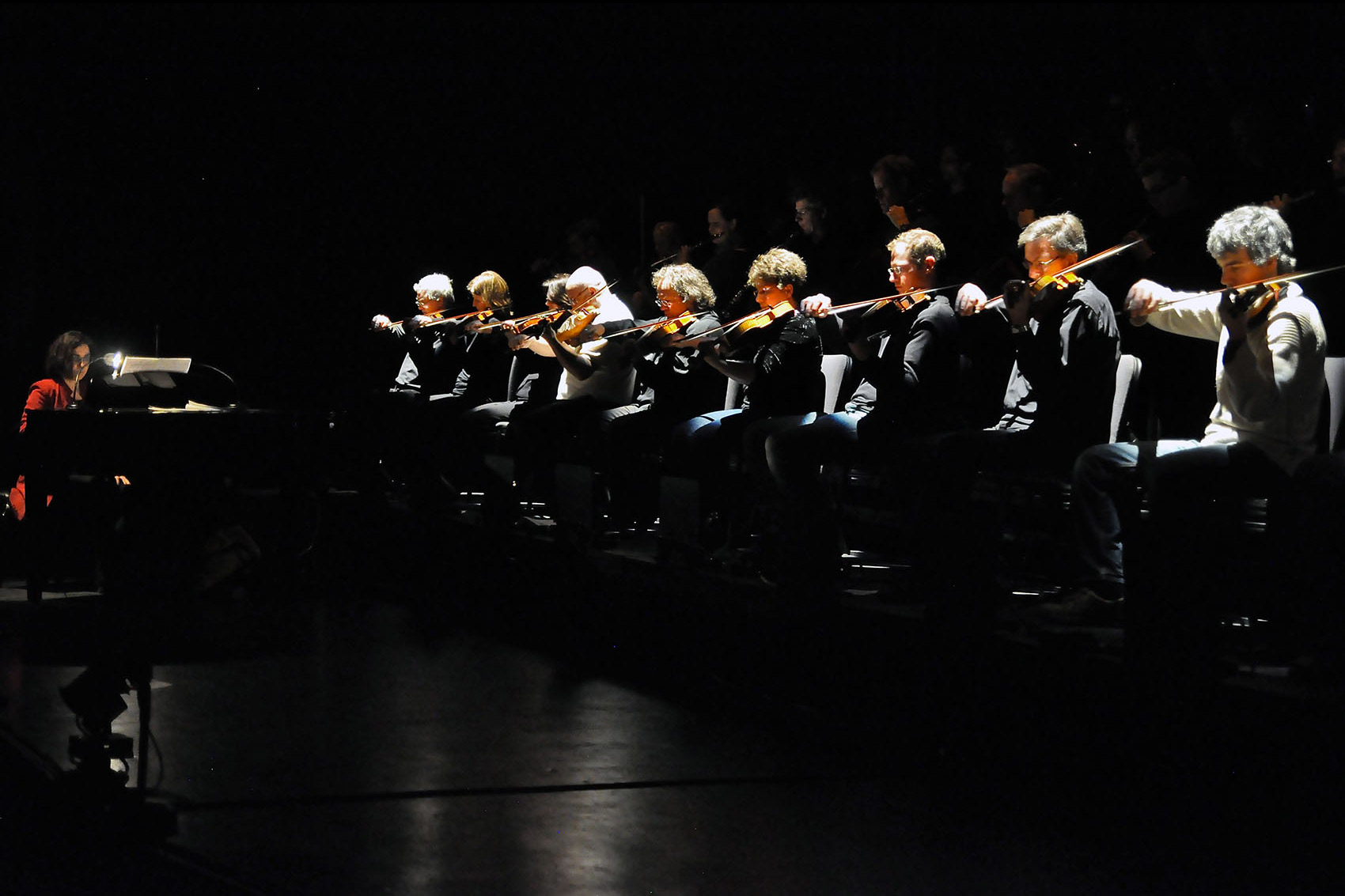 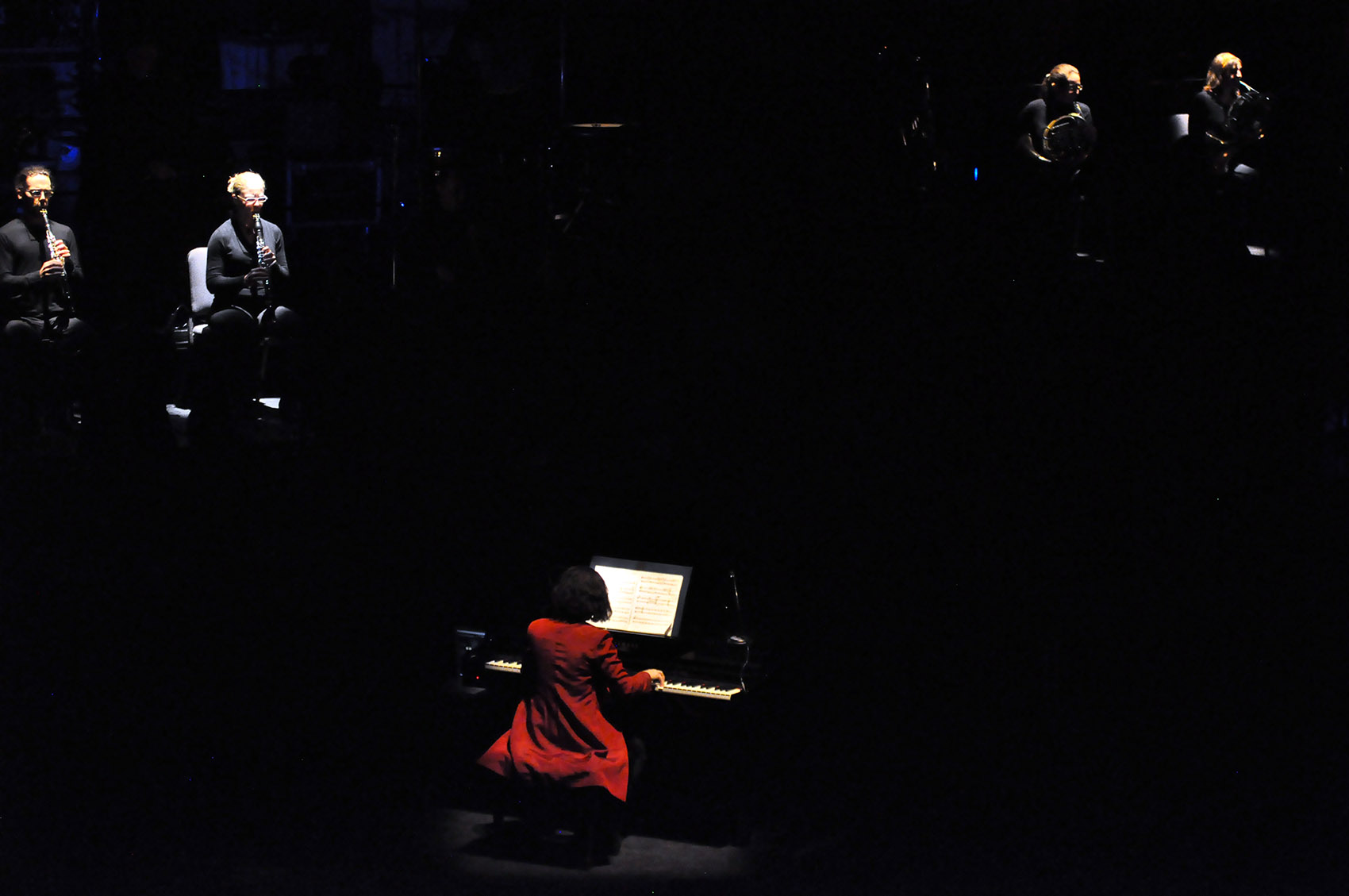 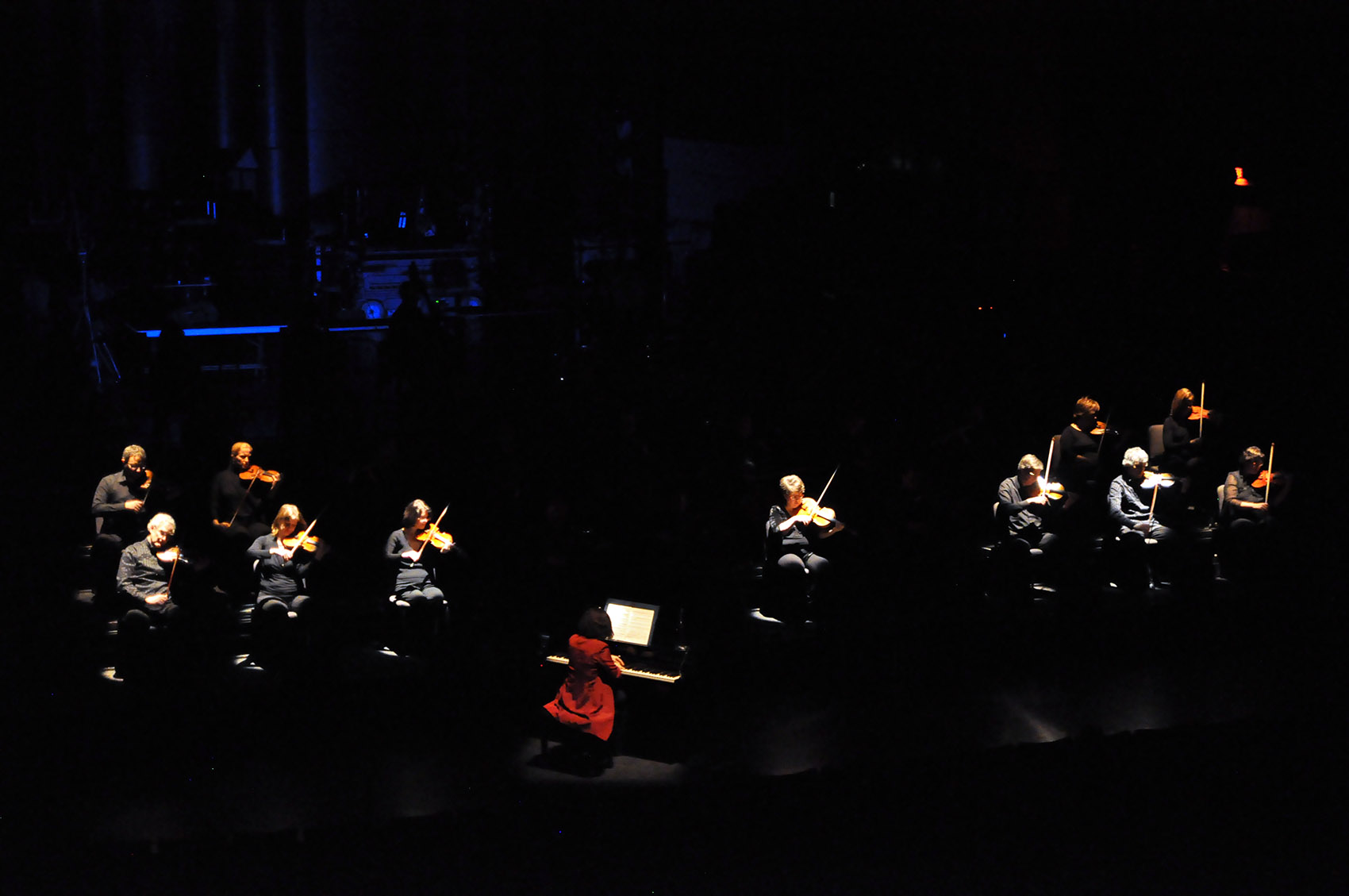 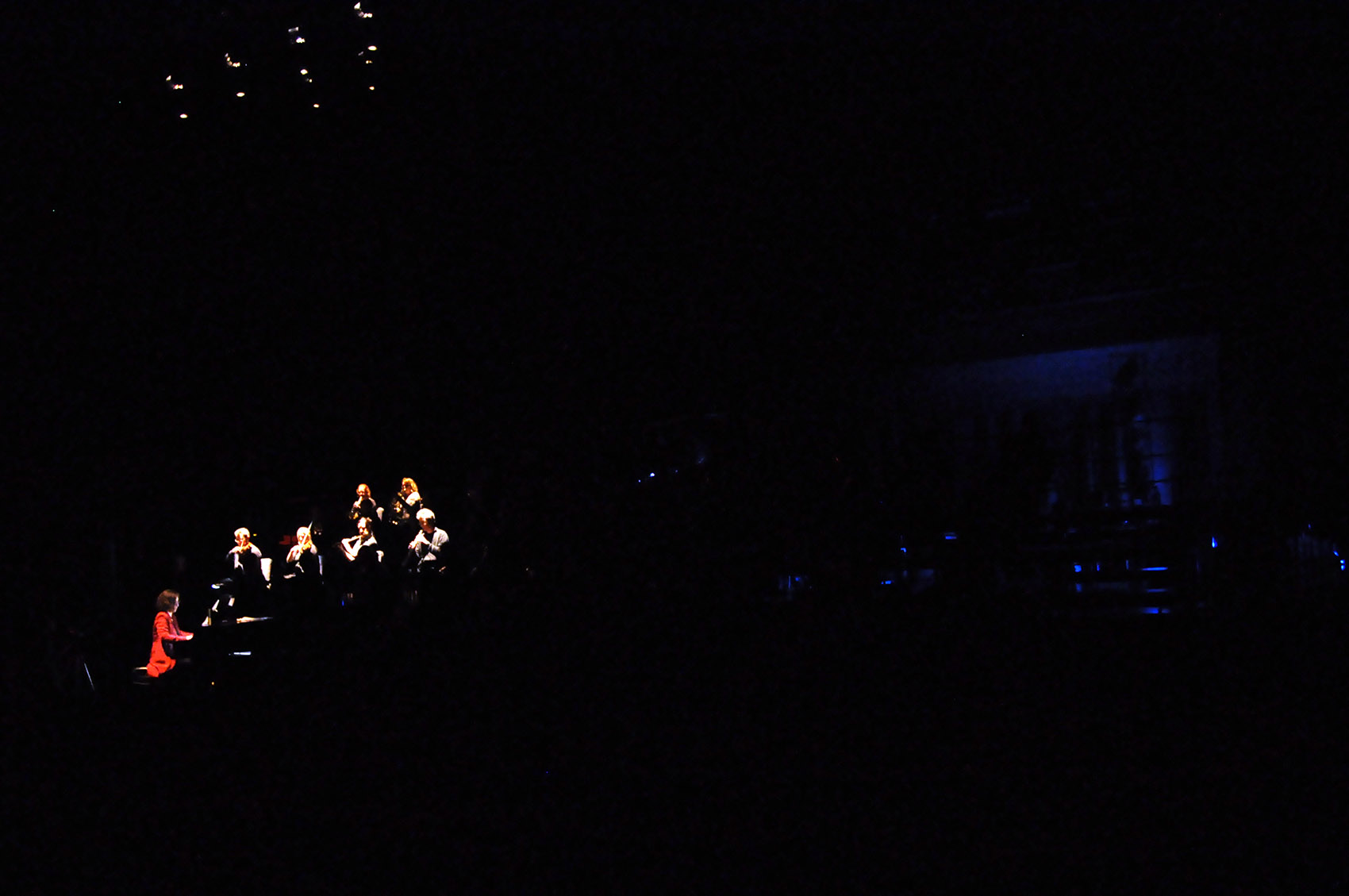 In 2012, for the 14th edition of the MoisMulti festival, RectoVerso Production commissioned an original work for the Quebec Symphony Orchestra.

With Pho:ton, the public is invited to an unusual performance for the classical frame of a concert hall: the director of the orchestra is replaced by a pianist; when the pianist plays, it activates a series of lights which in their turn induce the execution of a sound by one or several instrumentalists. A puzzling sensory experience, conveyed by this fabulous machine, embodied by the orchestra, where light and sound combine to create a work of a complex simplicity.

In the logic of our researches on the relationship between movement and sound, a symphony orchestra represented for us a particularly stimulating material. In our mechanistic approach, we considered it as a machine, a set of mechanisms (the musicians), interconnected by a program (the score) and activated by an operator (the conductor). This observation is a little reductive and not flattering for an orchestra, but for us it defined a basic structure, a starting point to create an orchestral work, not only musical, but also plastic and visual.

Since the beginning of the industrialisation in the XIXth century, machines have always captivated people. Particularly machines whose mechanisms are simple and understandable. The steam engine, the clock or the first automatons, fascinate people by the immediacy of the transformation process from energy to mechanical movement. Wanting to understand is a human trait. Humans are sensitive to the concrete, and especially to the readability of causal relationships.

We thus tried to render the mechanisms and systems that build our sound works more obvious. This is how Pho:ton came to be created. Pho:ton is an impressive sound machine, in which the musicians are simple mechanical elements. The belts used in a conventional machine to connect the elements are replaced by beams of light controlled by an operator. Only the smell of the oil is missing.

This radical simplification brings a lot of efficiency to the musical expression and offers to the listener / spectator a new way of perceiving the orchestral work. It also offers to the composer a new logic in musical writing because the entirety of the work is reduced to a single score.

The machine Pho:ton consists of forty musicians composing a set of autonomous and distinct sound mechanisms controlled by an operator. Every musician works in a continuous way by producing a sound that corresponds to that of its own mechanics and the engine that activates it. A rumbling and pulsing sound which he produces by muting his instrument.

The operator is a pianist. His instrument is a control desk, the keys do not hit strings but switch on and off a number of projectors. Every key is assigned to a projector, which is directed on a particular musician. As a soloist, the operator interprets a musical score, which is a little bit different from a classic score by the fact that the heights of notes don?t indicate frequencies but tones.

To allow the spectator to better grasp the relationship between the interpretation of the pianist and the switching on and off of the projectors, the musicians are arranged in a checkerboard pattern on tiered rows.

The notions of movement, strength and transfer of energies, typically physico-mechanical parameters, turn into explicit musical parameters for the spectator, thanks to the simplicity of the system.

The orchestra and the music

We disposed the musicians in a way that reaches a compromise between the traditional logic of the distribution of tone in the orchestra and a disposition that offers the best potential to the movements of lights. The assignment of the keys of the piano to the musicians of the orchestra is made according to the musical specificities of each part of the work. The work is divided into three parts. For each part, each musician must memorise in advance a note and the way of playing it (continuous, by repeating it?)

The musical composition emerges from an evolving bruitist structure. Spectral textures compose and decompose according to the movements of the light. They burst into the zones of intense light, appear subtly in the weakly lightened zones, and take back their muted pulsation in the darkness.

The first part plays on the extraordinary wealth of nuances of the orchestra. It begins with a duet of tuba and snare drum. From this dialogue emerges a cyclic, musical scaffold, composed at first exclusively from harmonies of strings. It then enriches itself by gradually encompassing the other instruments of the orchestra to finally bloom in exchanges of highly subtle and transparent sound textures.

The more radical second part begins with a musical movement that has a mechanical character. It develops together with the displacement of large light surfaces literally sweeping the orchestra, and rises to huge conglomerate clusters. Violent and bitter tutti spring up to paroxysm of strength.

The third part, more melodic in character, develops around the superposition of homophonic staccati whose tone and rhythmic subdivision differ from one instrumental group to another. The light methodically activates the diverse instrumental groups and creates geometrical and symmetrical movements. This results in a repetitive musical form whose harmony and timbre are constantly changing and subtly plays with the notions of tension and relaxation.