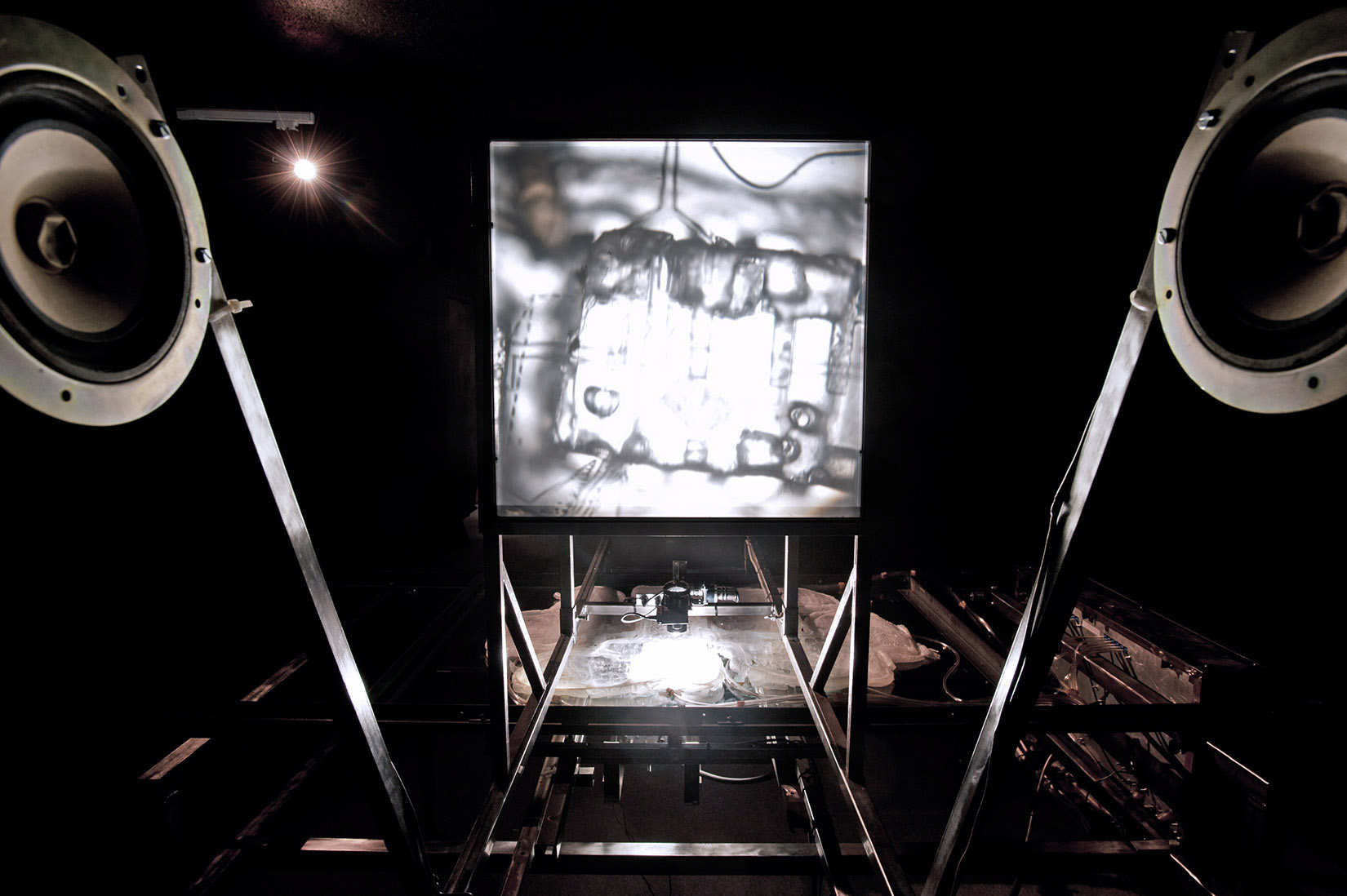 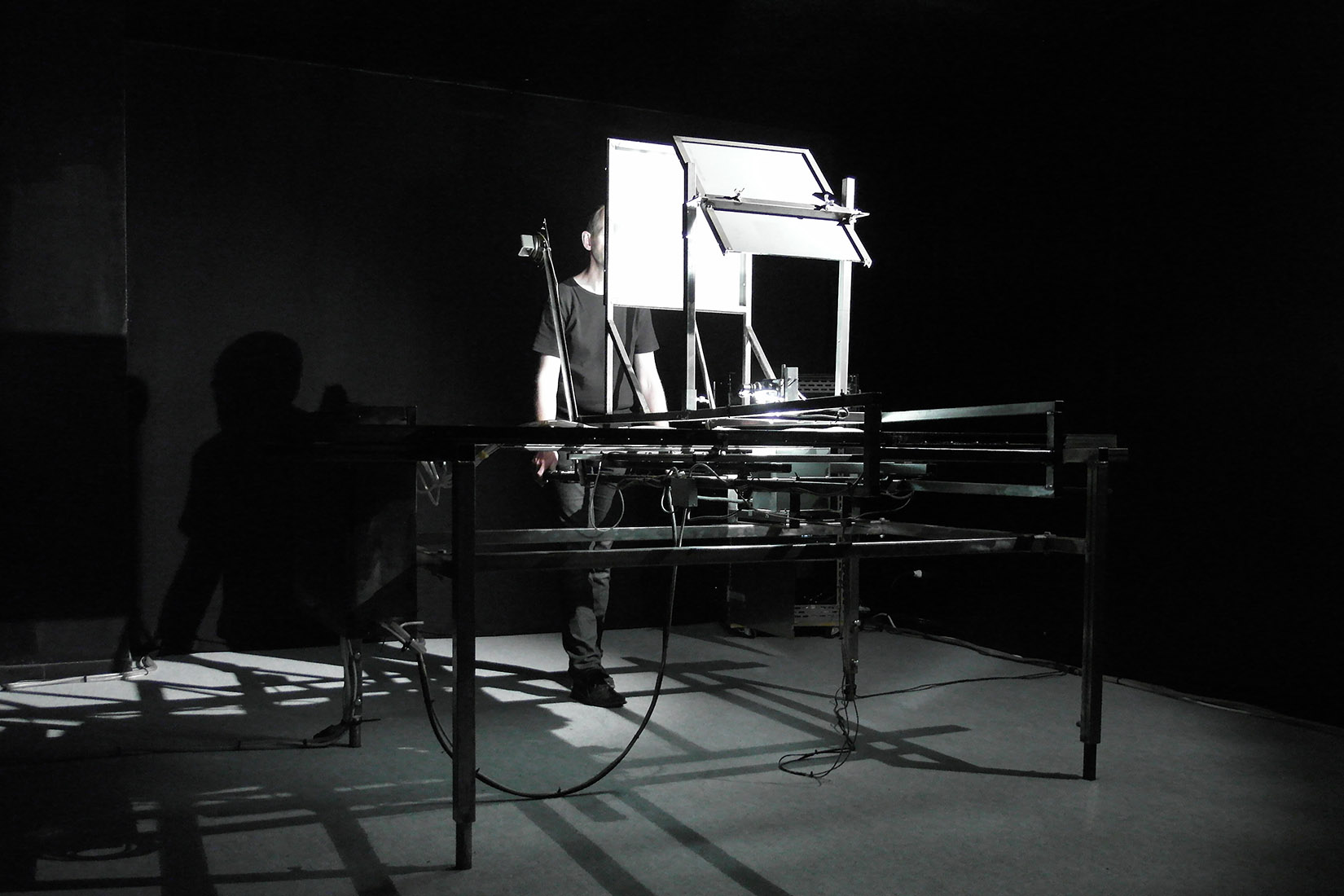 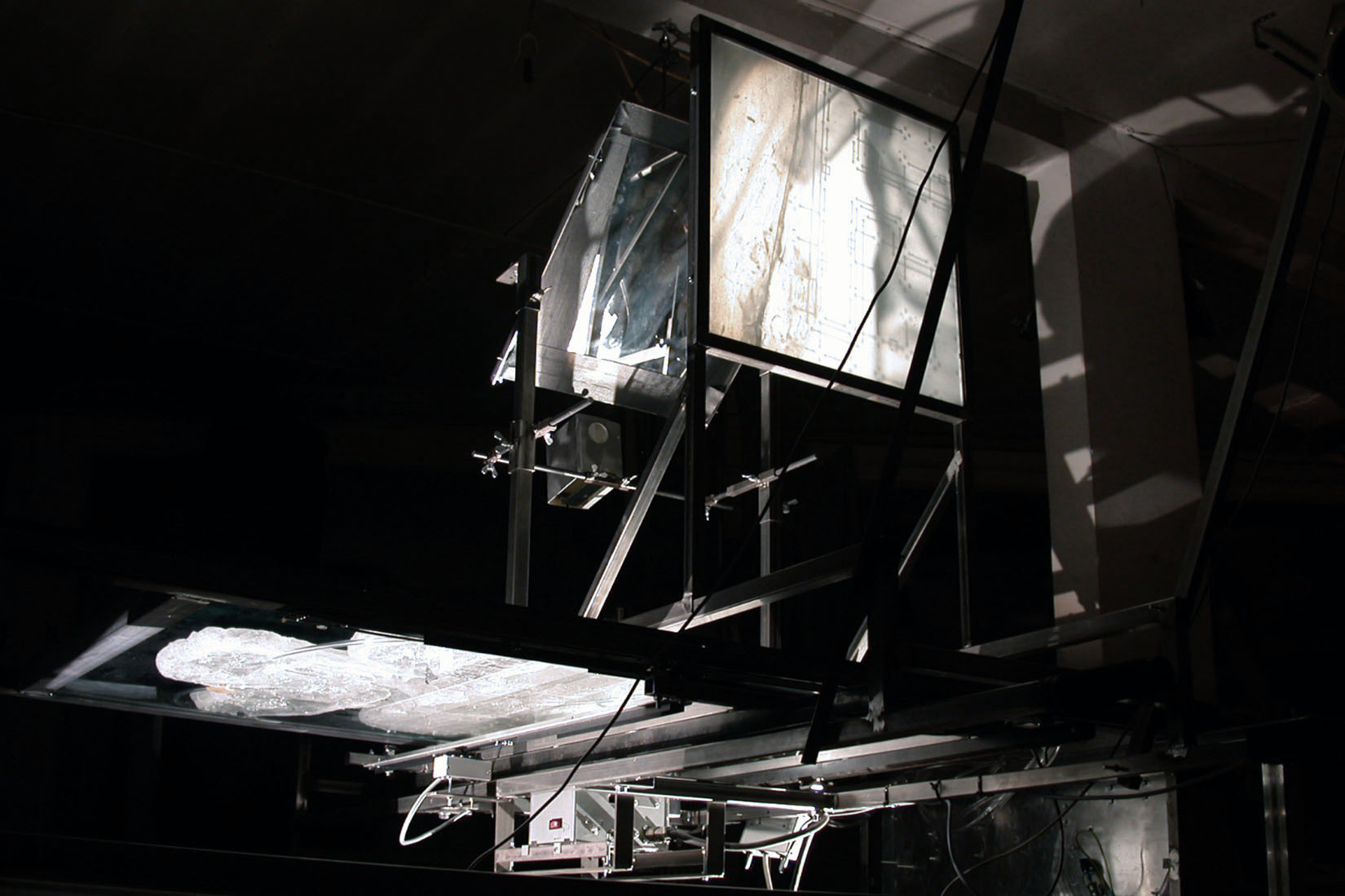 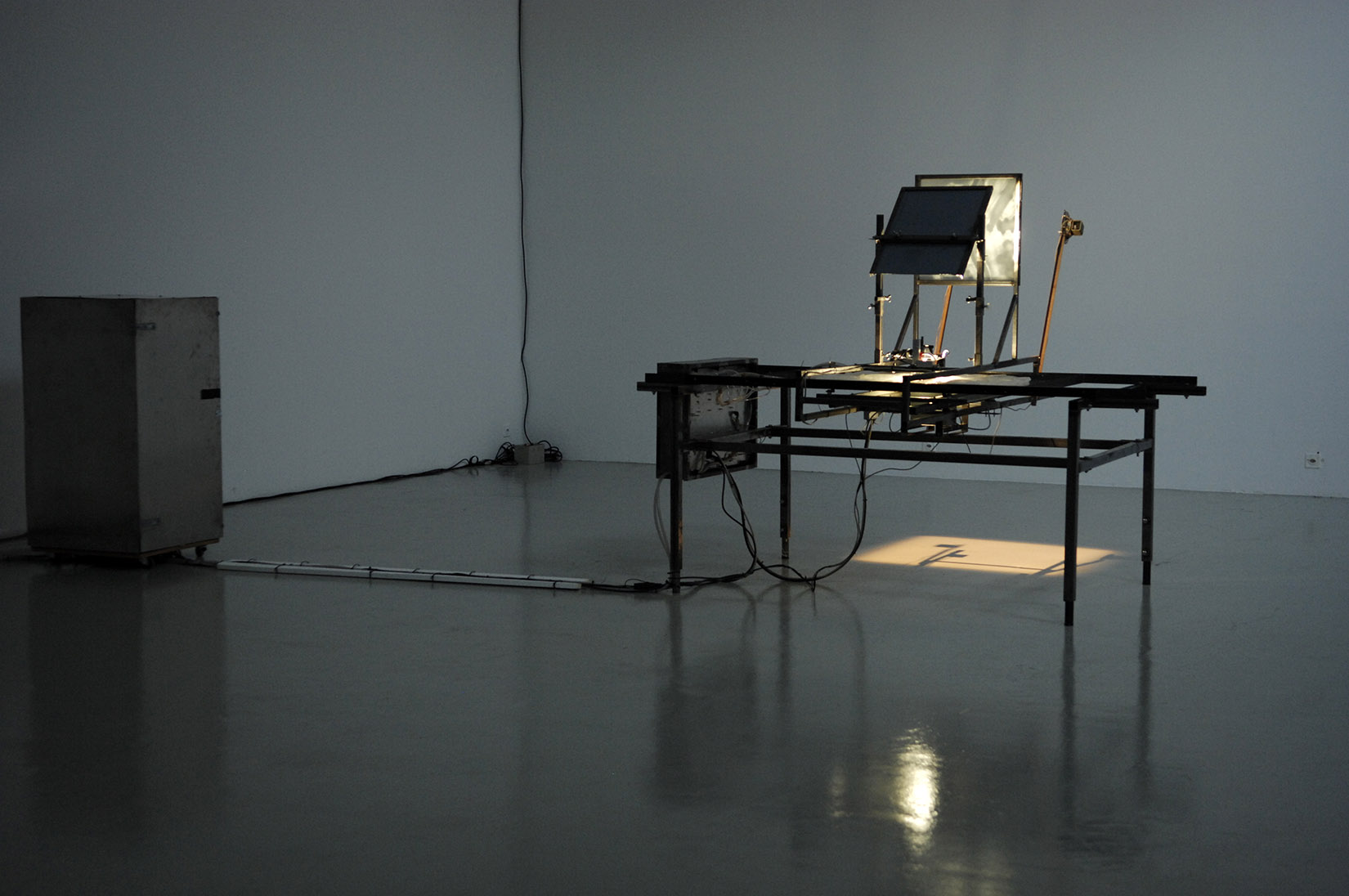 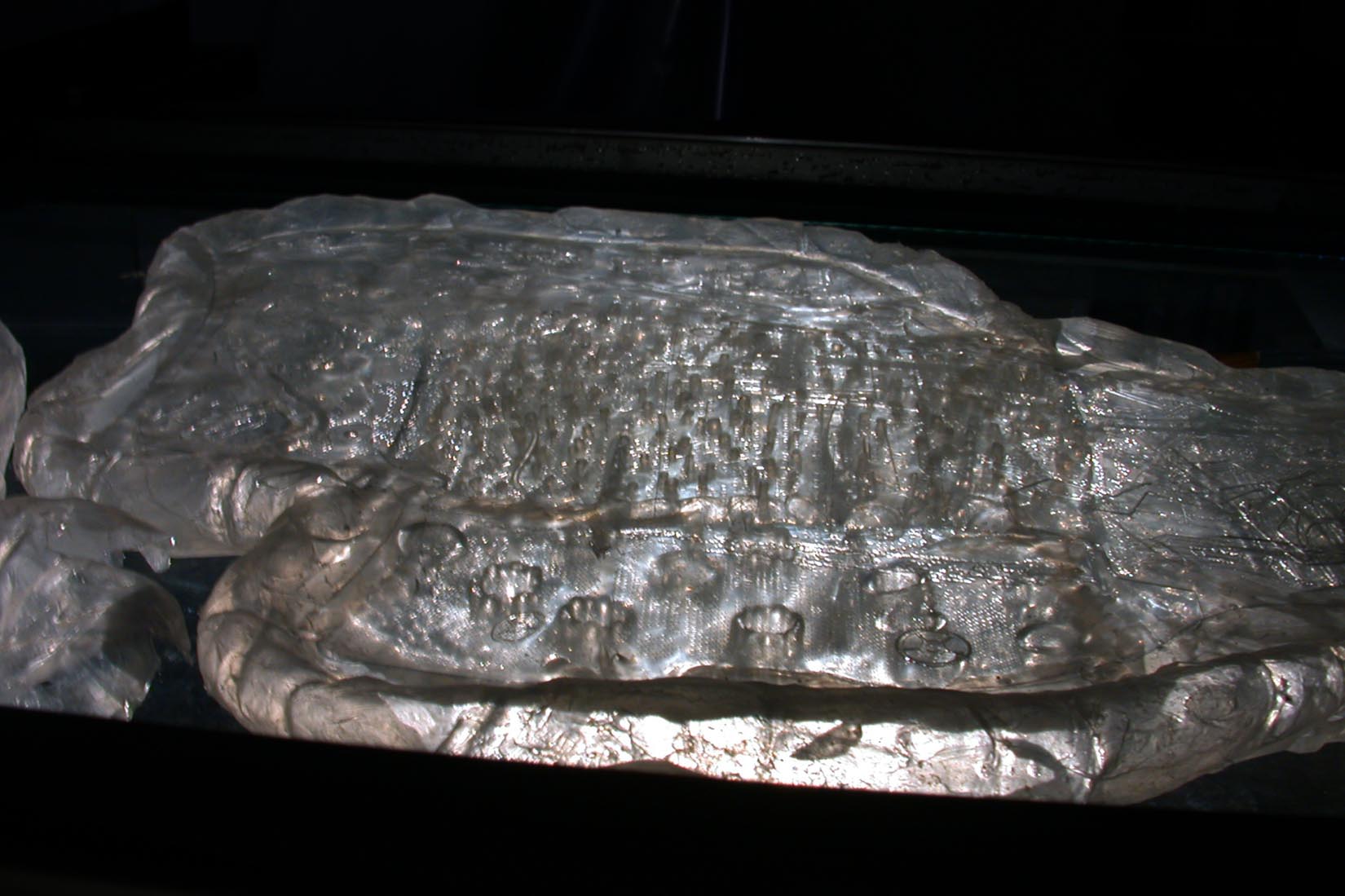 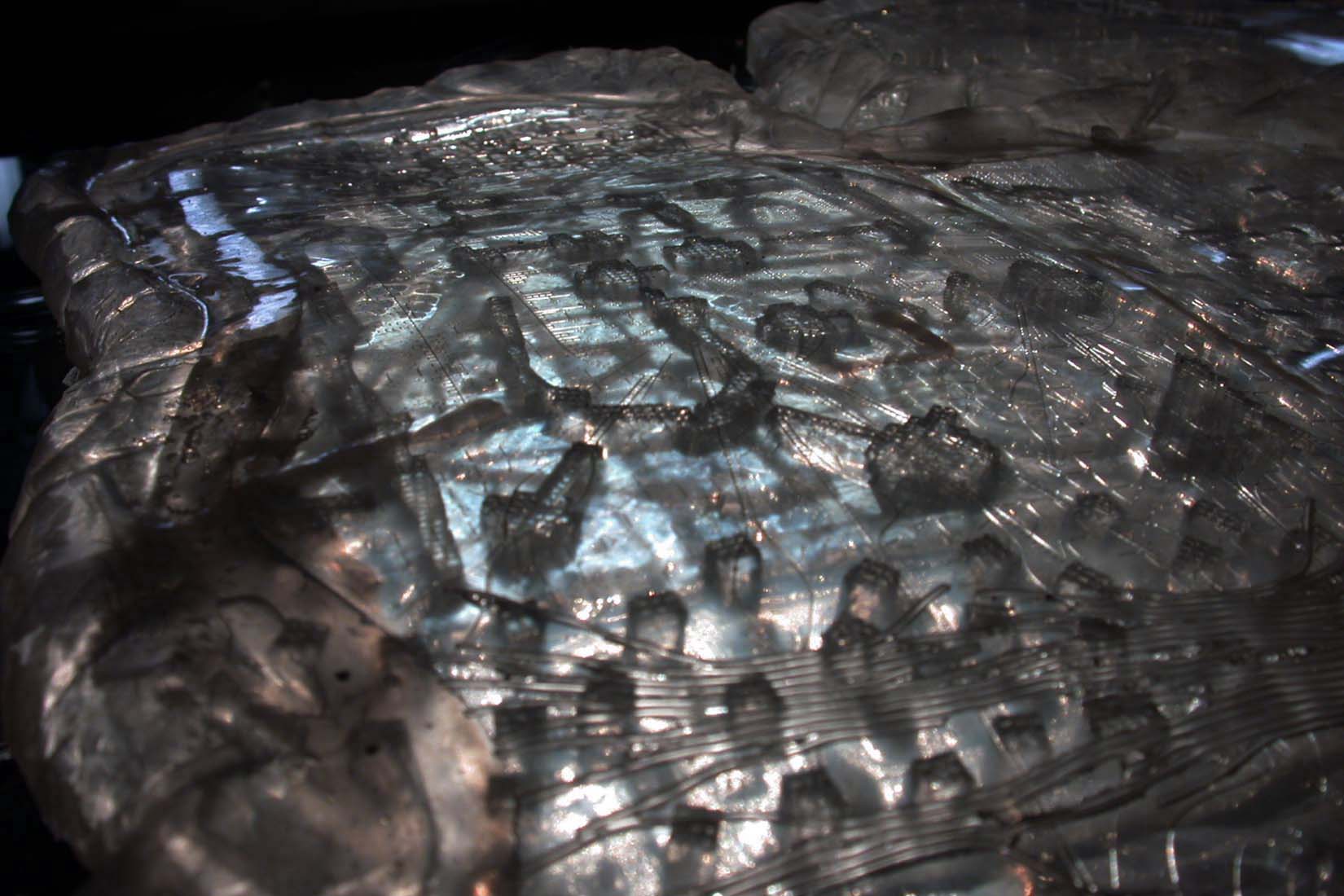 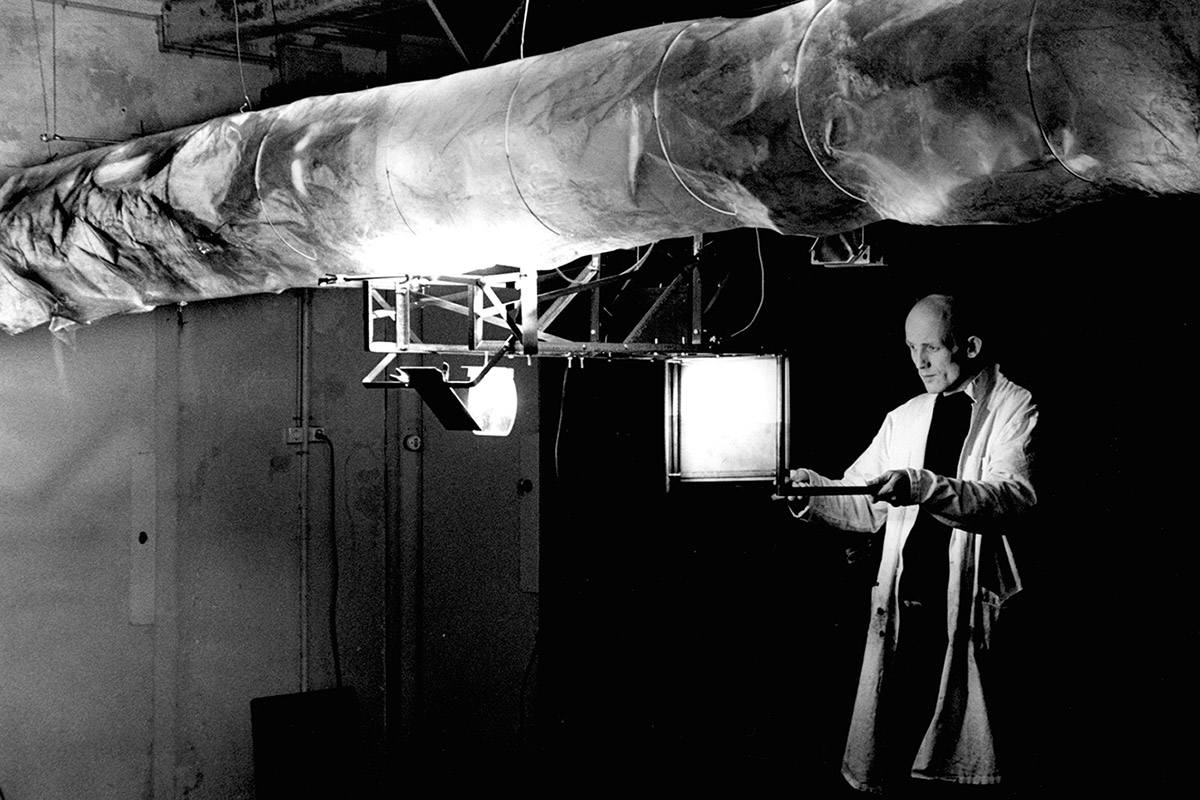 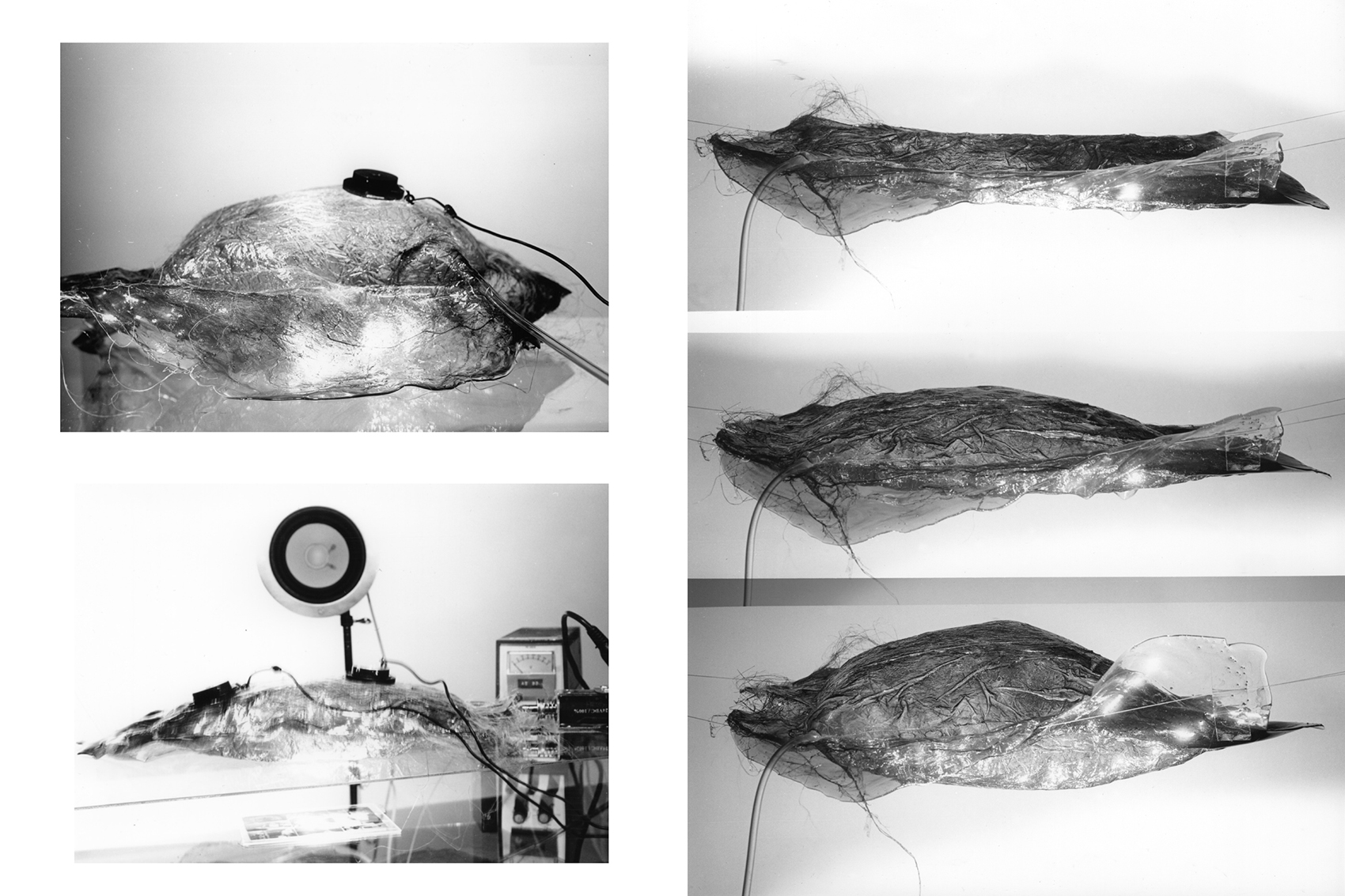 Cod.Act has developed a new installation, a mobile scanner with which one can explore the depth of a synthetic human brain. Isolated in a room, at close quarters with the brain, a visitor embarks on a visual and acoustic incursion in a animated and translucent universe.

As the scanner hovers over the brain, its light beam stimulates areas of the brain, which enter into motion, dilate and produce sounds. The brain releases fragments of information trapped within its tissues, traces of past sensory contacts with the external world.

By simultaneous retransmission of the scanning operation, the individual adventure reaches beyond the confines of the room and becomes accessible to the outside world.

]insofern[ is an installation made up of a counter with a glass plate on which lays a translucent body in permanent motion. Standing over the body is a movable device consisting of an optical system with a screen (the scanner) and two loudspeakers (the stethoscope). Visitors can move this device over the entire surface of the body, exploring its innards and experiencing in real time, through sounds and images, the progress of their investigation.

In ]insofern[, Cod.Act’s interest focuses on live matter, a mass that at first appears as uniform and inert, but within which countless amounts of complex and intelligent mechanisms are at work. The brain is a particularly appropriate comparison. A brain comprises functional areas and interconnecting structures that work in concert. A brain is capable of receiving, processing and storing a continuous flow of incoming data. With ]insofern[, an interactive installation to explore the brain, Cod.Act did not create a means to travel through the trails of memory, through a patchworks of images representing reminiscences. Rather, the installation offers a sensorial experience, right within the core of the brain in full activity. ]insofern[ is an empirical model of an infinitesimal part of the brain, many times enlarged.

Insofern challenges the visitor to penetrate and discover this organic universe, go into this matter in constant mutation, see it expand, move, and hear the sounds released in answer to the various phenomena implicated in the processing and transport of data across the functional areas of the brain.

The synthetic brain of ]insofern[

The body in ]insofern[ is a counterpart of a non-vegetative area of the brain, where mechanisms related to intuition and personality are located. The body is divided in four distinct but interconnected parts, corresponding to thought, knowledge, social relations and emotional centres. Each of these parts possesses a morphology in relation to its function. There are two layers in each part, each stores data as abstract and barely decipherable sound and visual prints.

The top layer receives sensorial data from the outside world. It tests its validity, and defines its value based on parameters and judgements characteristic to each individual, such as ego, profit or moral ethics. It acts in a rational way. In this layer, visual and sound prints will appear as code. Fragments of musical or textual phrases act as guides in the data sorting process.

The bottom layer is thicker and of a more organic and coarse nature. Prints within this layer are also sketchier but go deep within the body. They represent anatomical changes in the brain tissue, consequences of past experiences, or of nerve tissue agglomeration from old impressions, fragmented then reconstructed, or of data consolidated either through repetitions or because of their importance.

The two layers communicate, stimulated by the constant motion of the body. The scanner sees them either separately, or merged into one another or sliding one against the other. Visitors are met with an ever-changing panorama of images and sounds, with a representation of the brain’s transient and impalpable media where new and accumulated experiences consult each other, become concept and hypothesis, to eventually evolve into an assembly of logical scaffolds that dictate one’s behavior.

Visitors scan the brain by moving the device standing over it. The device has both a light source and a camera. Laying between them on the glass plate is the brain, like a slide in its projector. The camera projects an enlarged image of the part of the brain that is being scanned onto a screen. The brain is divided into 32 virtual zones, each much larger than the area visualised on the screen. The exact position of the scanning device defines on the one hand the sound sequence that will be transmitted, on the other hand the sequences of inflation and deflation of the brain and finally the sequence of movements of the objective of the camera. The objective is linked to the camera’s auto focus system. The movements of the objective are such that now the top layer of the brain, now the bottom one is in focus or the image floats between layers. There is also a manual cursor with which the visitors can modify the sharpness of the image. The totality of the measurements and commands are controlled by an industrial programmable logic controller.

Sound in ]insofern[ has two relationships with the synthetic body, one with each of the four parts of the body, the other with the organic structure of each part. Concrete voices were recorded and appear under different forms: now close and distinct, now organised in dialogs, now confused and spreading like a rumour, now muffled as if prisoners of the sound matter and only released in fragments.

The internal activity of the body is expressed by a sound arrangement combining reworked concrete sounds and fashioned synthetic sounds, a kind of amplification of the micro-sounds generated by its vital activity. Organic noises, such as breathing, wheezing and swallowing were recorded then amplified and reworked in the studio. They were combined together and mixed with synthetic electronic sounds also produced in the studio. They represent the electric current of the nervous system within the body. All these different sound elements are assigned to the different parts of the body.

A visitor scanning the body will automatically set off the sound sequence that corresponds to the area being scanned and activate a system that transforms the sound in direct relationship with the vertical position and movements of the objective. The transformations act on different sound parameters such as height and volume and also act on filters and modulators.