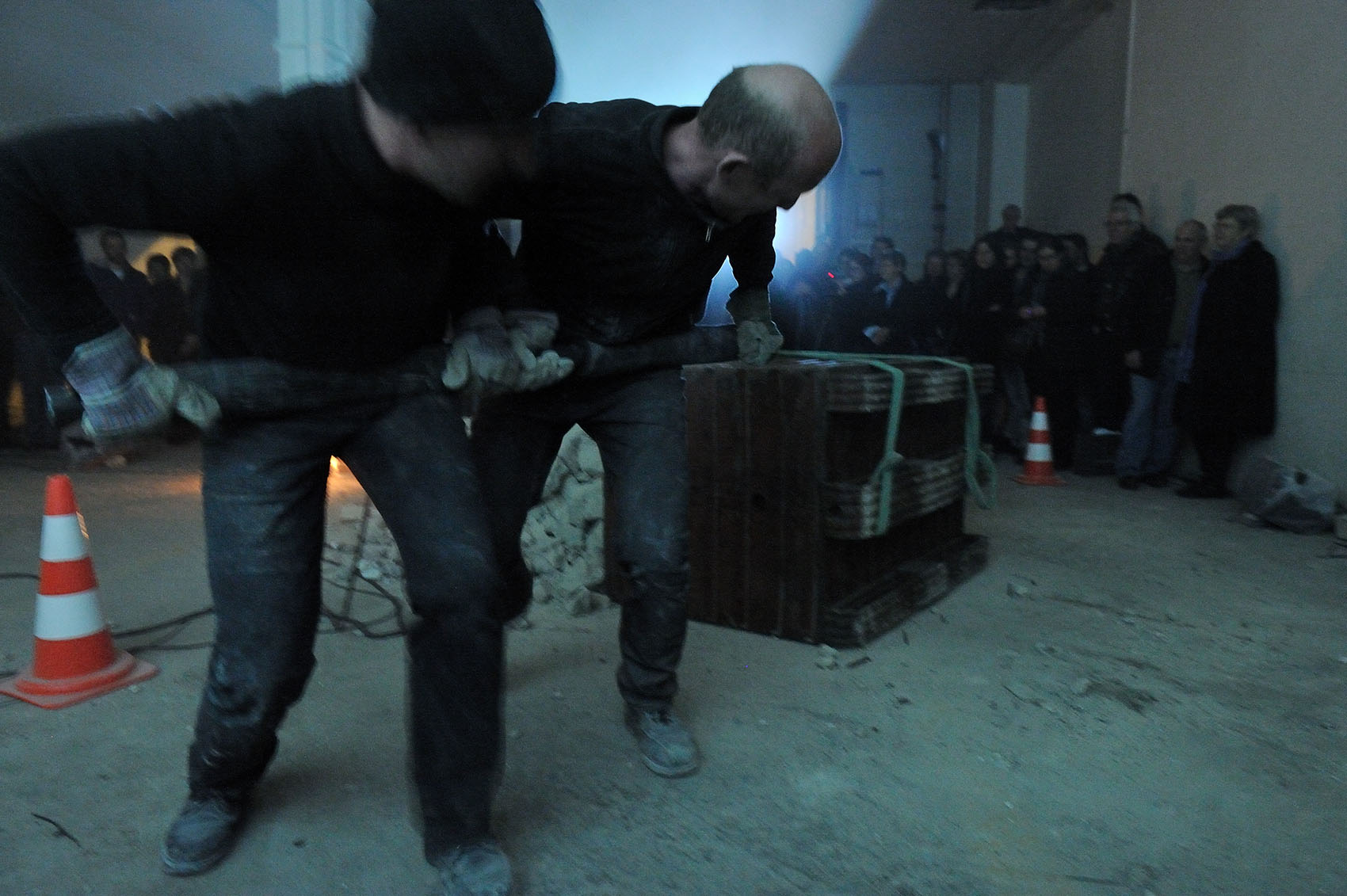 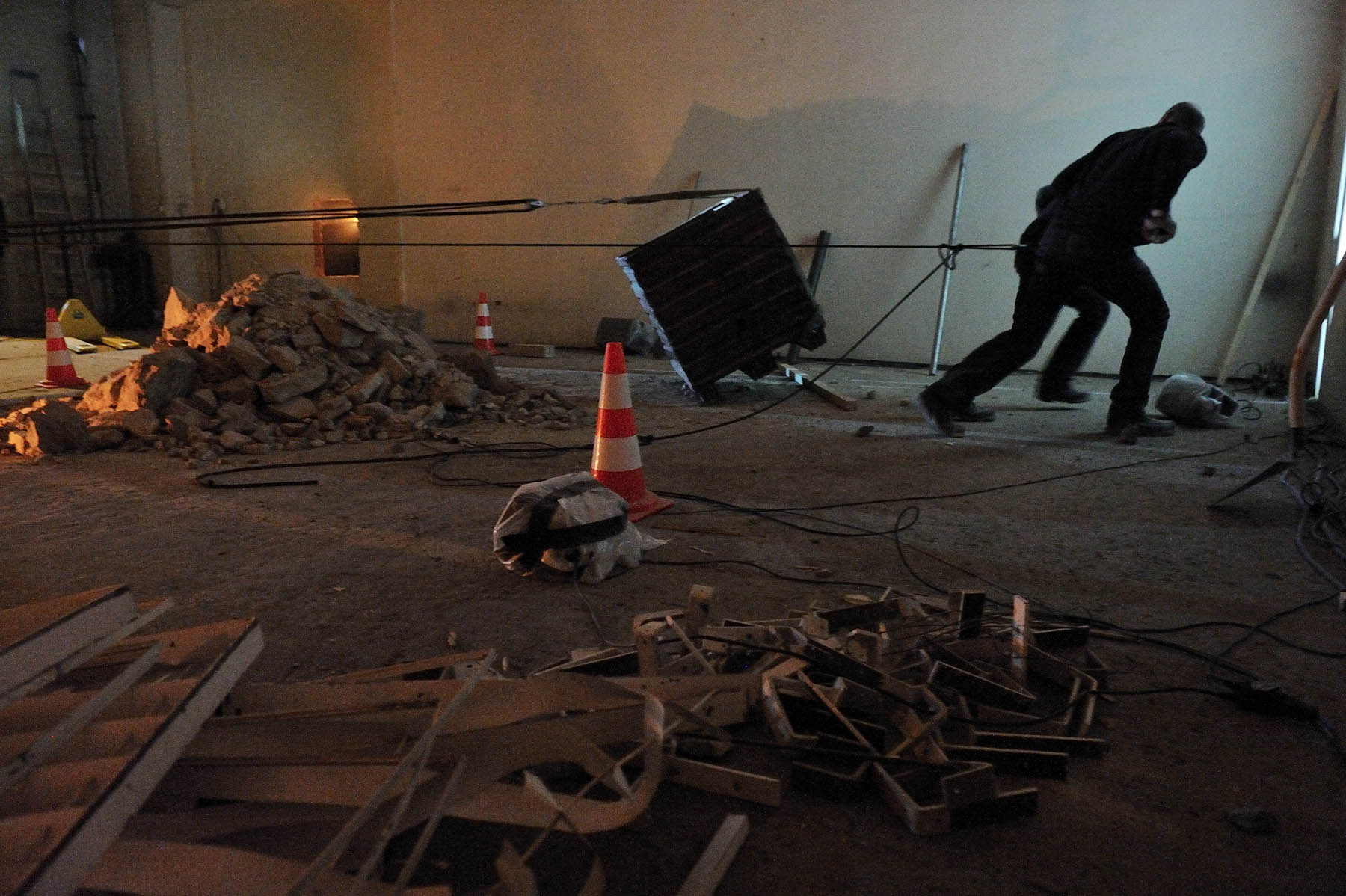 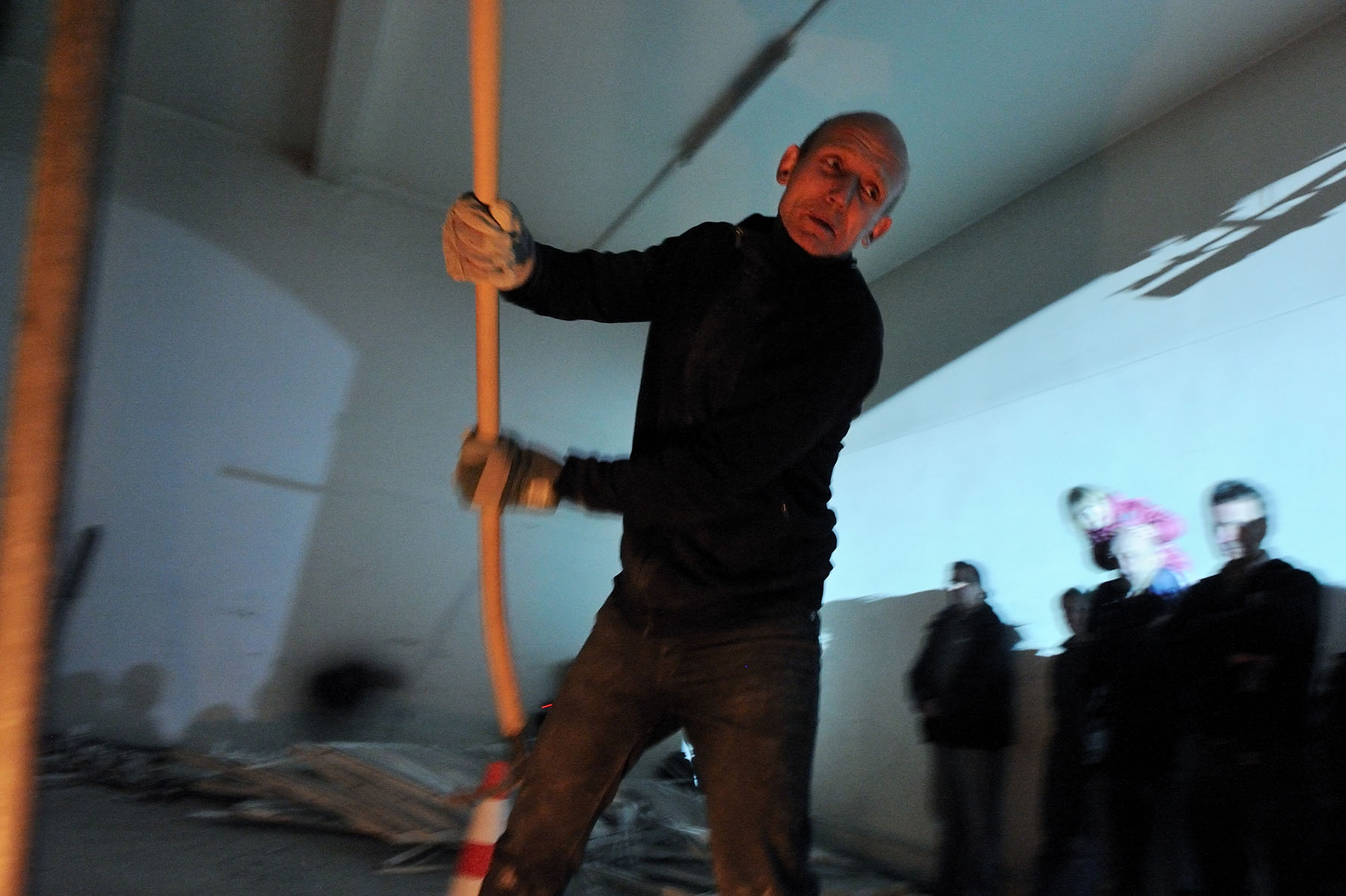 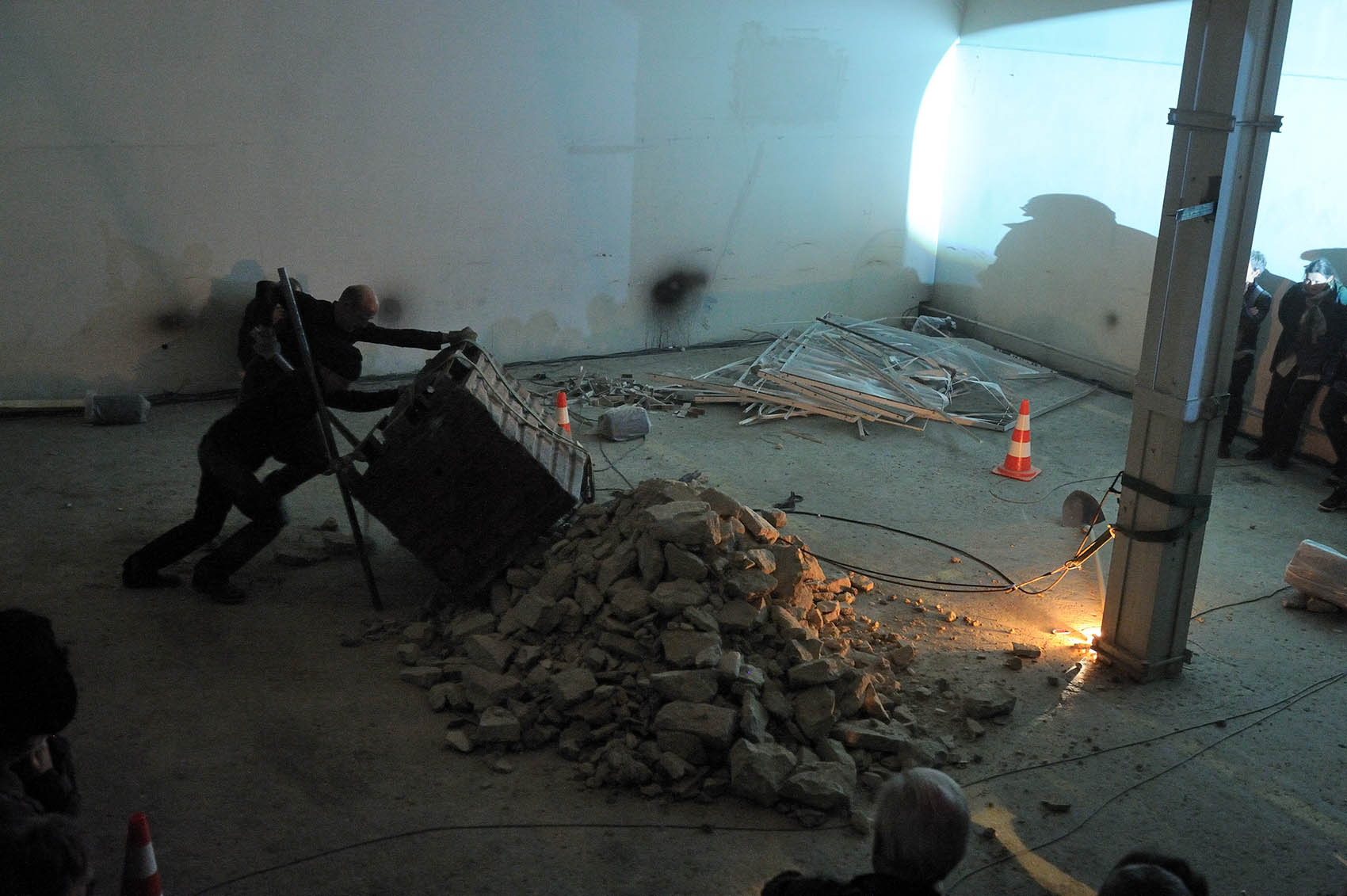 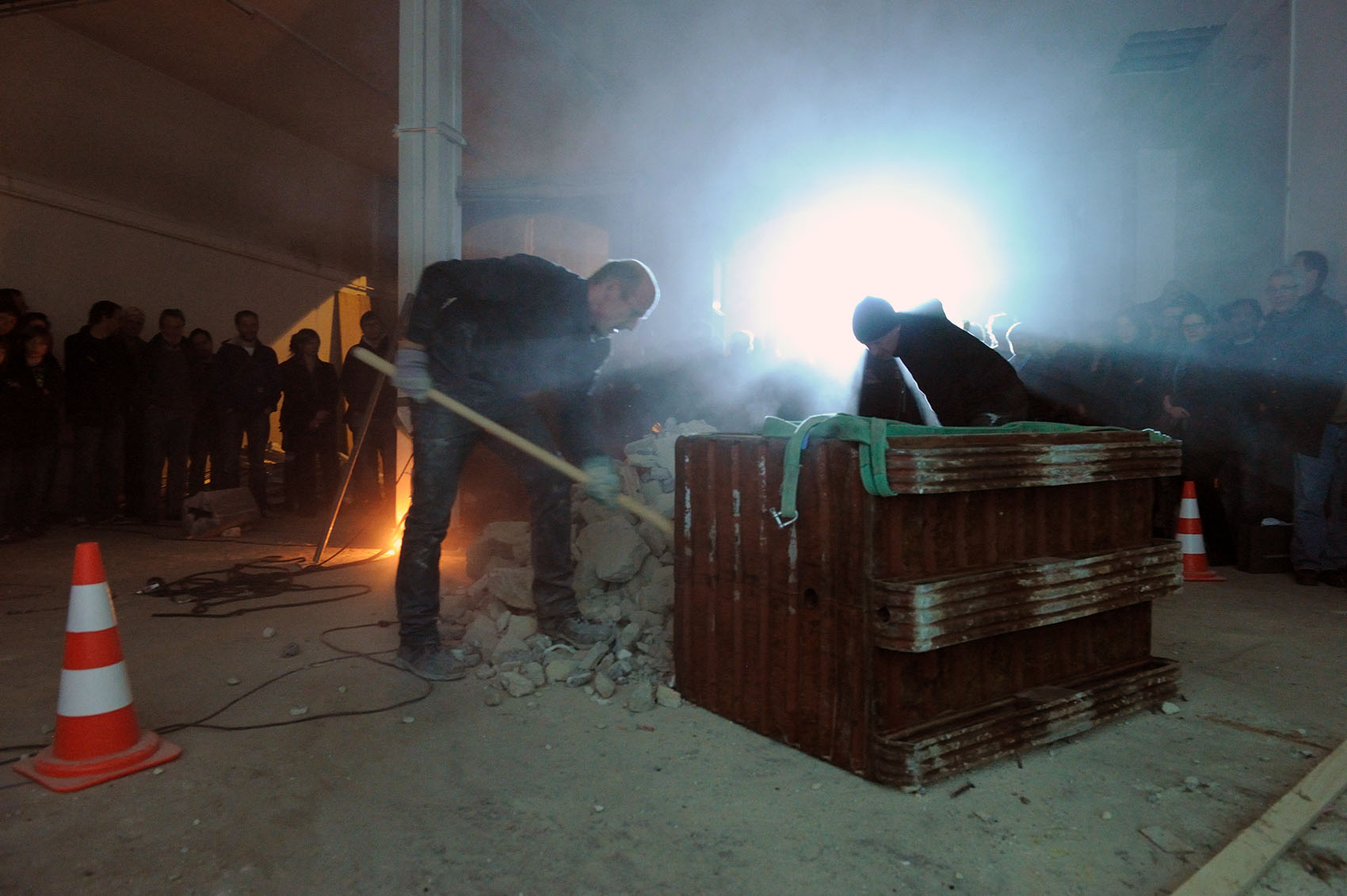 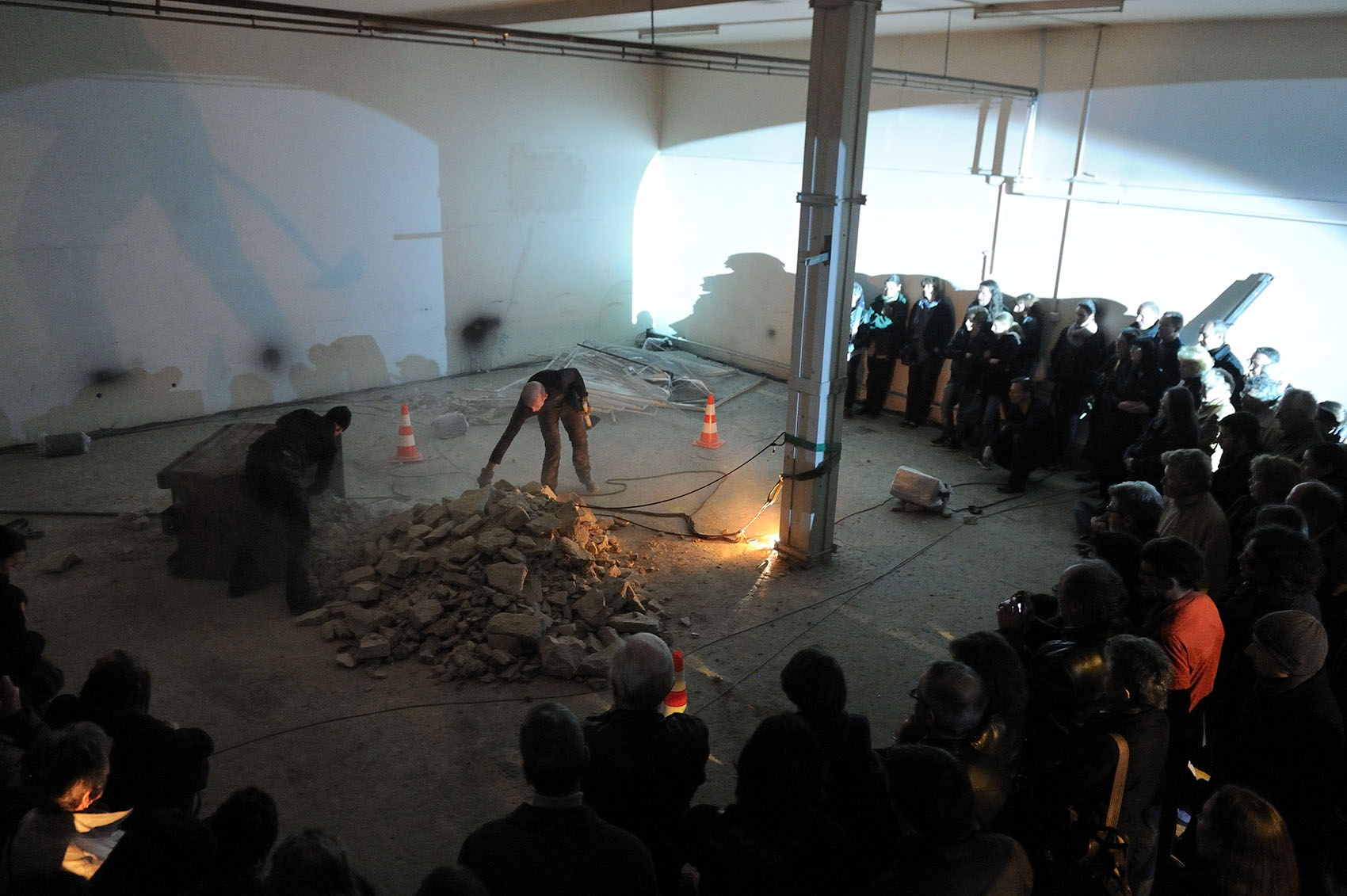 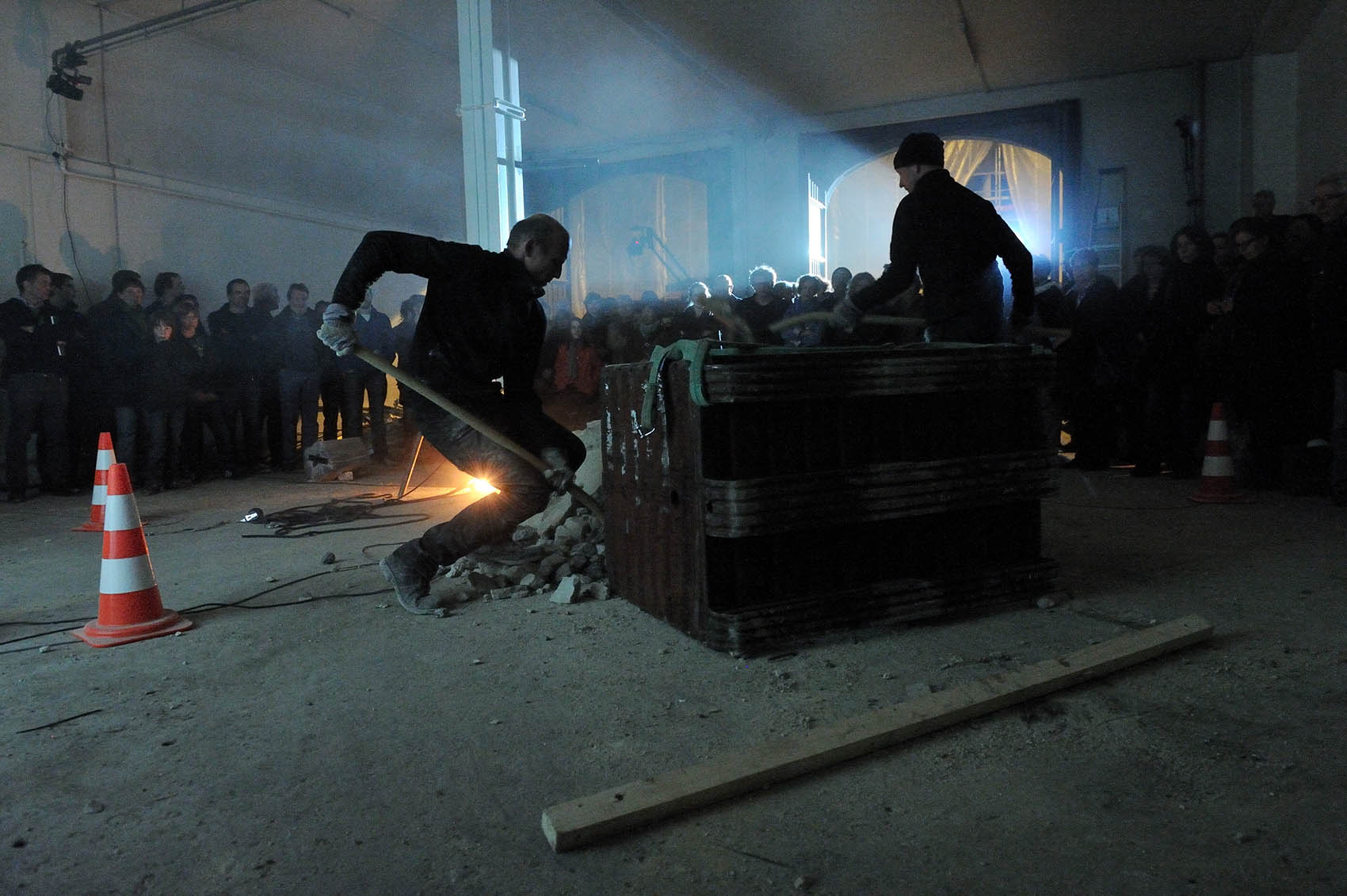 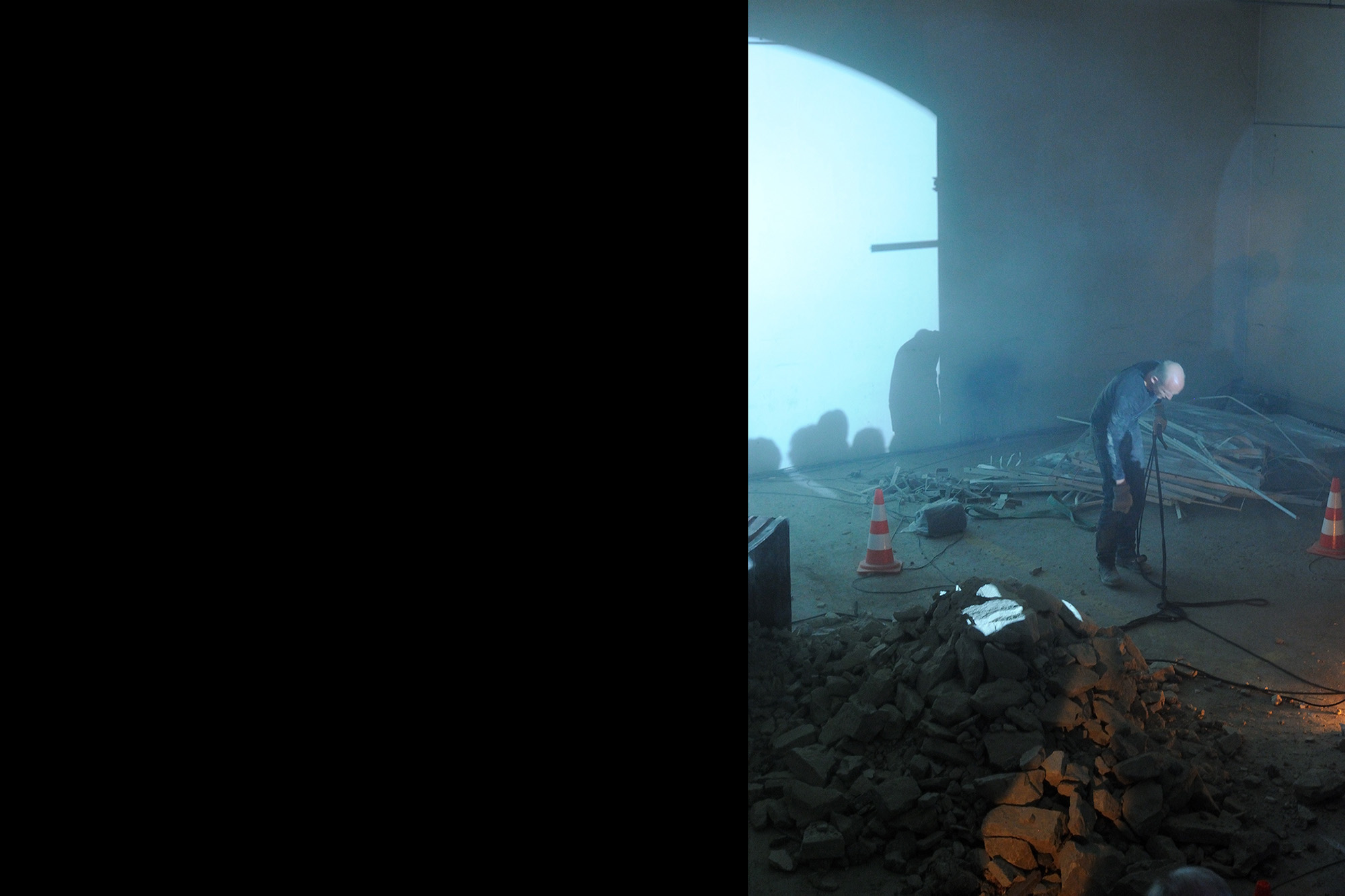 Siliknost III is a performance in which both artists work in a fictitious and clandestine-looking building site. They are engaged in a territory war with ghostly dogs attacking them from all sides.

In this ordinary setting, the gestures of the performers animate a complex, fictional sound universe. The strong suggestive effect of the scene results from the interaction between sound and movement.

Cod. Act works on the realisation of kinetic and sound devices. Under the form of mechanical machines or of human performances, these devices deliver various possible manifestations of the interaction between sound and movement.

Siliknost III is a new experiment that consists in separating the sound and the kinetic device in two different entities and in confronting them instead. Indeed, contrary to our previous works where the kinetic device determined the sound transmission, in Siliknost III the movement modifies a pre-existent sound environment, broadcasted by loudspeakers placed in the space.

In Siliknost III, the sound is not perceived as the result of the radiating kinetic phenomenon but as a material perturbed by the action of the device, as if the material was sculpted or moved from the inside.

To make sure that the experiment succeeds and that the interaction be new and above all perceptible, it is necessary that both the action and the sound material are concrete and recognisable. By choosing obvious sounds and ordinary situations, we render the relationship between cause and effect graspable.

In that way,the experience becomes at the same time semantic, visual and auditory. It is totally narrative. On the other hand, if sound and action were kept abstract, as in our previous realisations, degrees and variations of interaction would go unnoticed, all the more so with a spatialised sound.

The interest of Siliknost III is to materialise this concept by means of a simple and effective device: two workers carrying out an ordinary work, a sound environment composed by barks of dogs in movement. Sound variations are generated by knocks of shovels from the workers and different events on the building site. (trucks shifting, jets of rubbles).

The spatialisation of the sound, as well as the mechanical animation of certain elements on the building site, such as traffic cones or scrap heaps, evoke the movements and the excitement of the dogs around the building site. This dramaturgic construction is simple and extremely powerful: from simple gestures and raw sounds emerges a dark and disturbing story.

From recordings of dogs realised in kennels, several sound sequences were created by assembly, mixing, and treatment processing. These sequences are the sound of claws on the ground when dogs move, barks when they are angry, growls when they are ready to attack, or complaints when they are hurt.

These various sequences were stored in a computer and assigned to a spatialisator. 14 independent loudspeakers are placed on the ground.

During the performance, a technician follows the progress of the action of both workers by video. By means of the computer and of the spatialisator, he commands the movement of the dogs in the space. He controls their behaviour and their reactions to the diverse situations of the performance by starting successively the most adequate pre-recorded sequences.

By calculating in real time the proportion of sound that every loudspeaker has to broadcast, as well as by modifying artificially the resonance of the place, the spatialisator simulates faithfully and precisely the movements of the virtual dogs in the space. Augmented by their “vocal” expression, the virtual dogs generate a nervous, reactive and aggressive sound environment around both workers.

This results in a very dramatic performance, thanks to the maximal exploitation of the suggestive potential of the sound.