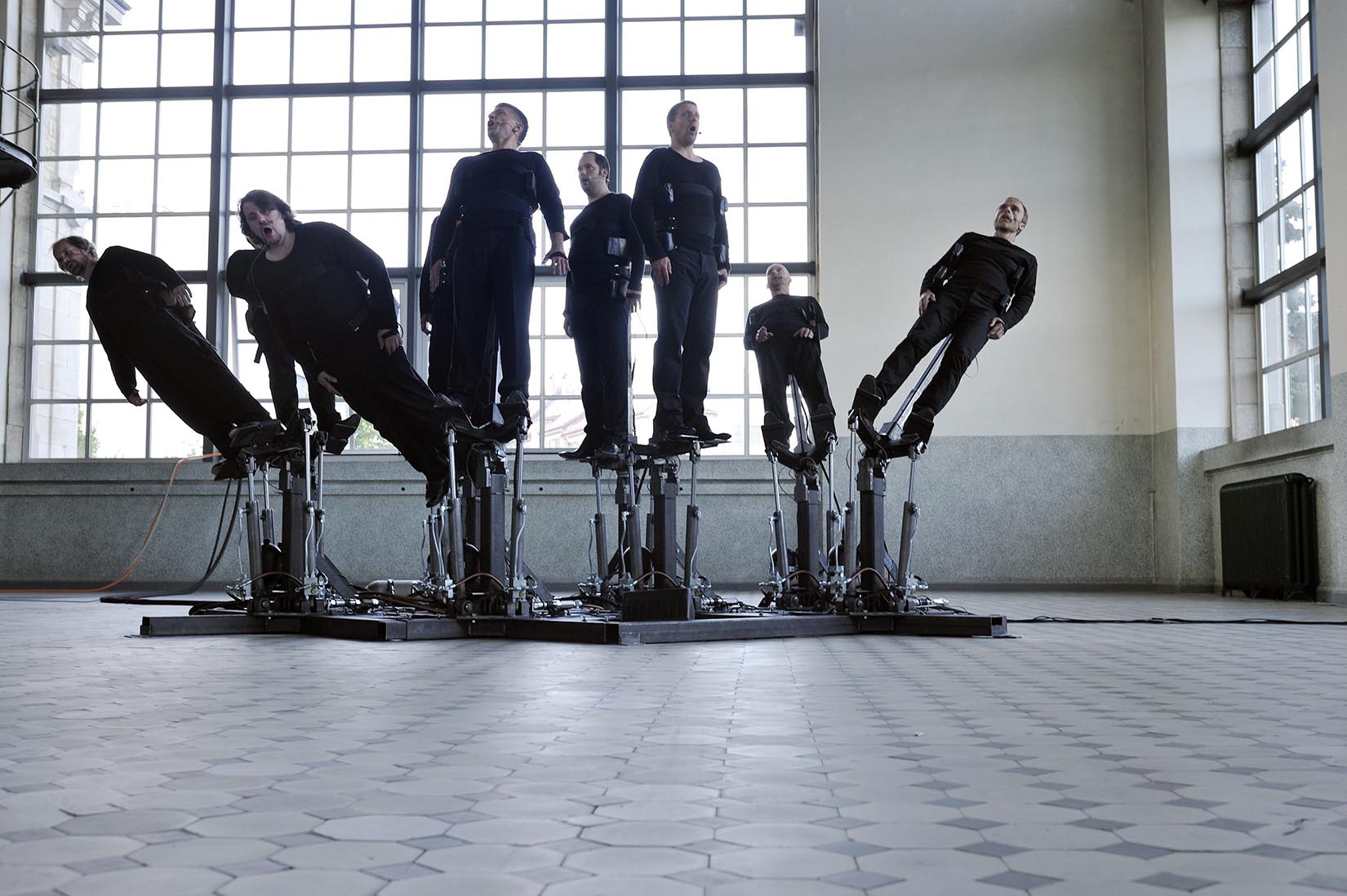 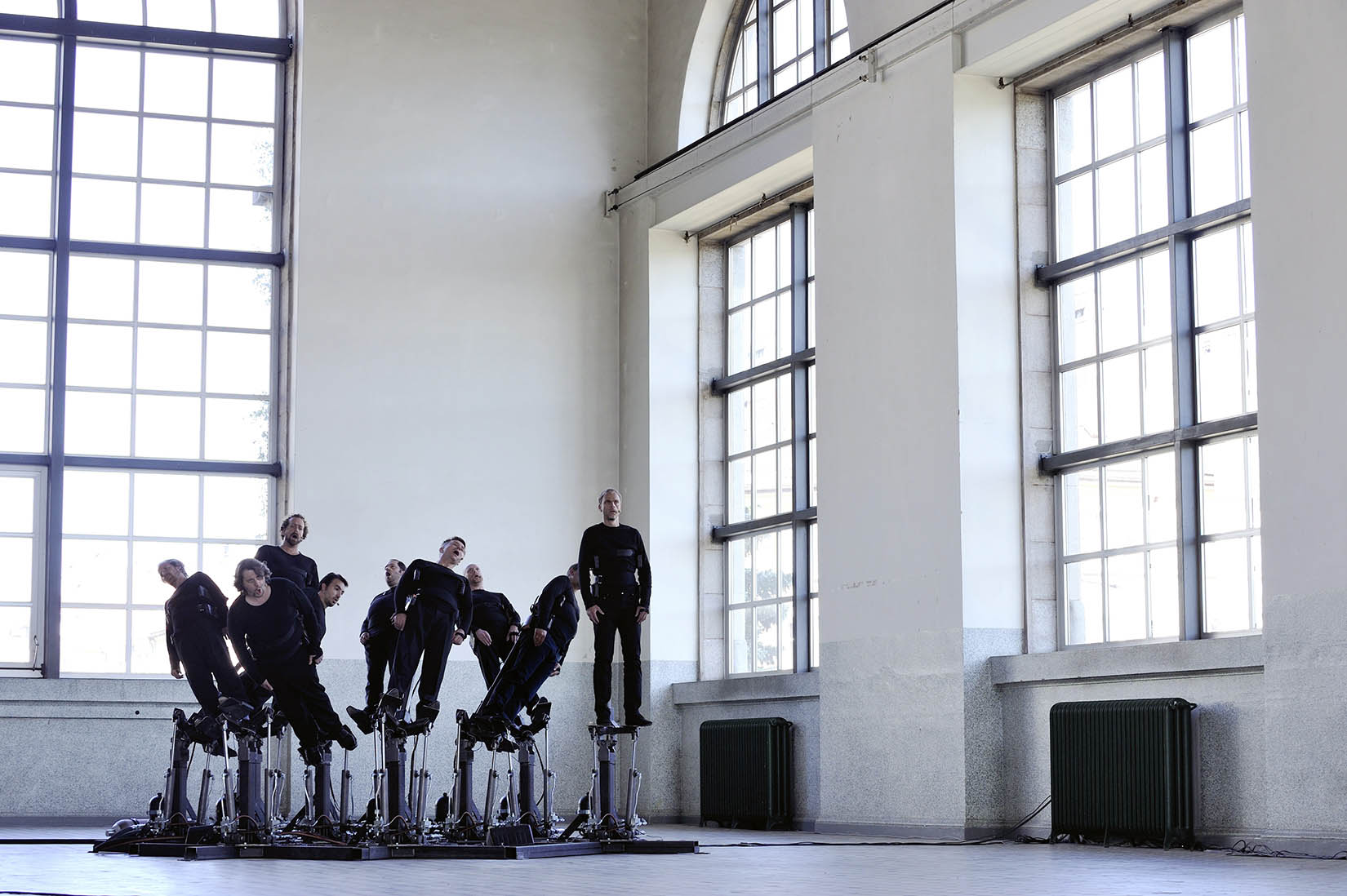 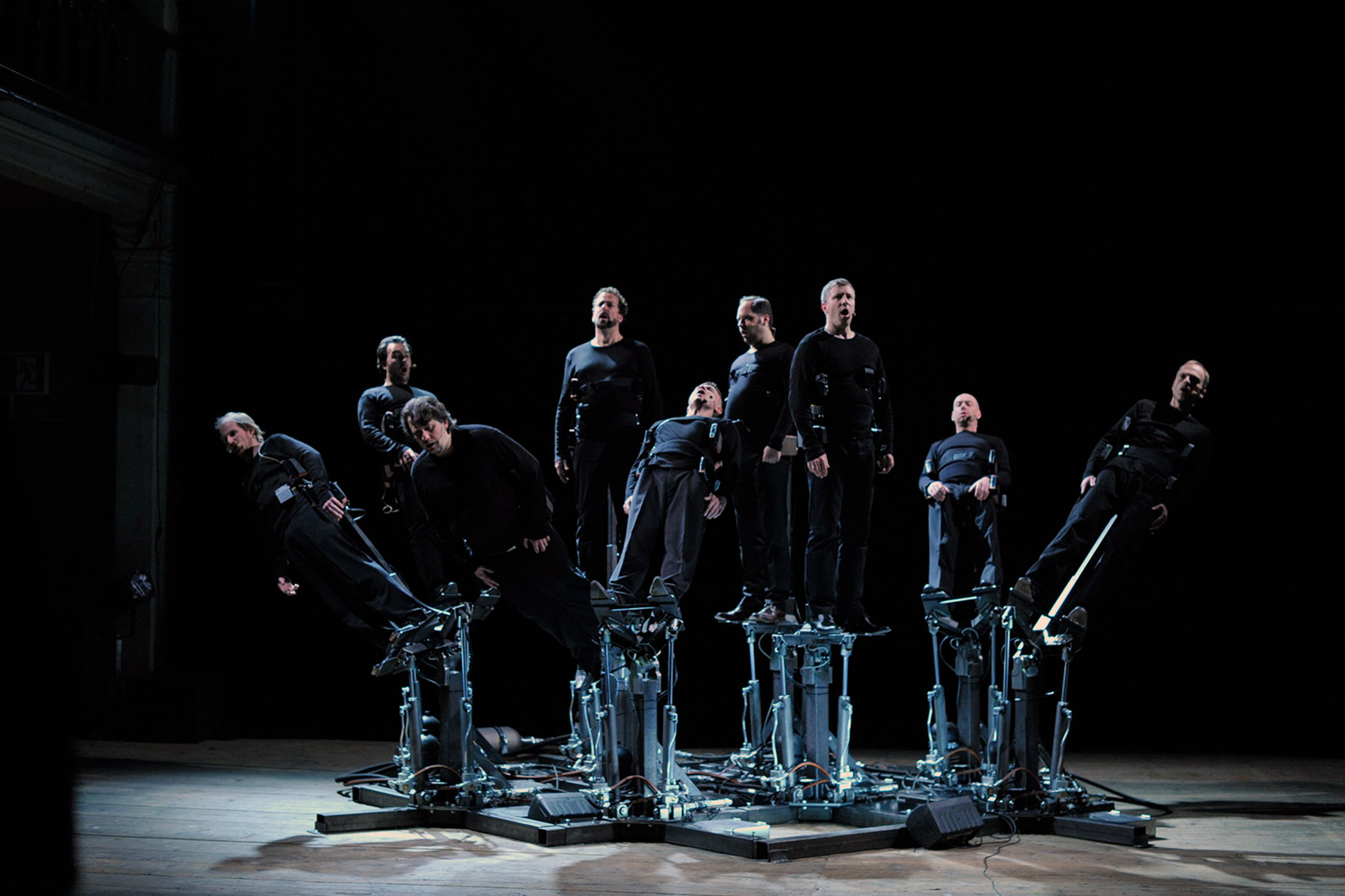 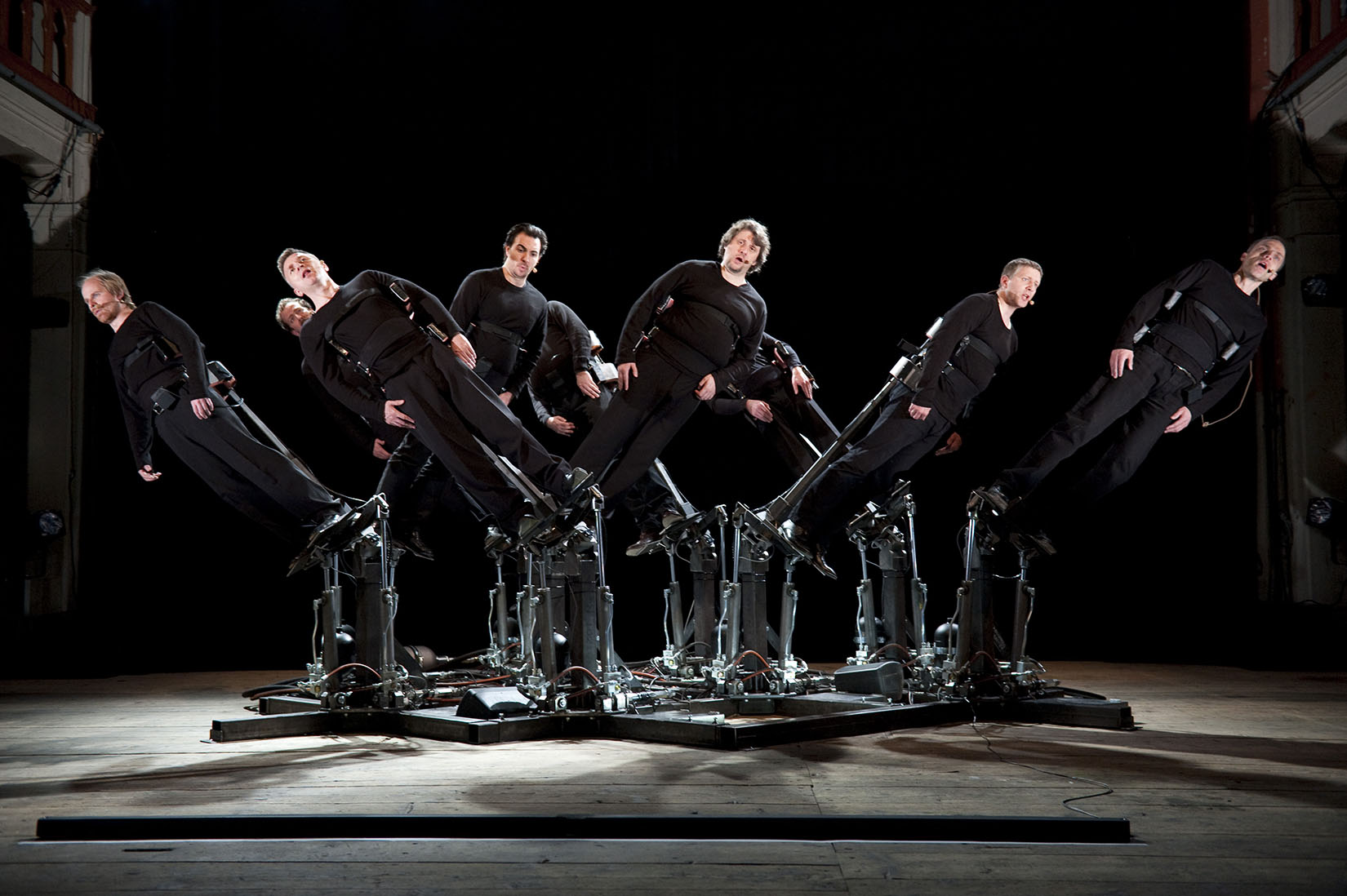 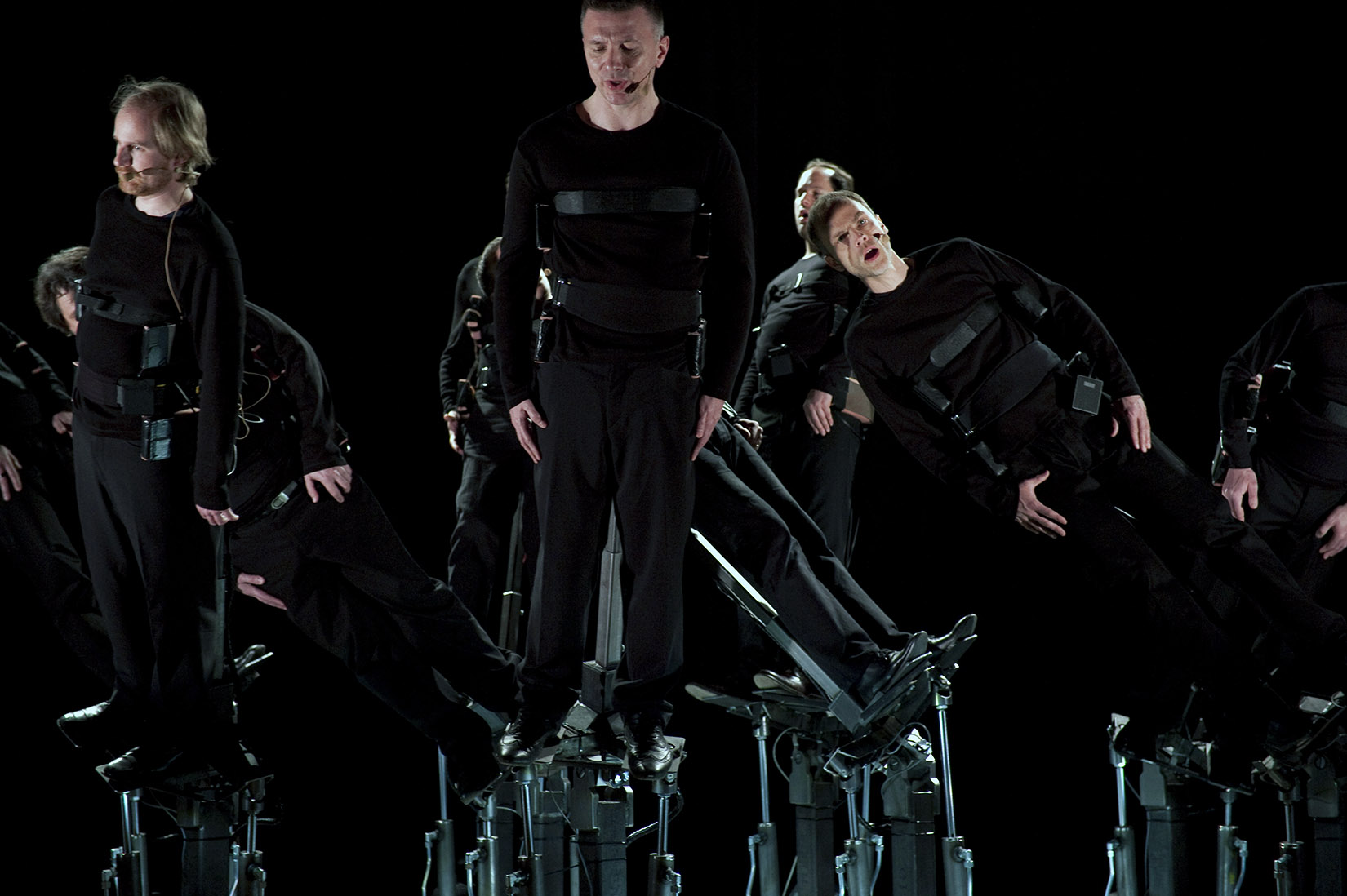 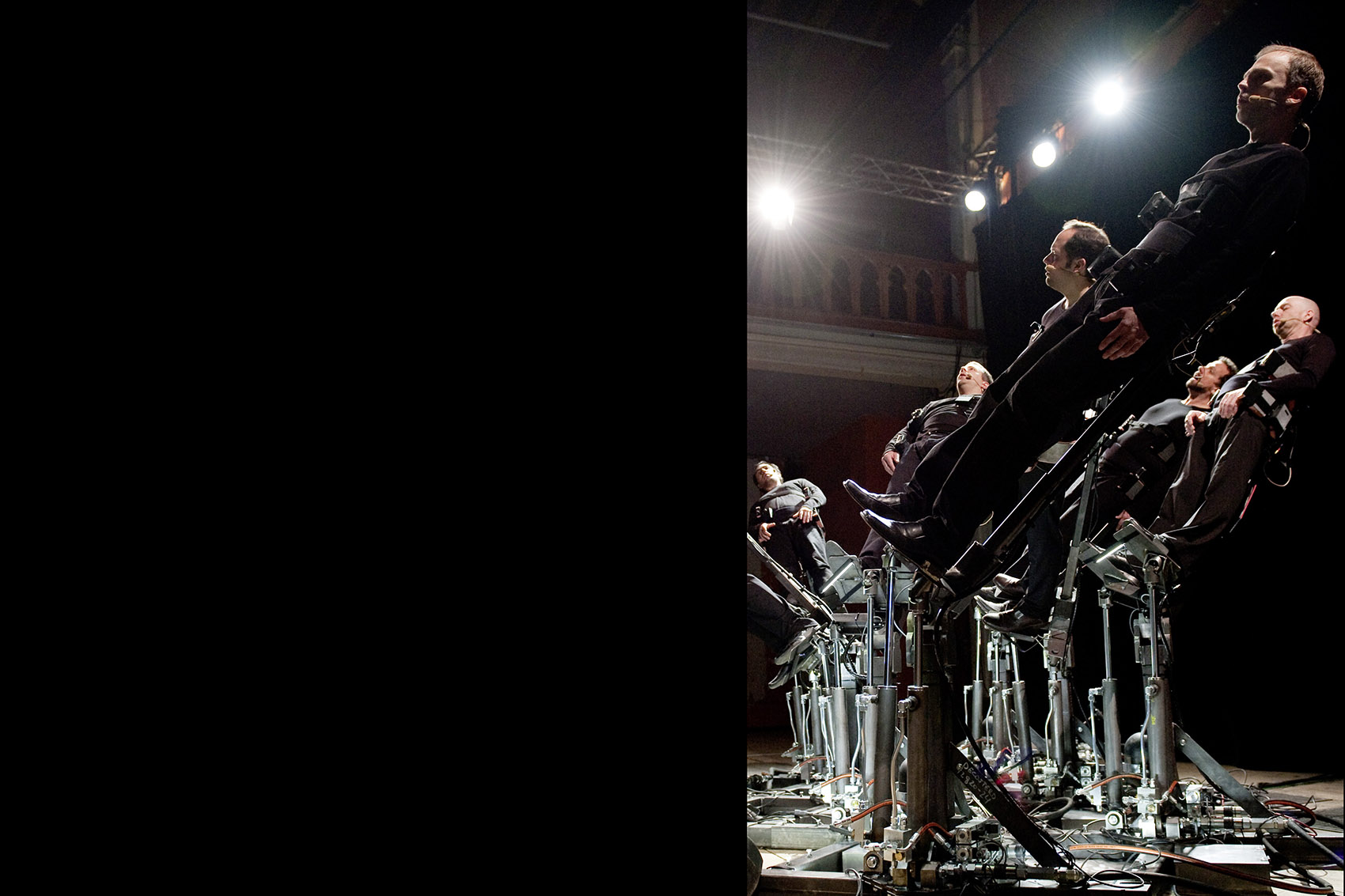 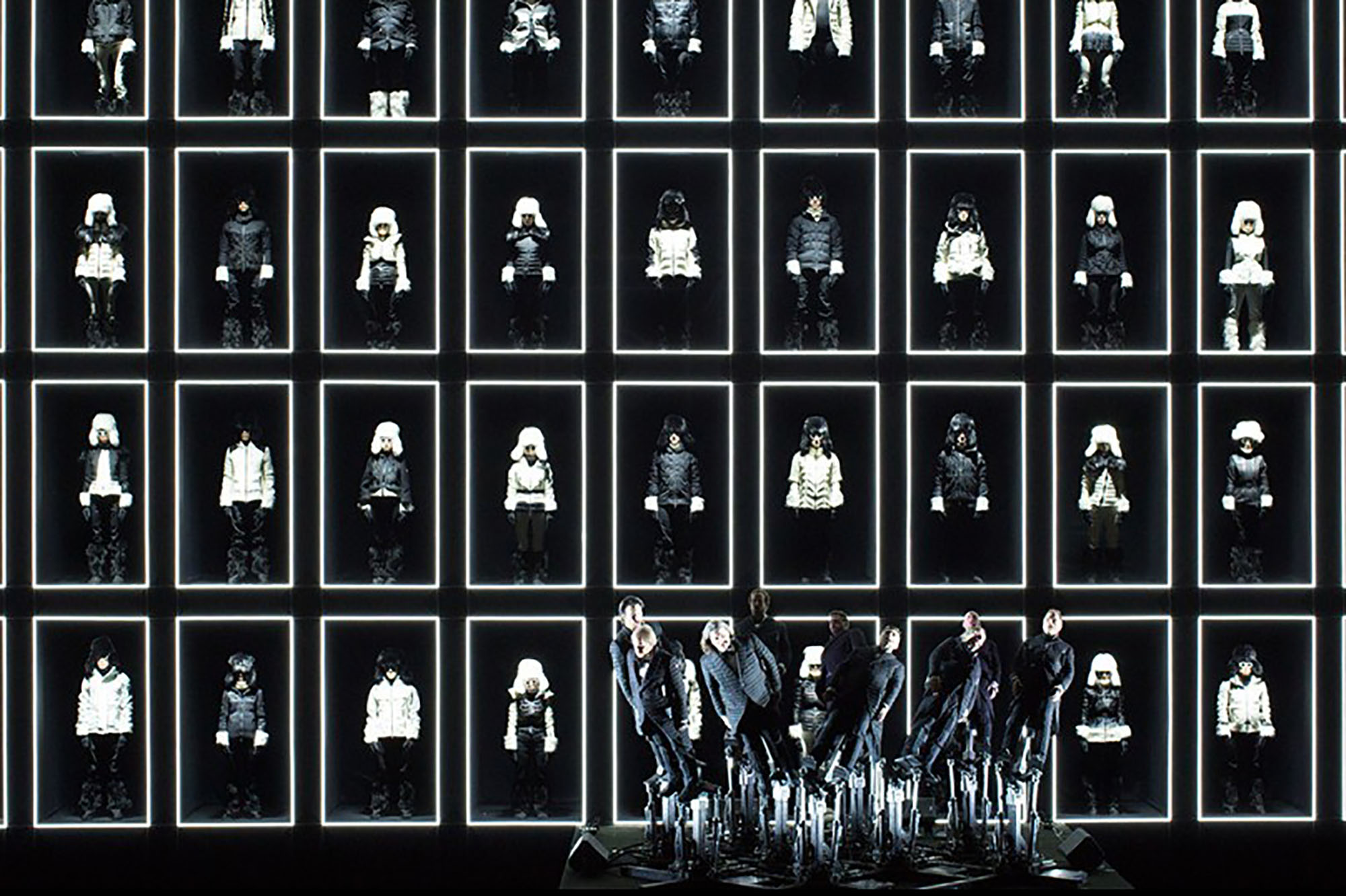 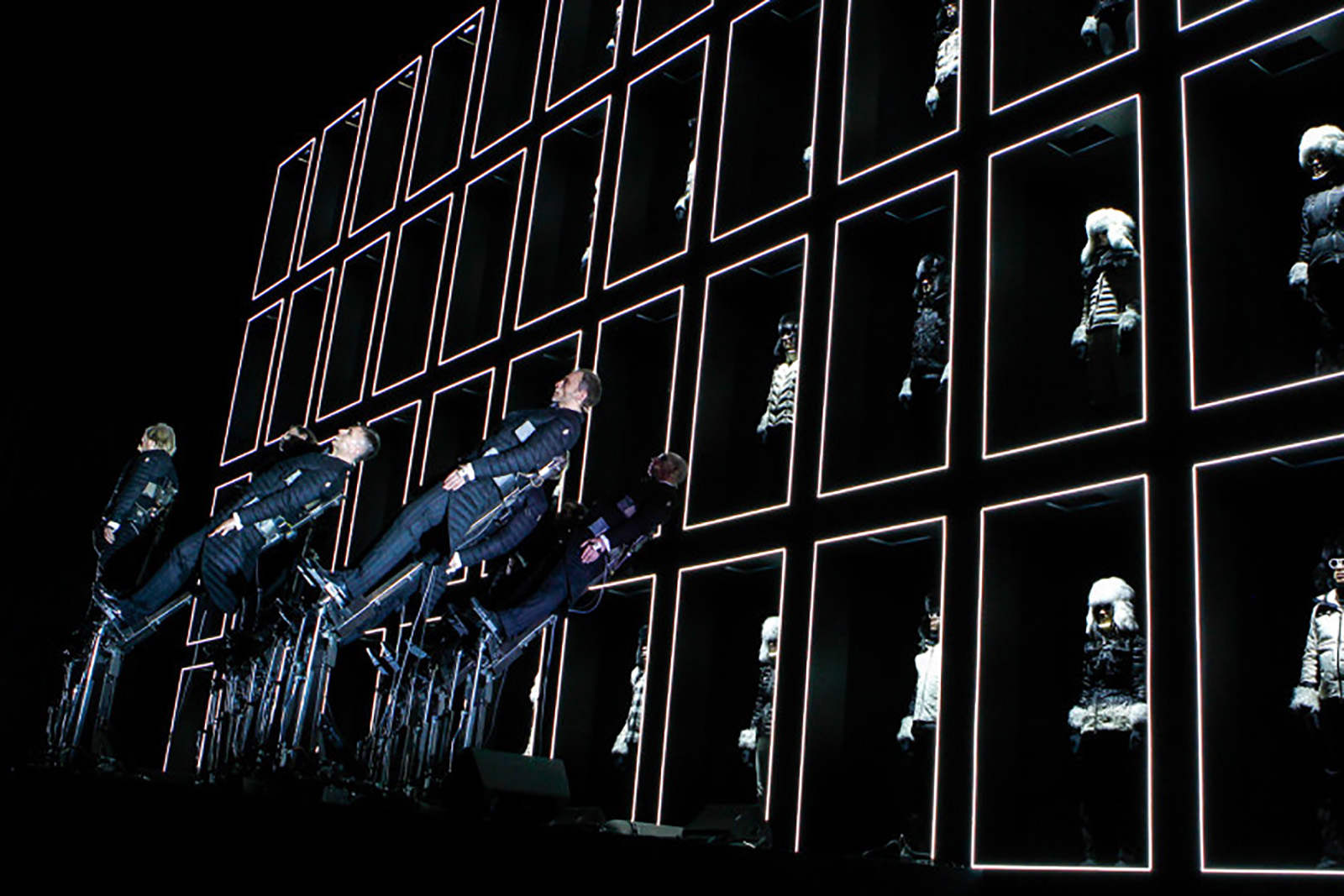 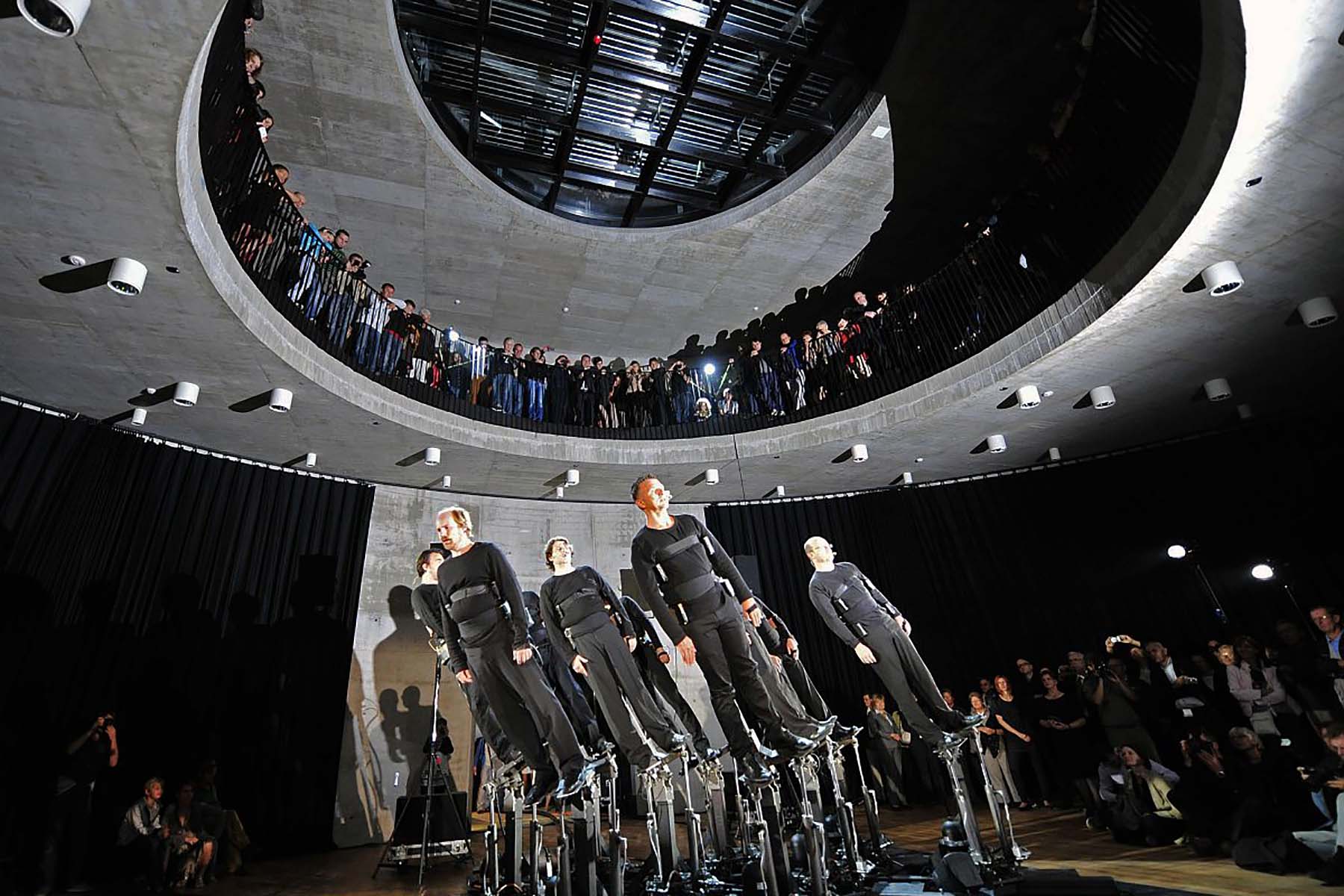 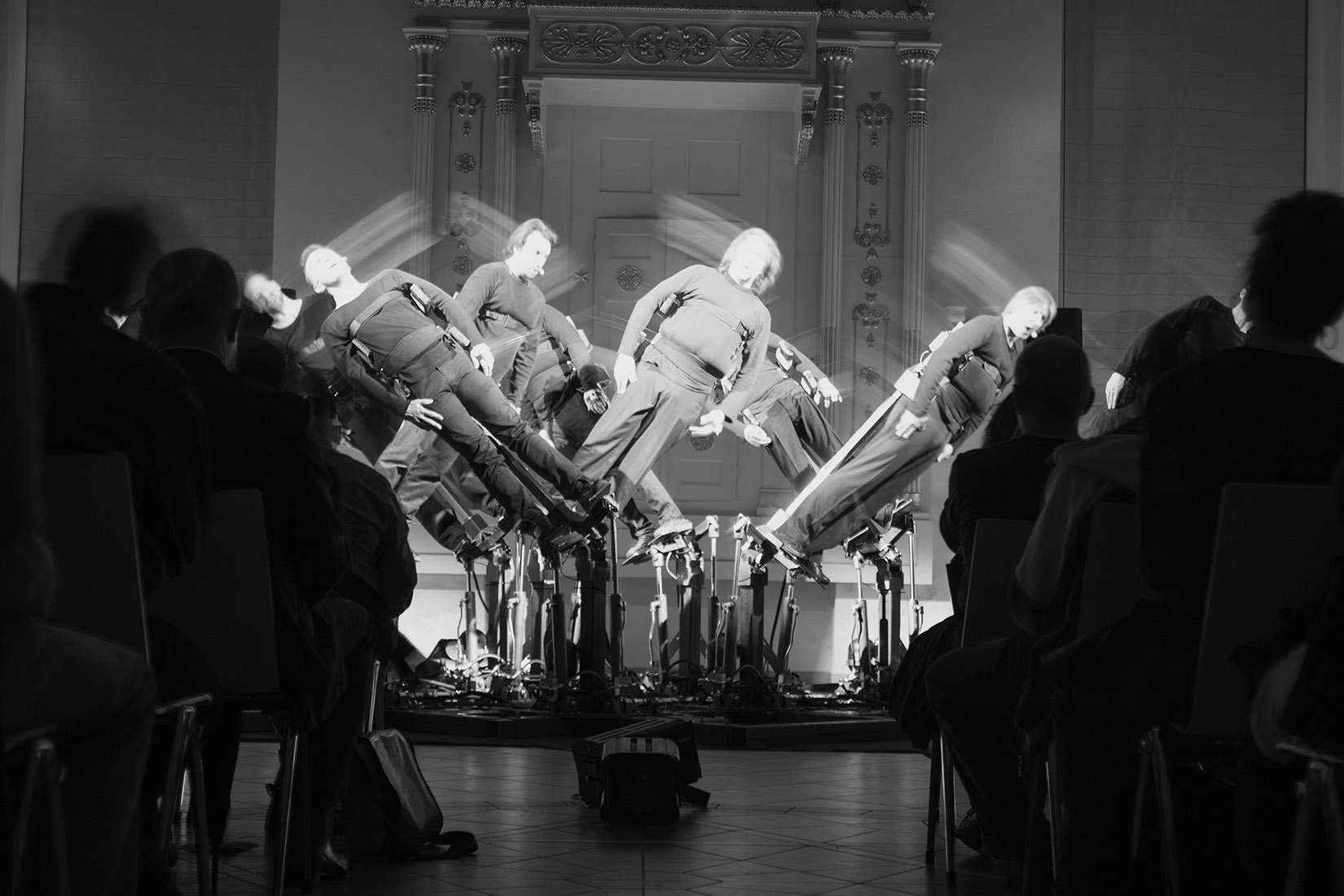 Pendulum Choir is an original choral piece for 9 A Cappella voices and 18 hydraulic jacks. The choir stands on tilting platforms, constituting a living, sonorous body. That body expresses itself through various physical states. Its plasticity varies at the mercy of its sonority. It varies between abstract sounds, repetitive sounds, and lyrical or narrative sounds. The bodies of the singers and their voices play with and against gravity. They brush and avoid each other creating subtle vocal polyphonies. Or, supported by electronic sounds, they break their cohesion and burst into lyrical flight or fold up into an obsessional and dark ritual. The organ travels from life to death in a robotic allegory where the technological complexity and the lyricism of the moving bodies combine into a work with Promethean accents.

In 2006, we created ex pharao, a rewriting of the opera Moses und Aaron of the composer Arnold Schönberg. It was rewritten in the form of a new orchestral piece in which visitors can modify the sound and dramaturgic parameters in real time. These modifications are operated by means of a mechanical installation. The visitor is at the same time orchestra conductor and one of the actors of the opera. With Pendulum Choir, we continue our researches on the possible relations and interactions between orchestral music and movement. In this new production, we concentrate on an A Cappella work.

Within the continuum of our researches, the idea of creating a moving choir came from our intention to instigate a relation between movement and sound that was as close fitting and natural as possible. In Pendulum Choir, the mechanical set up engenders physical constraints on the singers and, as a consequence, on their way of singing. This creates new and unexpected sonorities, a plastic parameter that we decided to incorporate in the musical writing. Similarly, we sought to include phenomena due to gravity, gravity forces, and acceleration forces on the singers. These phenomena are well known in mechanics but still foreign to musical compositions.

The concept of a mass of sonorous and moving human bodies, going through a natural distortion under the effect of physical forces brings to mind a living organ. It evokes a muscle or a living organism emitting sounds in relation to its distortions. In order to write plastic and musical piece that has homogeneity, we used the representation of a lung. Each singer represents one of the lung’s alveoli. The flux of air going through the organ becomes sonorous, as sung by the singers. The theme of the musical piece is the breath. The link between the bodies of the singers is plastic, elastic. The movement of the choir constantly challenges the cohesion of the voices and their density.

The sound material of breath is basically abstract and repetitive, but it can also be considered as verbal and narrative. The choir blows and sings the breath. It travels from life to death, exhales, suffocates, looses its equilibrium while recounting its sensation of the last breath on its descent to hell. This musical part is based on poems from Virgil, Ovid and Horace. The movements support the narrative. The work evolves between abstraction and lyricism.

The « breath » is the theme of the music, the lyrics and the movements in Pendulum Choir. The first steps in the composition of the music started with researches on the origin of the breath, its different significations, and its references in the fields of sciences and culture. These researches were then used as a base for the dramaturgic and plastic construction of the work. This work consists of nine parts, each one expressing a specific notion of the breath. In the context of a choir in movement, musical writing is particularly challenging. It has to take into account new parameters such as the effect of the movements on the vocal capacities of the singers, the impossibility these singers have of looking at each other because of their positions, and the absence of a conductor during the performances. To make the relation between the singers and the machine as organic as possible, the voices A Cappella are “augmented” by a sound synthesis device. This device captures and analyses the voice of each singer by following the evolution of its frequency and its amplitude. On the one hand, the voices are gradually “dehumanized” so that their spectre agrees with the tones stemming from the machine, and on the other hand, synthetic sound materials are created by the device, that evolve in direct relation with the choral score.

The music was developed in several stages. The first one considers the choir as an organic entity, in other words, as a homogeneous vocal mass. The combination of the various densities produced by the vocal effects (the breath, the whisper, the talked, the sung, the shouted) gives substance to the music. The tones of the music organize themselves from harmonious rigor to free expression. The second stage dealt with the shaping of the vocal mass according to the theme and the expressiveness sought every piece. The vocal ensemble is uniform or divided into interdependent or independent sound groups. Occasionally, it is also decorated with soloistics parts.

Among the nine pieces of Pendulum Choir, there are three rites. Among these, “Exsufflare” (exhale the demon) and “Specessandi” (to hope to breathe) refer to ancient myths and legends. Their construction and their development articulate themselves around the notions of cycle, repetitions and obsession. The succession of their rhythmic and melodic sequences as well as their progressive densification aim at a state of trance. The electronics is very present. It “cools” the voices by superimposing on them pure and straight sounds, or it “cracks” the vocal tones in relation to the movements of the choir.

The words are a plastic language, consisting essentially of sequences of concatenated syllables and of phonetic fragments chosen for their sound characteristics and their expressive impact. “Suffocando lymphatico metu” (choking with panic), the third ritual, is a piece in two parts, which refers to the last breath, to death. It consists of an assemblage of Latin texts of Virgil, Horace and Ovid on death and on the descent to hell. The music articulates itself around two soloists. In the first part, the choir builds a subtle play of echoes and resonances based on the musical phrases of the soloist. In the second part, the principle is inverted. The choir precedes the soloist by creating big chords with incisive attacks, which are release on heights common to all the singers. These notes are then prolonged and continued in complex musical phrases by the soloist.

The electronic device actively supports the dark harmony of this descent into hell. “The breath of ecstasy” expresses, in two parts, the breath of ecstasy. The construction of the music is based on a symmetric system. Melodies evolve in a looping harmonious structure, with no beginning and no end, and in which each constituents has the same quality. The last piece describes the conflict between freedom from care and turmoil. This conflict expresses itself by the opposition of two Latin notions “Lenniter Inspirado” (breathing lightly) and “anhelando” (breathing with difficulty). The musical texture organized itself, dilates, jumbles and retracts according to the movements of the choir.

The movements and the machine

The machine allows the singers to be tilted in a linear or circular way in all directions up to an angle of 45 °. To give the impression of a homogeneous body, the singers are placed very close to one another. Like their voices, their movements interact with those of their neighbours as if they were interconnected by a kind of elastic material or by cohesive magnetic strengths. The definition of the movements refers to the narration and to the dramaturgy of the piece but also depicts the deformation characteristics of an organic body. When a soloist manifests himself loudly standing out of the mass, his movement gives the impression of overcoming the strengths of cohesion, spreading the tissues and dilating the material.

The machine is operated in real time from the control booth by short pre-programmed sequences acting on all the platforms. The sequences are manually sent according to the progress of the musical score and to the progress of the piece. Since the choir is not conducted, this method of sequential control guarantees synchronization of the voices and of the movements. Since the singers move very close to each other, a short divergence of the trajectory can cause a collision. The programming of the sequences takes this into account. A voluminous hydraulic pump placed as far as possible from the choir generates the mechanical power. Two jacks on each platform then relay it. Since the lever arms needed to tilt the singers are very short, the strength developed by the two jacks is very important. They can reach several hundreds kilos. The choice of a hydraulic system was essential for such a project because it allows to have the source of power far removed from the machine and to reduce the noise emanating from the pump. The platforms composing the machine are powerful, fast and silent which reinforces the morphological homogeneity of the choir and the machine.