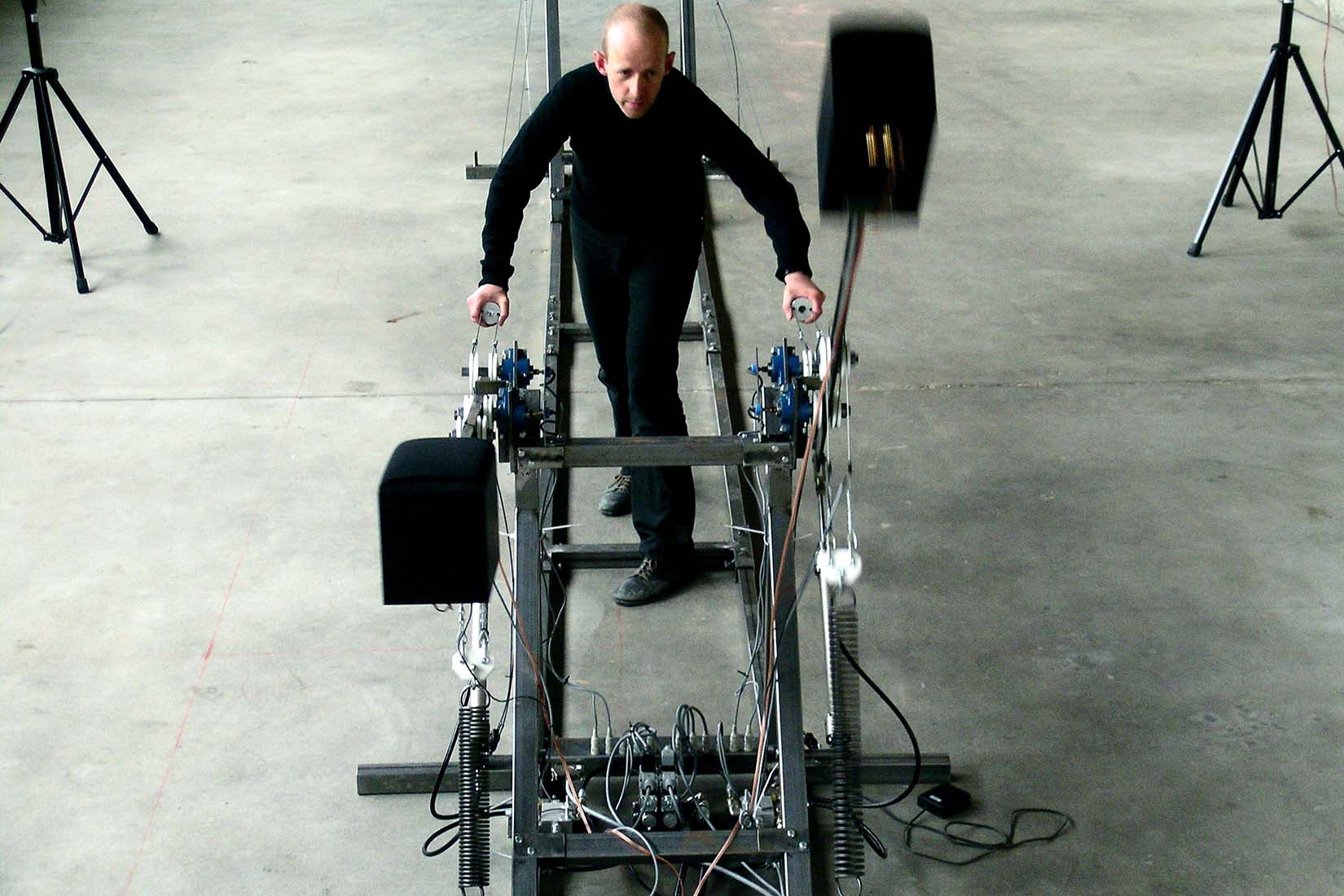 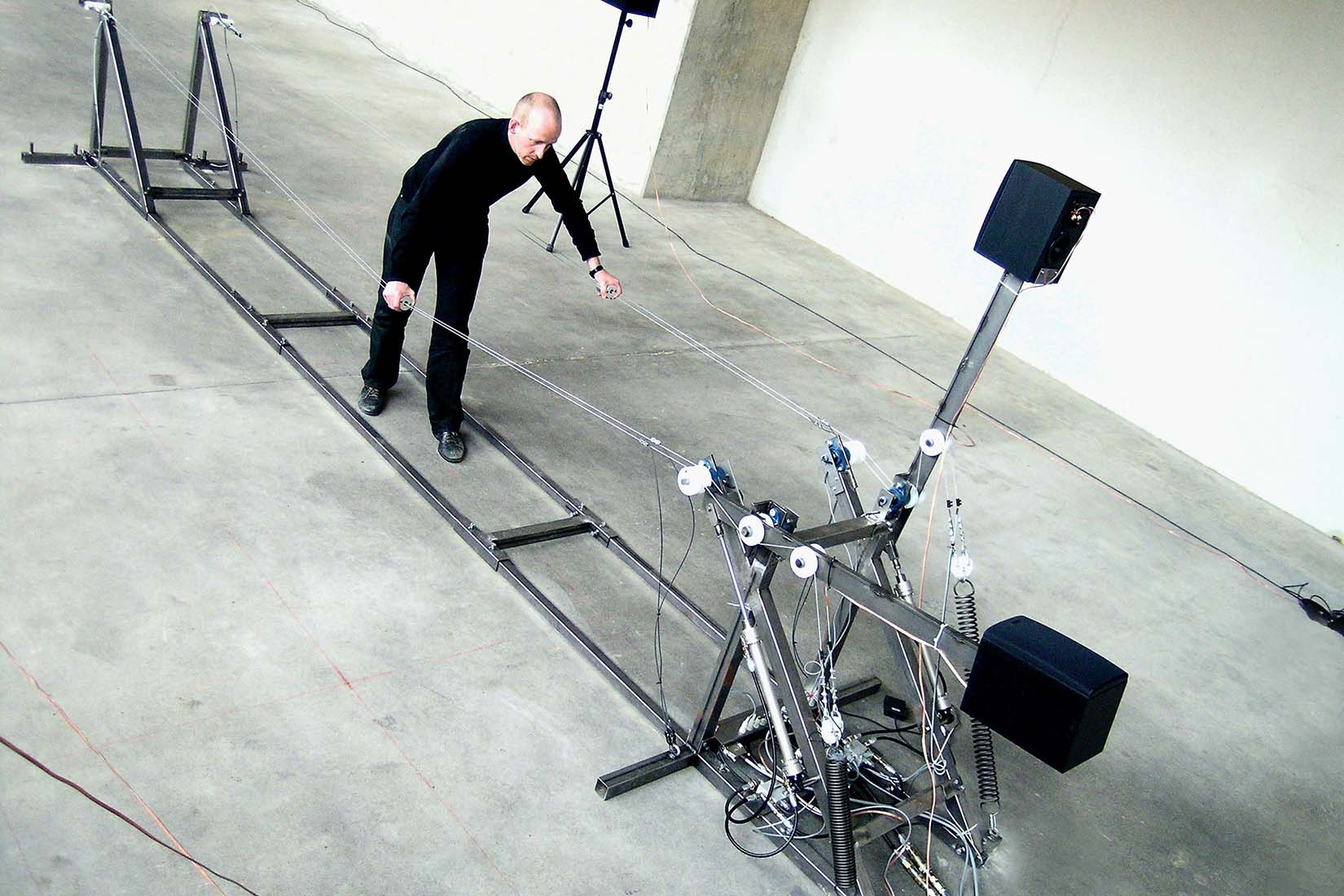 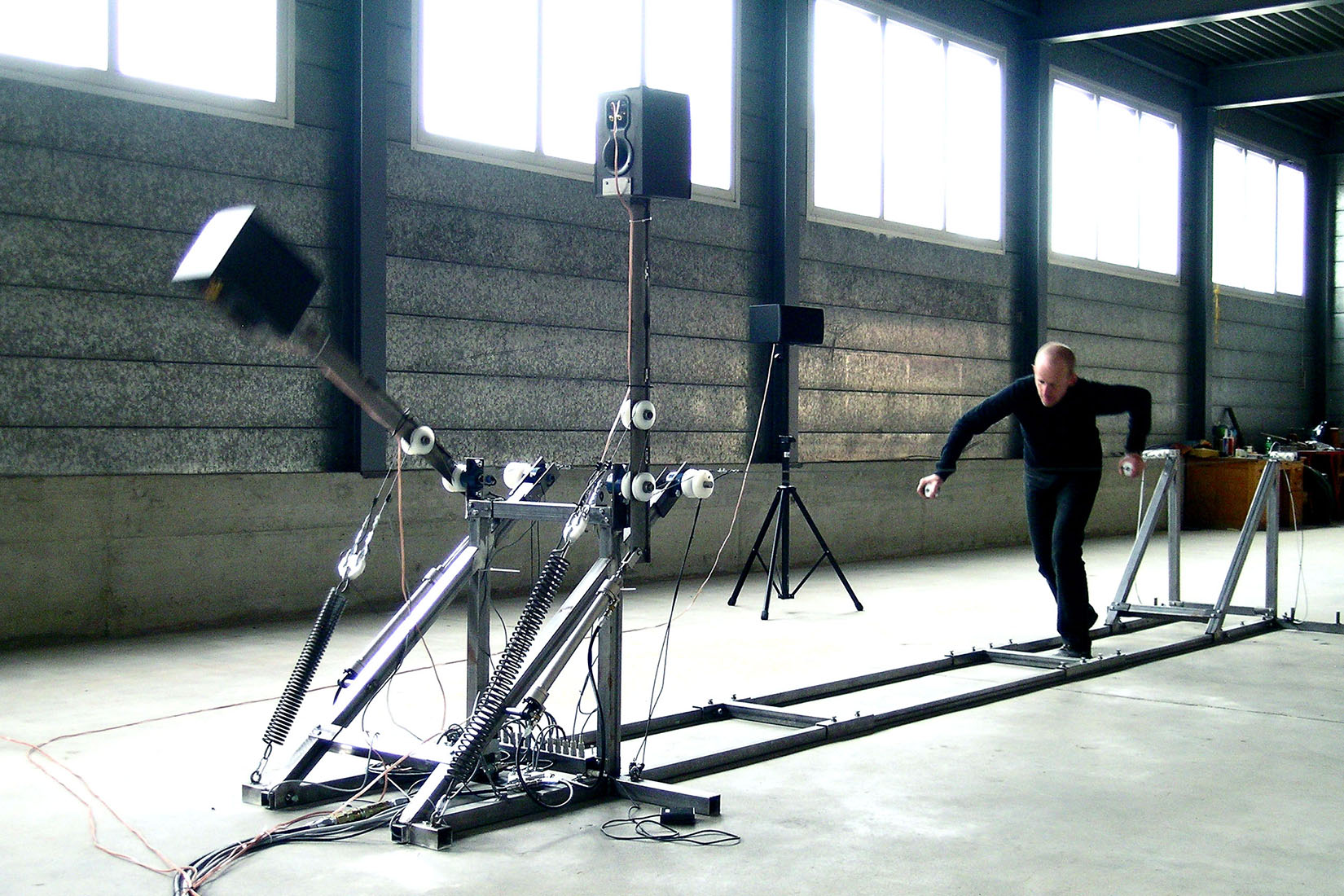 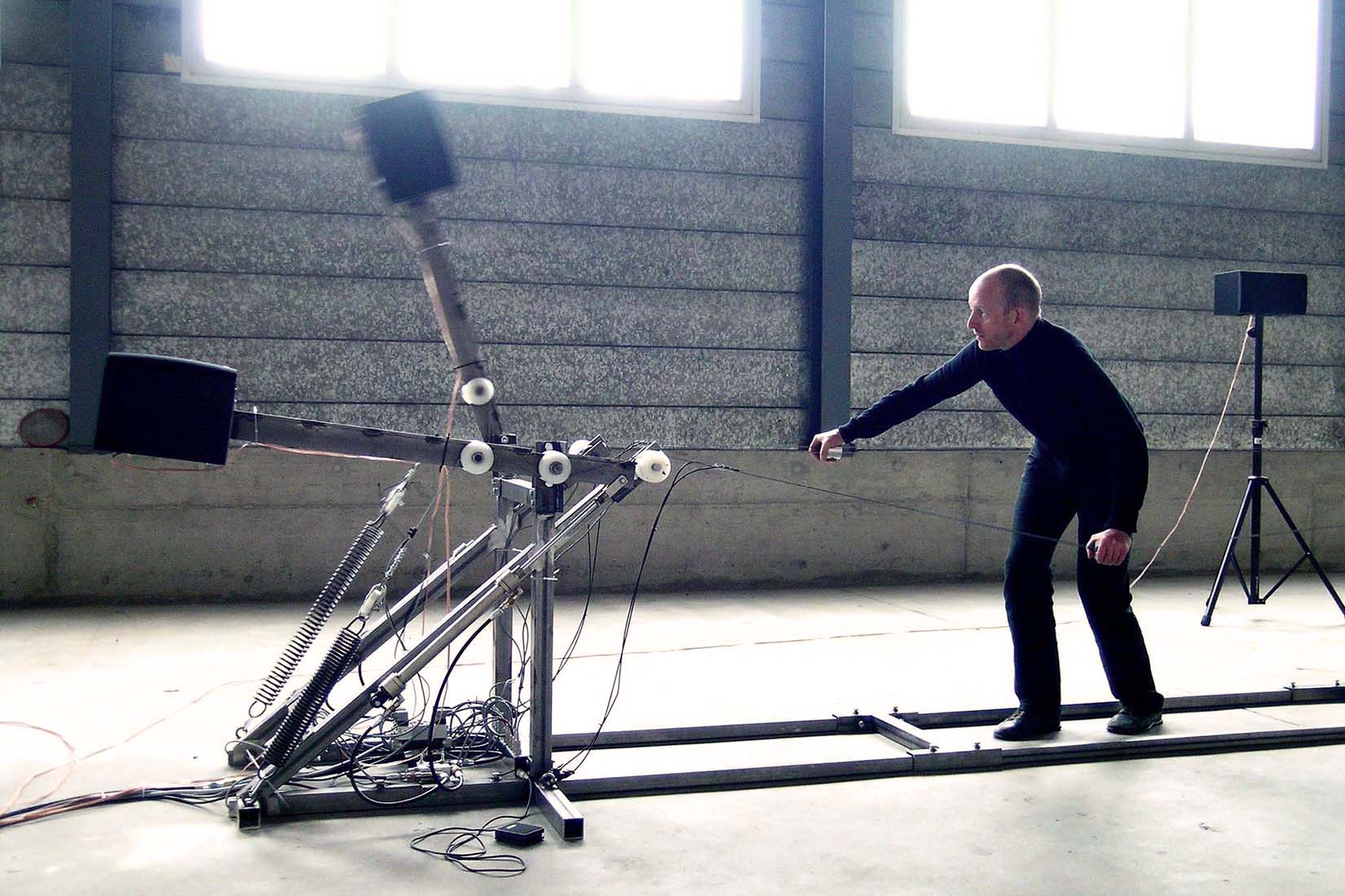 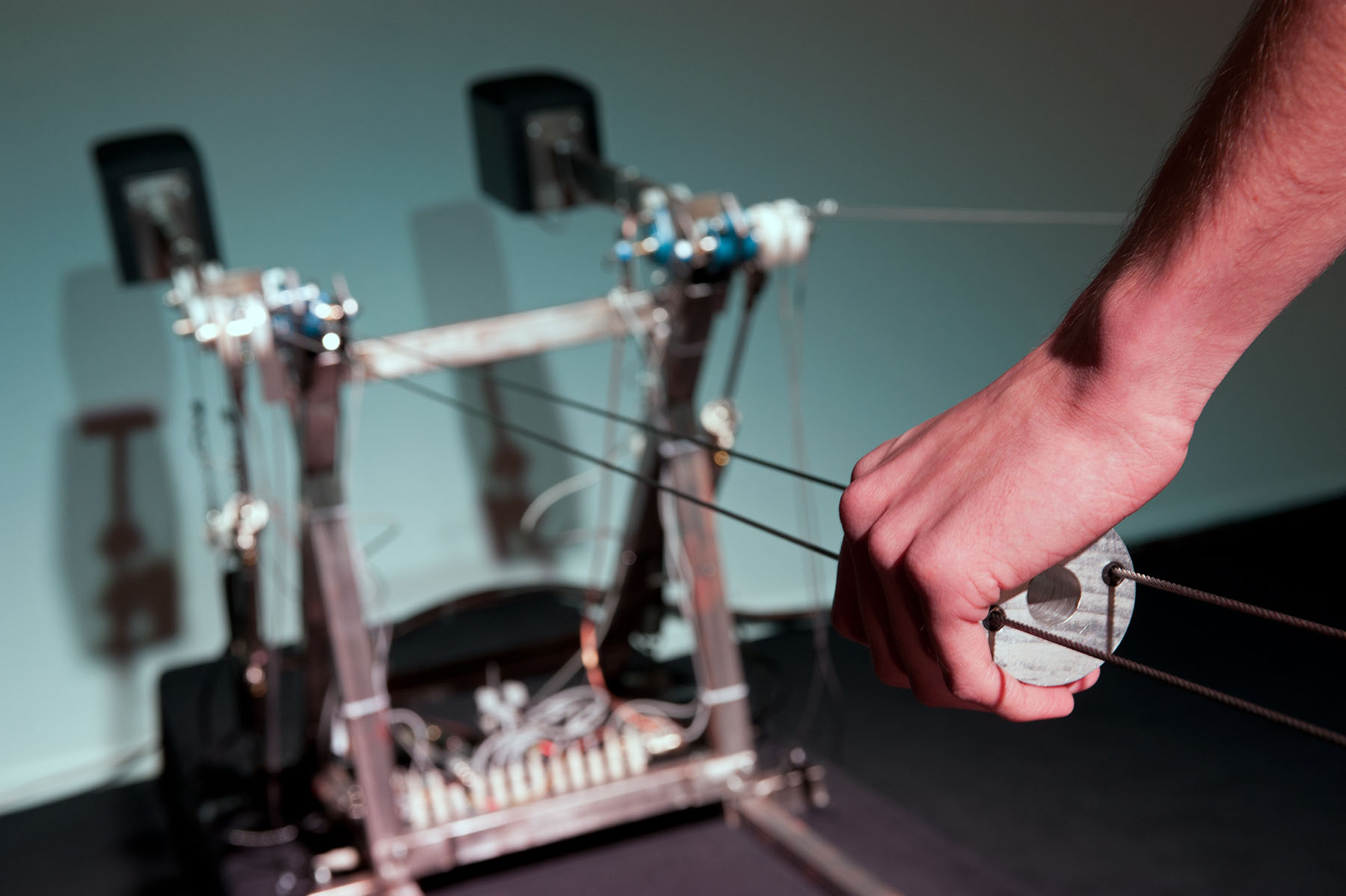 Cod.Act proposes a rewriting of the opera Moses und Aron by Arnold Schoenberg in the shape of a new orchestral work in which the lyrical and dramaturgical parameters can be modified in real time through a mechanical apparatus composed of cables and hydraulic levers. When manipulating the device, the visitor becomes both conductor and actor.

Entirely based on a dodecaphonic system, Arnold Schönberg’s opera is a magnificent equilibrium between the rigors of the serial system, the dialectics of the singing and “Sprechgesang” and the subtle vocal and orchestral polyphony. The structure in the discourse, the religious reflections and the orchestration are associated to perfection into a true lyrical and musical masterpiece. Moses receives divine orders to convert the Israeli people to the “sole God, eternal, omnipresent, invisible and inconceivable”. But Moses finds himself incapable of communicating this concept. To convince the people of Israel he needs the charisma of his brother Aaron. Alas, Aaron will betray their shared faith. On Mount Horeb, where Moses receives the 10 commandments Aaron will offer to the rebellious crowd the Golden Calf. Moses is broken.

The narrative structure of the opera hinges around a confrontation between the two prophets and the people of Israel and then between the two prophets themselves. Each defends its position, resulting in an intense face to face, with alternating doubts, disappointments, fascination and resignation, which are interpreted by a musical dramaturgy of extraordinary wealth. However, the skilful complexity of the score and the abstraction of the narrative distract from the human dimension of the debate, from the characters and their fight to convey their faith. The scepticism of the people of Israel, mixed with the fascination that Aaron’s charisma exerts around him, Moses’ weariness and tearing, the collective hysteria towards the return of the Idols are the agonising elements of a collective drama that is not always perceived as it should be. Listening to various interpretations, in particular to the one by Georg Solti who by his impetus and colour has given to this work a real dramaturgical force, an opportunity became apparent to us that we decided to take further: visualise the opera as an installation, offer to the visitor a multisensory and physical relation with Schönberg’s work, giving him at the same time the role of actor and conductor.

Moses und Aron is a masterpiece of such perfection that it was unthinkable of adapting it to an interactive system. We therefore rewrote the score under the shape of a new orchestral work and only borrowed its structure (its unfolding and the content of the scenes) and the rejoinders of the two prophets. The creation of the work was done with a view to staying as close as possible to the original character of Schönberg’s work. We chose, in the manner of serialism, a rigorous writing system adapted to current computer tools for sound treatment and allowing, without loss in uniformity, a modification of the sound parameters in real time. The mechanical installation represents the physical context of Schönberg’s opera, the debate between the three protagonists. By manipulating the mechanism, the visitor, acting as the people of Israel, can move about and modify the intensity of the sound of the orchestra and the choir, as would the conductor of the opera, thereby answering the rejoinders of the prophets.

The installation consists in a corridor delimited by two parallel cables. The different scenes of the opera follow each other along this corridor. The extremities of the two cables command the rotation of two structures fitted each with a loudspeaker. They represent Moses and Aaron. By entering in the corridor, the visitor faces the two prophets. By pressing on the cables, he modifies various sound parameters and thus acts on the expressivity of the orchestra and the choir. The visitor progresses along the corridor, the voices of Moses and Aaron intrude, speaking through raised loudspeakers, the cables become taut, the visitor is cut short.

The musical score is composed of two distinct parts: The voices of the prophets: The voices of Moses and Aaron were sung by two soloists and recorded according to the original score. Their intervention is triggered by the cables, depending on the chronology of the work. The orchestral part: The musical material is composed of an enormous amount of micro-fragments of sounds. They are sorted in a sound matrix based on their character: timbre, play mode, average height and their duration varies between 50 and 300 milliseconds. The work is written on the basis of this material and built so as to give to the visitor the control of certain musical parameters. Depending on the position of the visitor and on the pressure exerted on the cables, the computer chooses a number of fragments in the matrix and combines them together to form phrases. At the same time, the computer gives them a sound shape by modifying their frequency, amplitude and slope of attack. The computer operates based on the degree of dramaturgy of the scene.