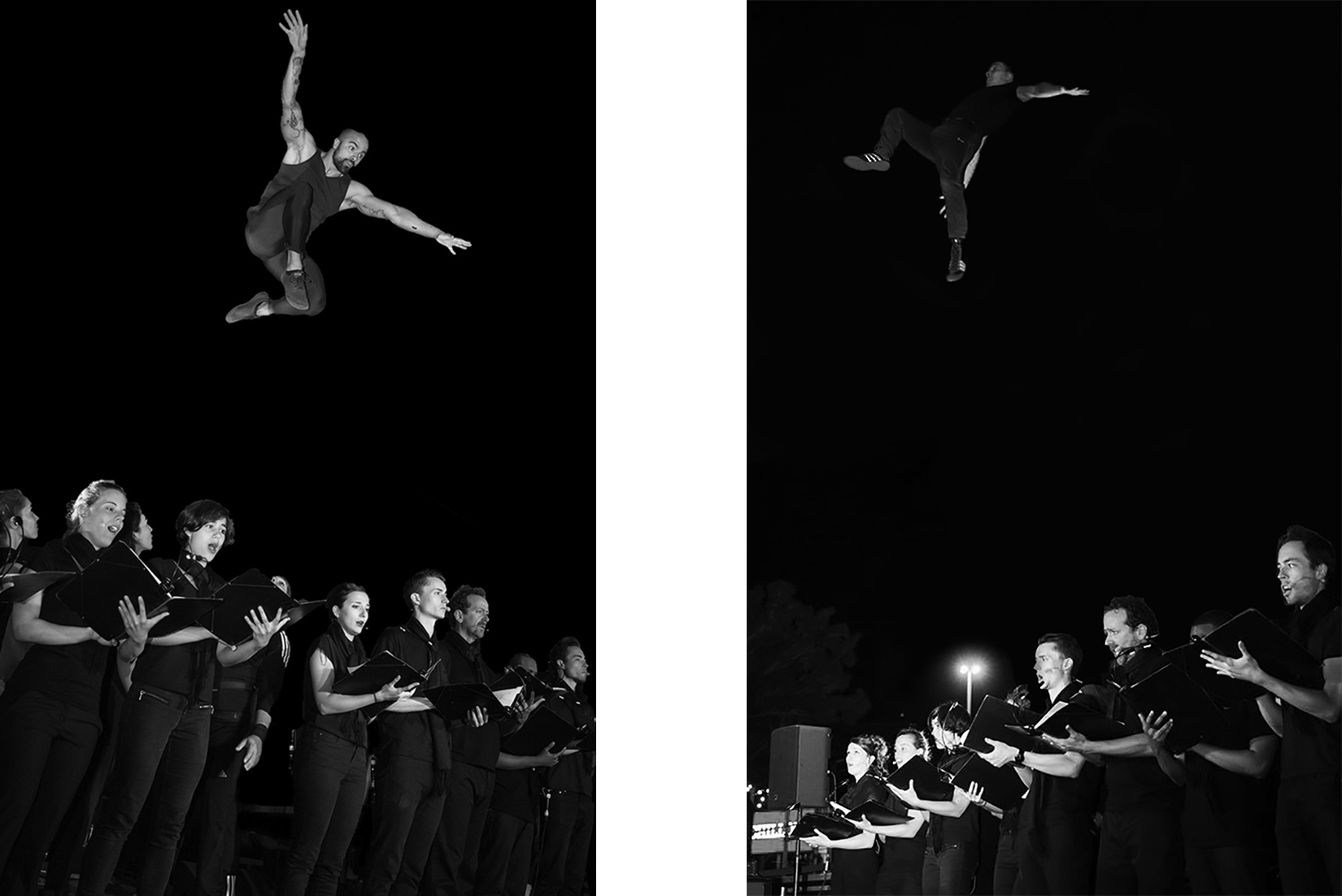 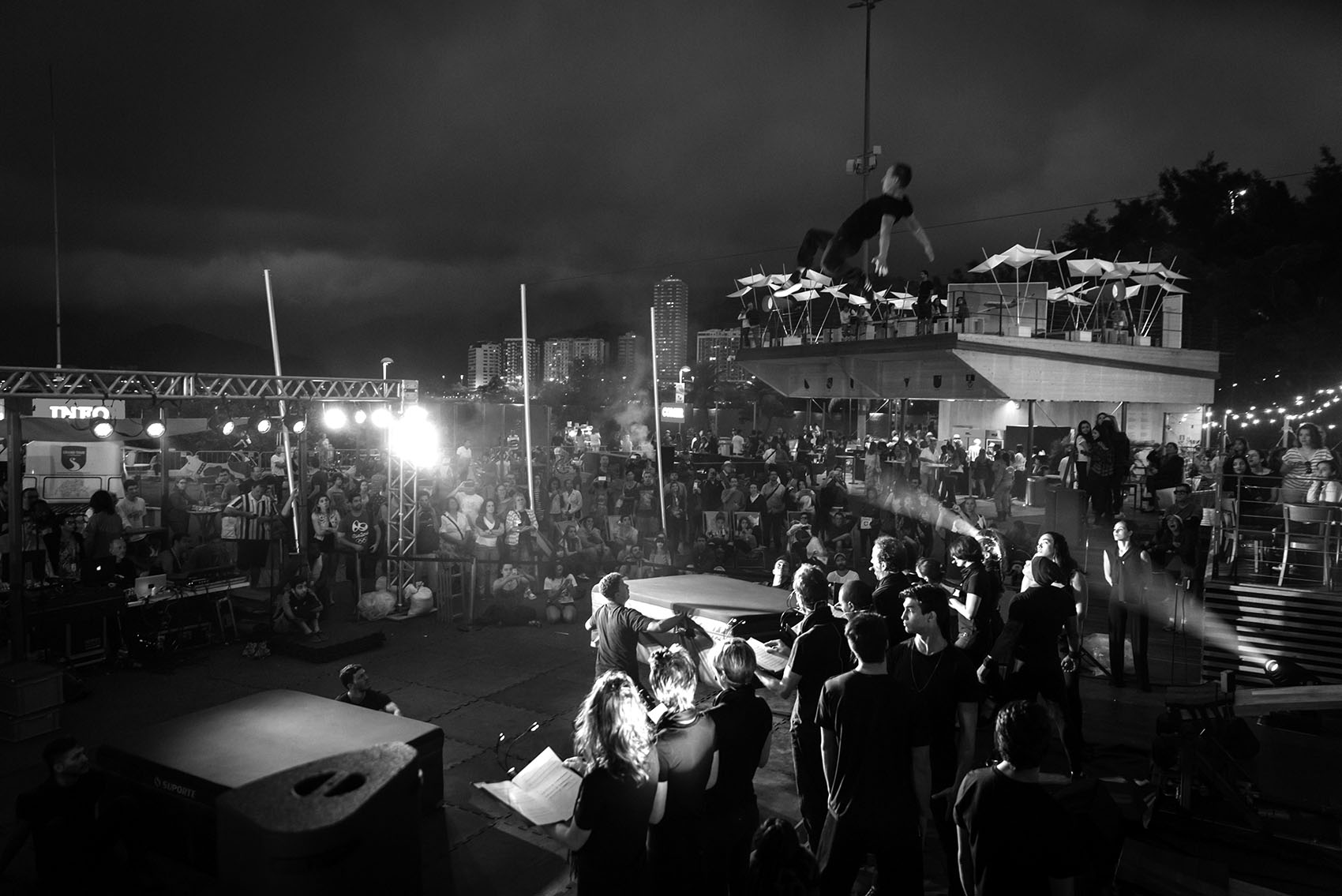 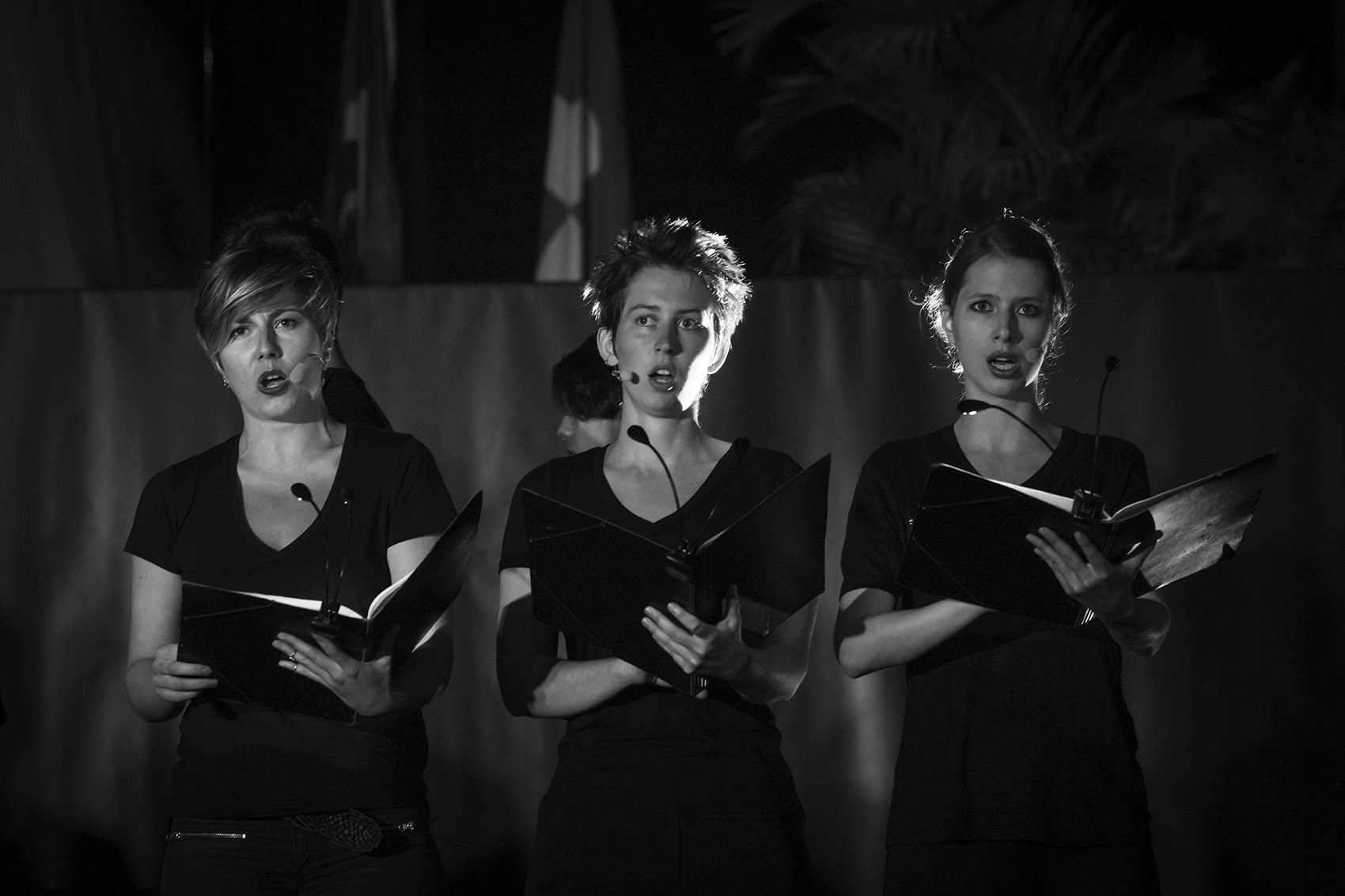 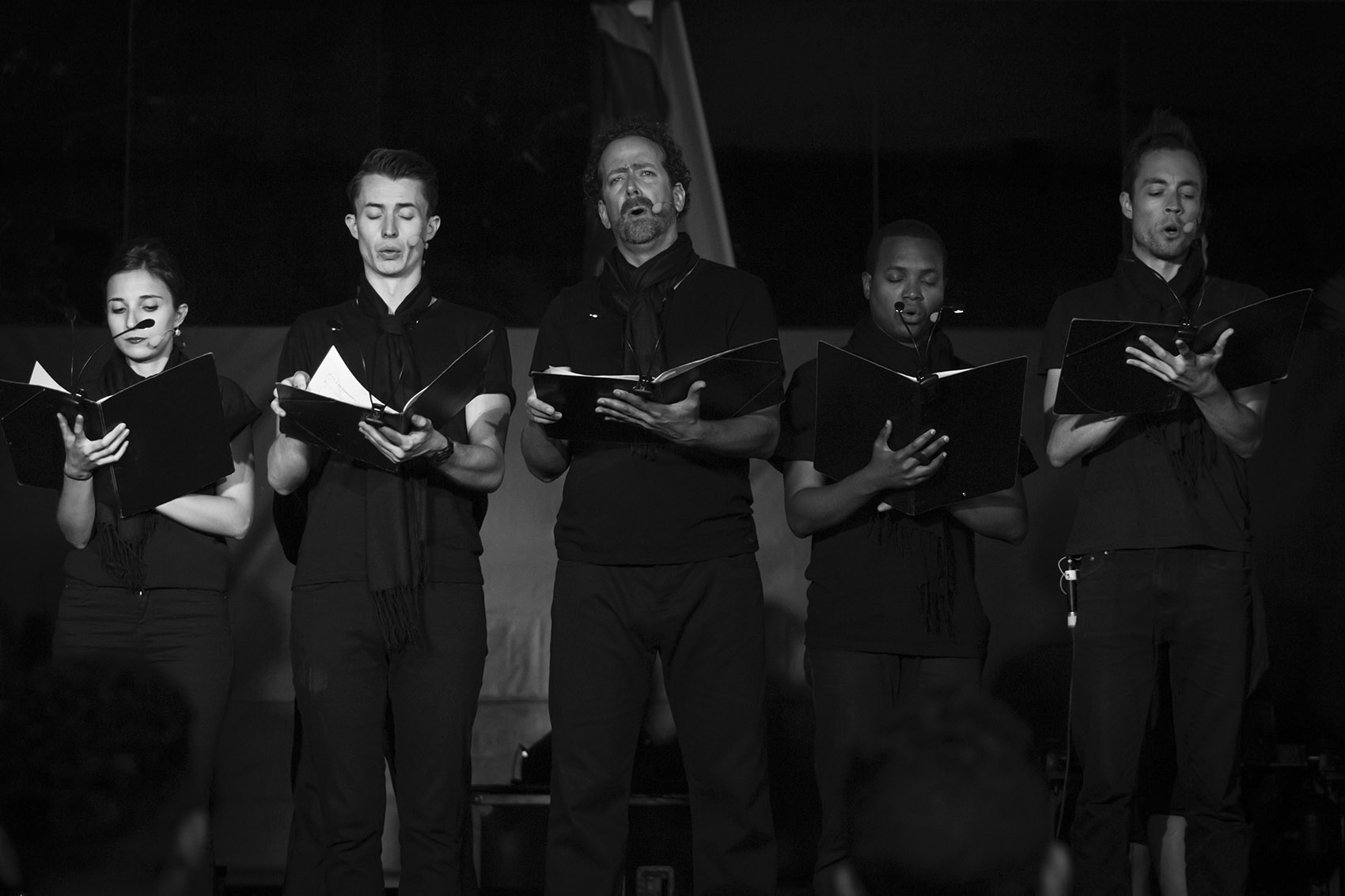 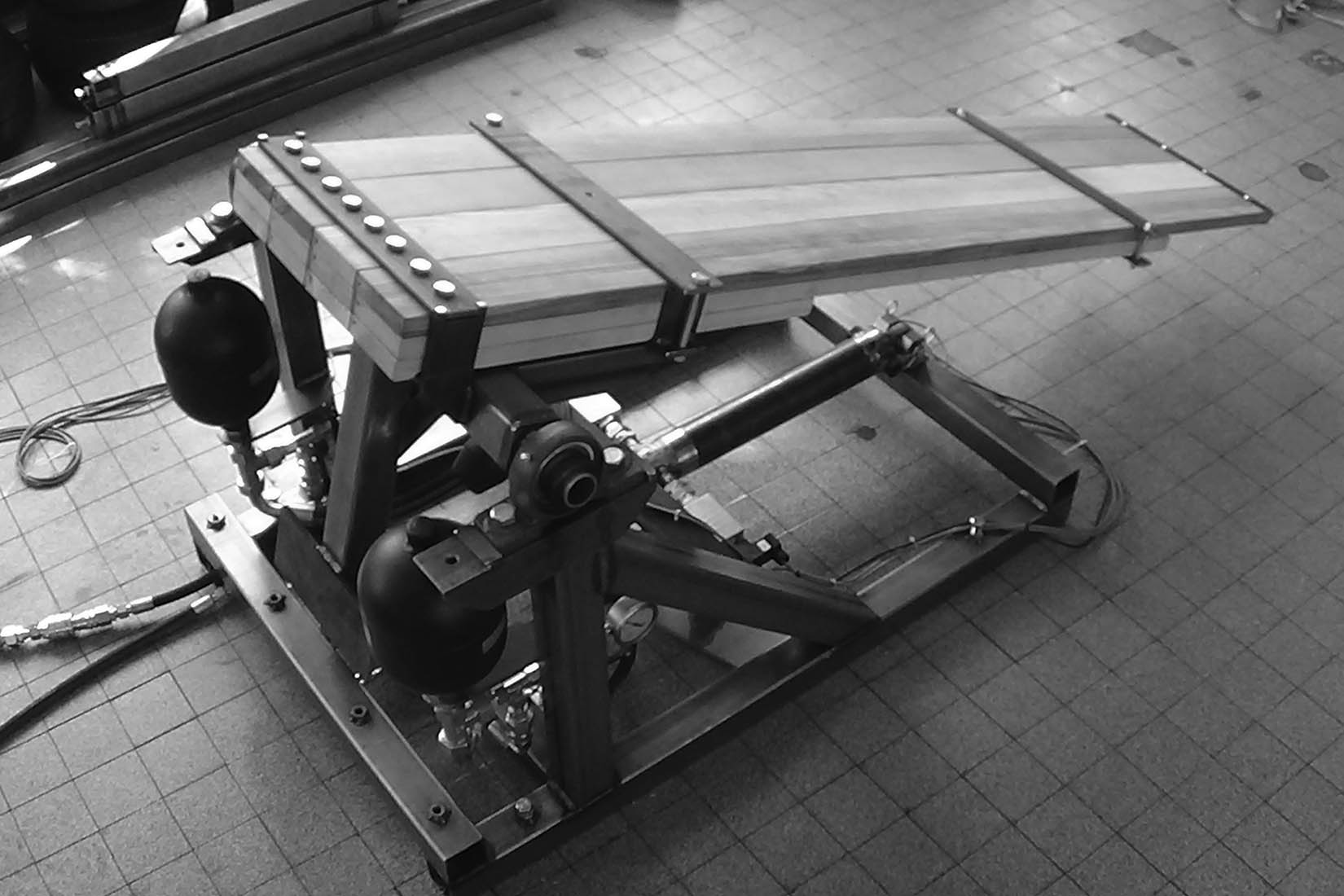 Baïkonour Choir is a performative experience with at its core, the possible connections between music and movement, a theme Cod.Act has been working on for many years.

What can be the reaction of a singer confronted with an event as unexpected and irrational as bodies in free fall crashing at its feet? How can his emotions, going from dread to annoyance, affect his voice, his singing and thus the musical and lyrical work?

Baïkonour Choir is a powerful sound and human sculpture with strangely Galilean accents.

The device consists of a choir of twelve singers and two hydraulic catapults. Hidden behind the choir, they propel two acrobats to be ejected more than seven meters high and land at the feet of singers.

The falls are the centerpiece of the work. They determine its progress, its musicality and its expressiveness. They are worked out with professional acrobats so that they appear as natural as possible. Once on the ground, the acrobats get up and leave, as if their fall was a completely normal thing.

The choir performs an original vocal work, iinspired by the scientific and philosophical poems of Lucretius questioning the destiny of man and the universe.

The music revolves around two strong elements, the narration, related by the singers and the falls that generate the electroacoustic material. These two elements maintain a relationship that progressively evolves during the performance. In a first phase, their relationship is conflictual. The first falls, unexpected, cause confusion in the choir and disrupt the narration. In a second phase, the appearance and the brutality of the falls does no longer upset the choir, it accommodates itself to it. There is a rapprochement of the two elements. In a final phase, the choir articulates its narration according to the electroacoustic interventions generated by the falls by integrating them into its musical discourse. The two elements are finally united in a common game, energetically projecting a living and physical musical material that subtly combines voice and electronics.

The performance is based on two strong elements: the musical interpretation performed by the choir, and the unpredictable falls of bodies that generate electro acoustical sounds. The relationship between these two strong elements will gradually evolve during the performance. In a first phase, their relationship is conflicting. The falls disturb the singers and create confusion. In a second phase, the falls don’t upset the choir any longer. The choir deals with them. In the third phase, the choir integrates the falls in the music. The music articulates itself around the falls.

A music editing system was specially designed for the work. It proposes a certain degree of indeterminism that allows and favors two notions that are essential to vocal interventions, reactivity and expressiveness. The electronic device has several functions. The first is to generate an electroacoustic material that combines with the music of the choir. Triggered by the impact of the falls, this material, at first concrete, accompanies them by recreating the choir’s sound. Then, as the performance progresses, it enriched itself and harmonizes itself to take an increasingly important place in the musical discourse. The second function of the electronic device is to capture the voices of the singers and treat them so that their timbres evolve progressively towards the electroacoustic sounds, and merge with them at the end of performance.