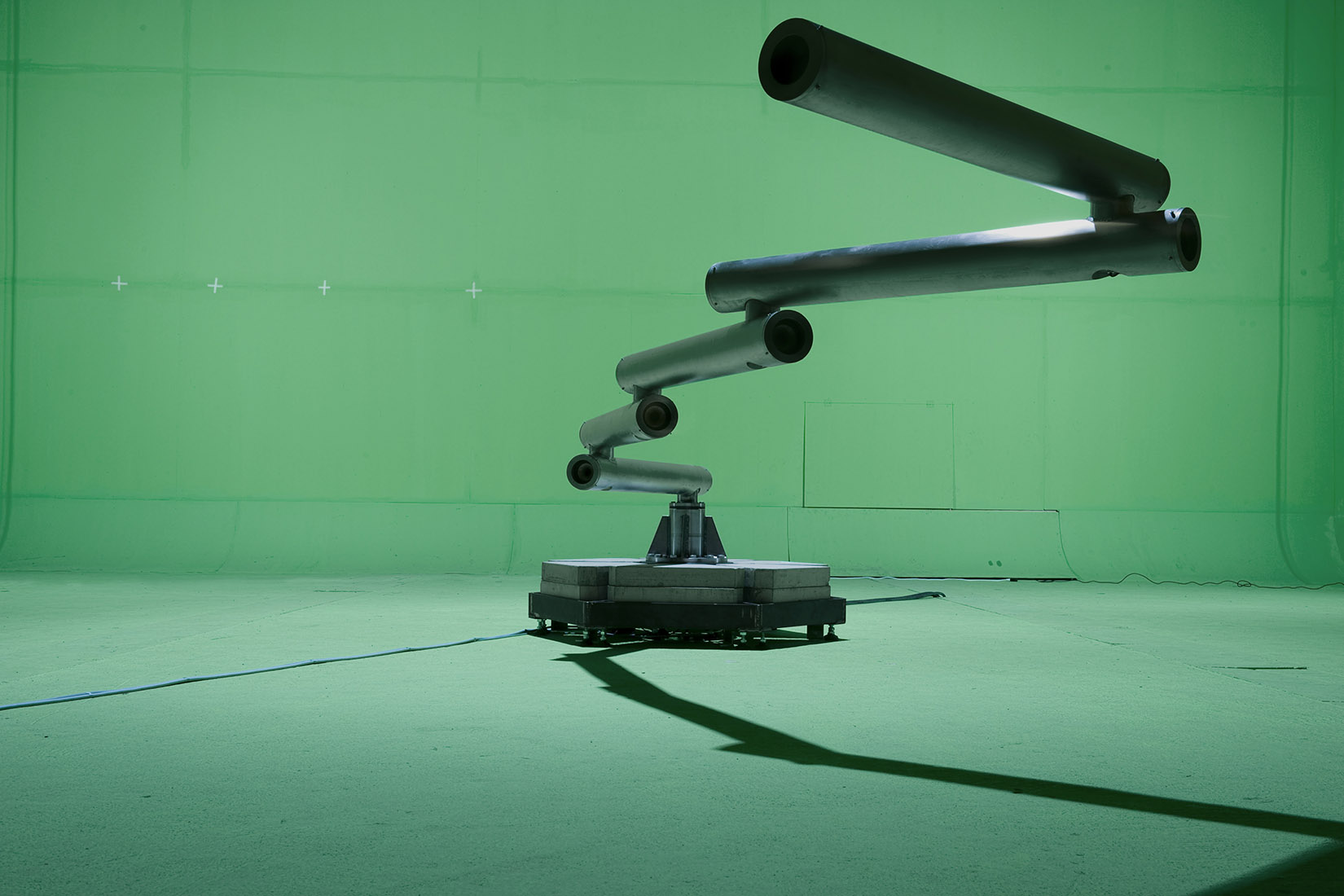 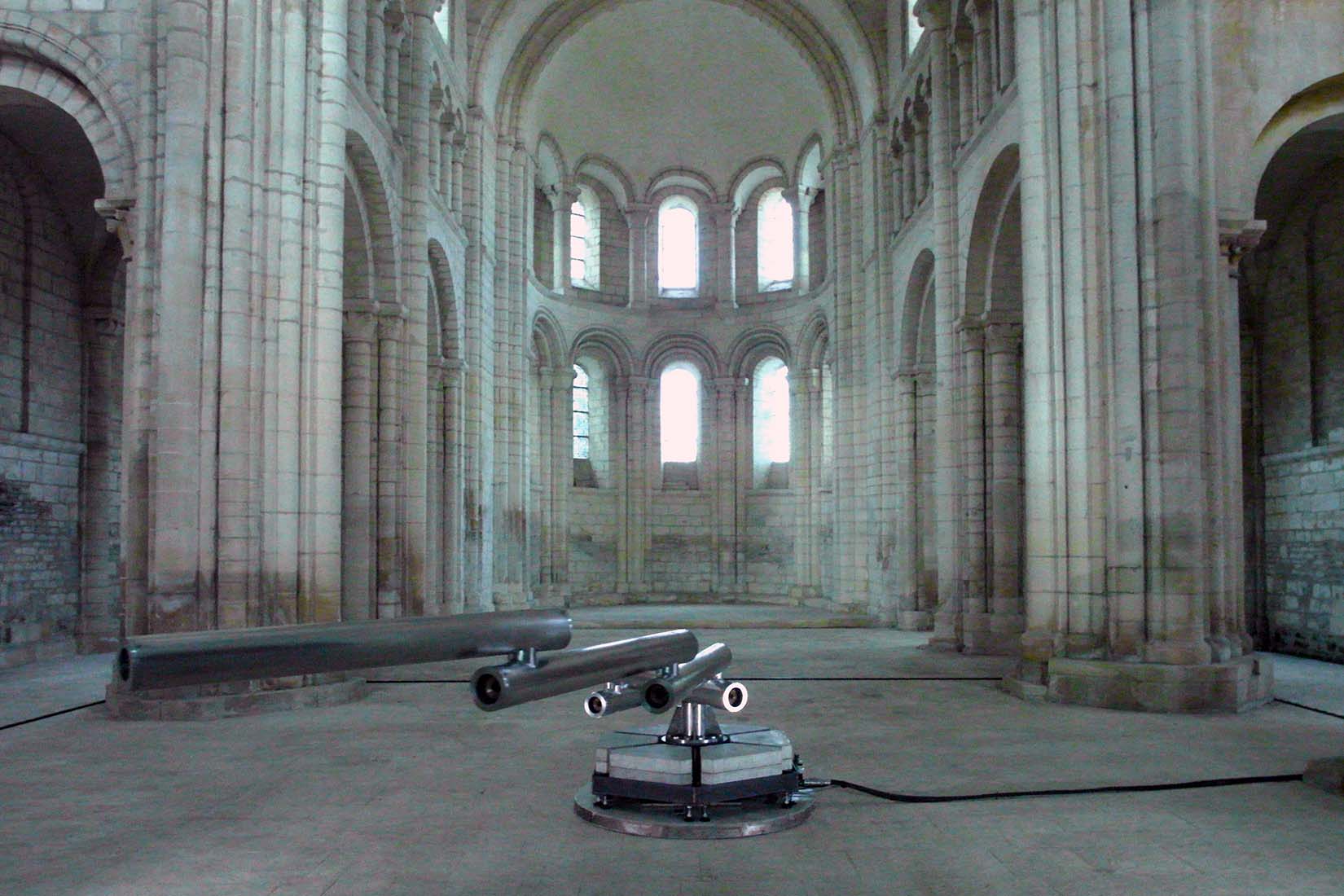 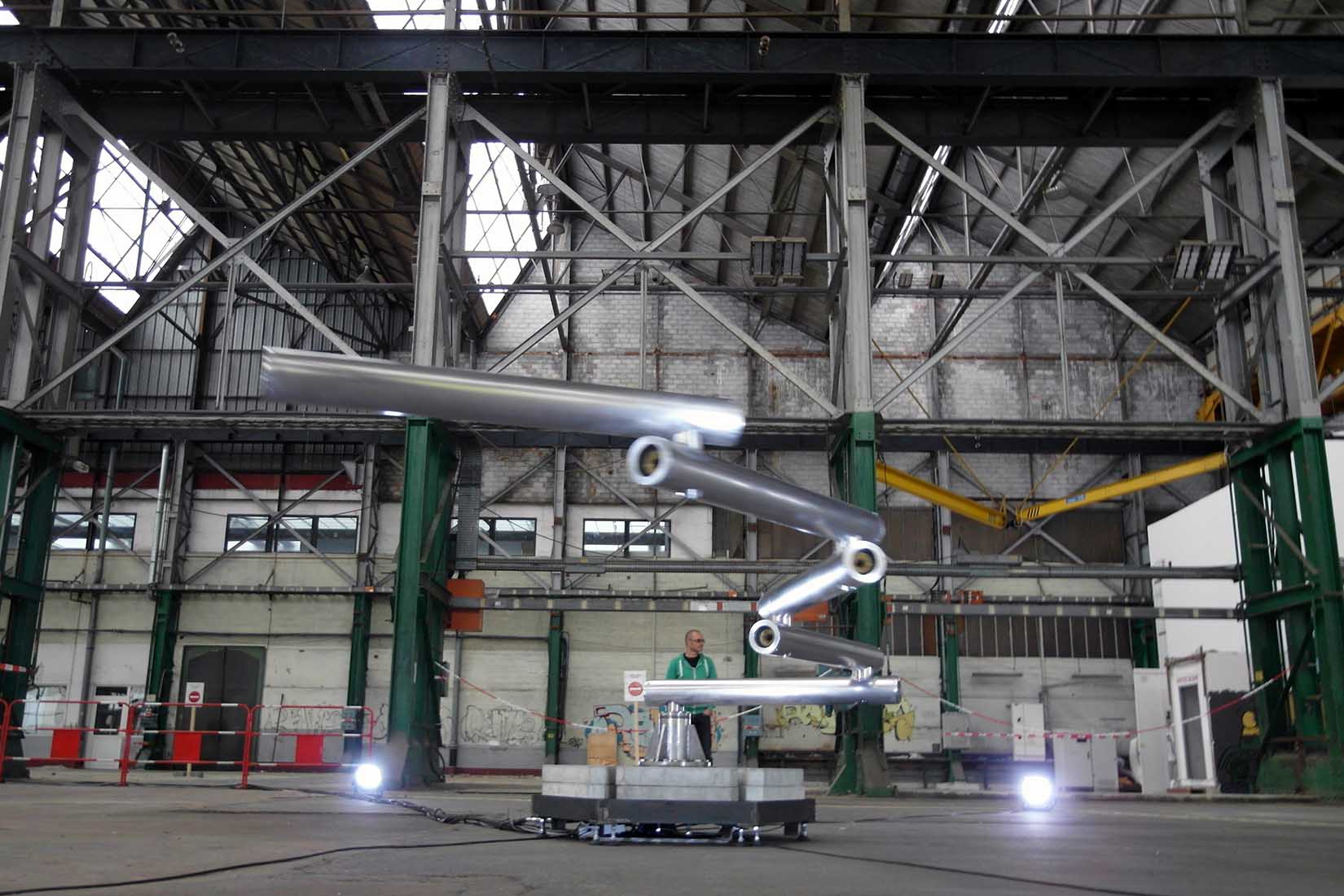 A show-object, a fascinating sound sculpture!

To start off, a desire to approach mechanisms that produce visible undulatory movements and to set them against the development of sound waves. A pendulum. And if this pendulum was made up of horizontally articulated segments, if a motor replaced the gravitational effect? The segments of the pendulum become metallic tubes equipped with sound sources and with measuring instruments capable of making them resonate according to their rotations. A succession of unexpected movements becomes apparent.

The equilibrium in the energy exchanges between the segments is almost perfect; the trajectories are surprisingly right and natural. We’re faced with Harmony. Through its fascinating and hypnotic dance, Cycloïd-e delineates the space of sound orbits and creates a unique kinetic and polyphonic work, in the likeness of the «Cosmic ballet» to which the physicist Johannes Kepler refers to in his «Music of spheres» in 1619.

Cod.Act’s creations are often inspired by sciences. Our ideas mostly arise from the observation of physical, mechanical or even chemical phenomena. We try to capture their mechanisms to present them to the public as public events. Our performances and installations always associate sound and movement and we strive, year after year, to improve the relation between these two to reach a perfect fusion between them. Movements and sound are bound to each other by a cause and effect relationship: the oscillation of the air molecules is caused by the movements of a membrane or the vibrations of a machine, which are transmitted and travel as waves. Movement and sound have thus the same temporal character.

We tried to reproduce undulatory mechanical movements that were visible and similar to the development of a sound wave but obviously on another scale of frequencies. We thus built simple mechanical oscillators (such as a mass and spring, the pendulum), then more complicated, such as pendulums coupled by springs (which produce waves) and cascading pendulums, which produce baffling movements.

While working on these mechanisms, we were struck by the natural harmony of their movements: rhythmical balancing, smooth energy transfer in the waves but brutal in shocks, beauty of the trajectories… We then got interested in a more formalistic aspect of the relationship between the movement and the sound. Our researches lead us to the Ancients who taught music, astronomy and geometry as a whole which concurred to the harmony of the universe. Pythagoras for example stated that in the likeness of the 7 intervals in the scale, the cosmos had seven «planets» and that these had to revolve around the earth at a speed corresponding to the same numerical ratios than the musical scale (Harmony of the spheres). Similarly, in the XVI century, the astrophysicist Johannes Kepler imagined a «Music of spheres», where the sound emitted by the planets was sharper the faster they moved.

These examples tell us that earlier, relationships between sound and movement ? which is what we?re trying to study ? were part of a concept of natural harmony. This concept was represented by numerical ratios and «correct» proportions, which foreshadows current sciences. Based on these reflections, we sought to develop a kinetic and sound object which matched with this relationship between sound and movement and which allowed for a correct equilibrium and harmonious ratios.

We started experimenting with the pendulum, which is at the basis of mechanical oscillating circuits. Because of its constant period, it represents in a way the harmony in the exchanges between kinetical and potential energies. A pendulum only consists in a mass at the end of an arm. To increase the diversity of the movement and obtain an object with more visual and sound attractiveness, we linked number of pendulums with each other so that they would move in the same plane. In order to cancel the effect of gravity, the end of this chain was fixed to a vertical axis, with the chain moving in a horizontal plane. The arm segments of the arm were slightly staggered to allow them to superimpose each other while rotating so that the chain may cover the complete surface of a circle.

Since gravity has no longer an effect on the movement, a central engine gives impulsions, which produce the global movement. As a consequence, we obtain a system that does no longer move in a determined fashion, but in a chaotic, unforeseeable way. Its behaviour is fascinating because of the constant variations of the trajectory of its arm and the constant changes in speed. Slow motions of the arm can transform itself in a rapid rotation of one of the segments. These variations come in part from the random impulsions given by the engine, but mostly from quick transfer of kinetic energy between the different segments of the arm, transfer due to the rigidity of the segments in this aggregate of masses, each carried away by its inertia.

In order to conveniently associate the perception of sound and movement of the object, each segment is equipped with a loudspeaker. Each of them emits a sound directly related to its speed and its position, but also in relation to the state of unfolding of the whole structure and finally directly related to the density of the fluctuations. Since this structure has a diameter of about ten meters and important speeds of displacements, additional sound effects are generated, such as resonances, beats, Doppler effects ?

The articulated arm of cycloïd produces music. The quicker its movements, the louder, enriched and brilliant the spectral tone becomes. The music expresses the mood of the machine, for example with an orchestral scream. Each part of the arm is an instrument which produces its own sounds depending on its activity. These tones come from orchestral instruments like the piano, cello, violin, clarinet, and various percussions. The tones are in perpetual evolution. The interpolation of their spectres produces all sorts of hybrid resonances. From these spatial movements an evaluative harmony is born, a kind of topology of tones which integrates the idea of tone trajectory.

The objective was to create a musical system in relation on the one hand with the machine and its materiality, and on the other hand with the nature of its movements. The amplitude of the movements and their cadence can change very quickly but their sequences always remain harmonious. It was imperative for us to create a musical system based on the notion of harmony, meaning simultaneous tones and their concordance. The harmonic system should develop and react naturally according to the physical parameters of speed and forces occurring along the arm. In the musical domain, energy and forces produce sparkling and luminous music. The louder one plays, the more the tone of the instruments enriches itself with partials or harmonics.

We have developed our harmonic system of tones according to this principle. It allows us to build, develop, increase or reduce spectral tones in relation with the movements of the machine. First we recorded short musical phrases from acoustic instruments, like the clarinet, cello, violin, piano and various percussions. Then we analysed their tones to extract the frequency and the amplitude of each harmonic. During the performance, oscillators play these values and the tones are then reconstituted in relation to the movements of the arm of the machine. The oscillators can select and play only a few harmonics, for example the odd harmonics or a series of those belonging to a small frequency range. The oscillators can also perform all sorts of modifications on the parameters of these harmonics, for example by raising the frequency of some of them. The result is a spectral inharmonicity. They can also raise the amplitude of selected harmonics to accentuate a tonality.

During the performance, sensors fixed inside the different parts of the arm control the composition of the tones. A very rich electro-acoustic work is produced with all its parameter running in relation to the random choreography of Cycloid.

The technical realisation of the structure is complex. The random dynamic of the structure generates a number of forces with a wide variety of amplitudes and directions, which are very difficult to calculate. Centrifuge forces exerted on the arm during a rapid extension of the system generate shocks followed by oscillations which, given the importance of the mass of the structure, can enter into resonance and compromise the fluidity of the movements. The articulations must have a great rigidity to withheld eventual shocks.

The choice of material for the arm was dictated not only by factors of static and dynamic resistance but also by the material?s vibratory characteristics since the segments play a role as sound interface. The structure was constructed using high resistance aluminium and all the joints were welded. The rotation axes are made of steel and are held in roller bearings with conical rollers. The interior of the tubes is partially covered with polyurethane foam for an optimal management of resonances. The interior of the axes is equipped with incremental encoders and gyrating connectors connected to the central computer. A hydraulic pump with radial pistons operates the sculpture.