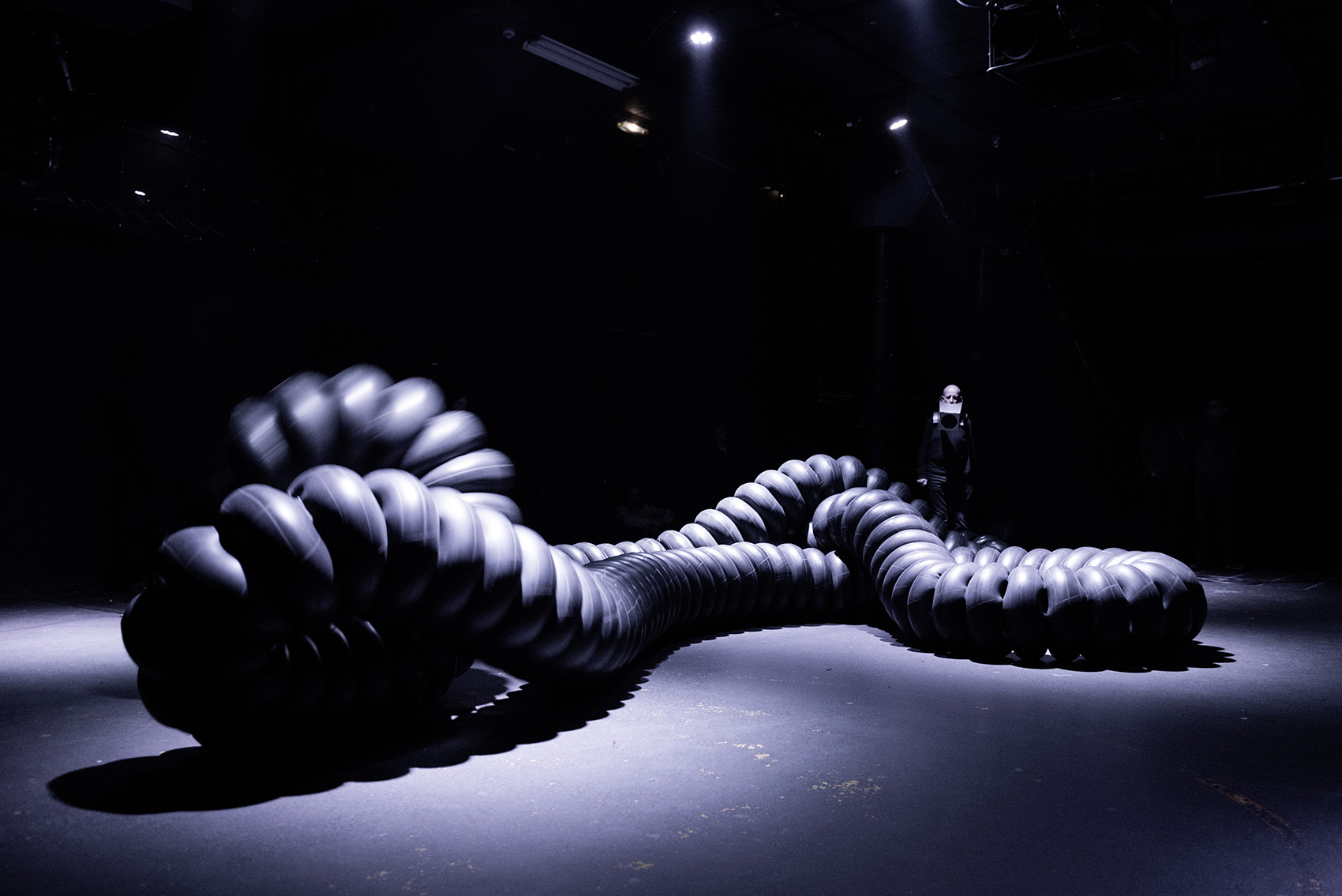 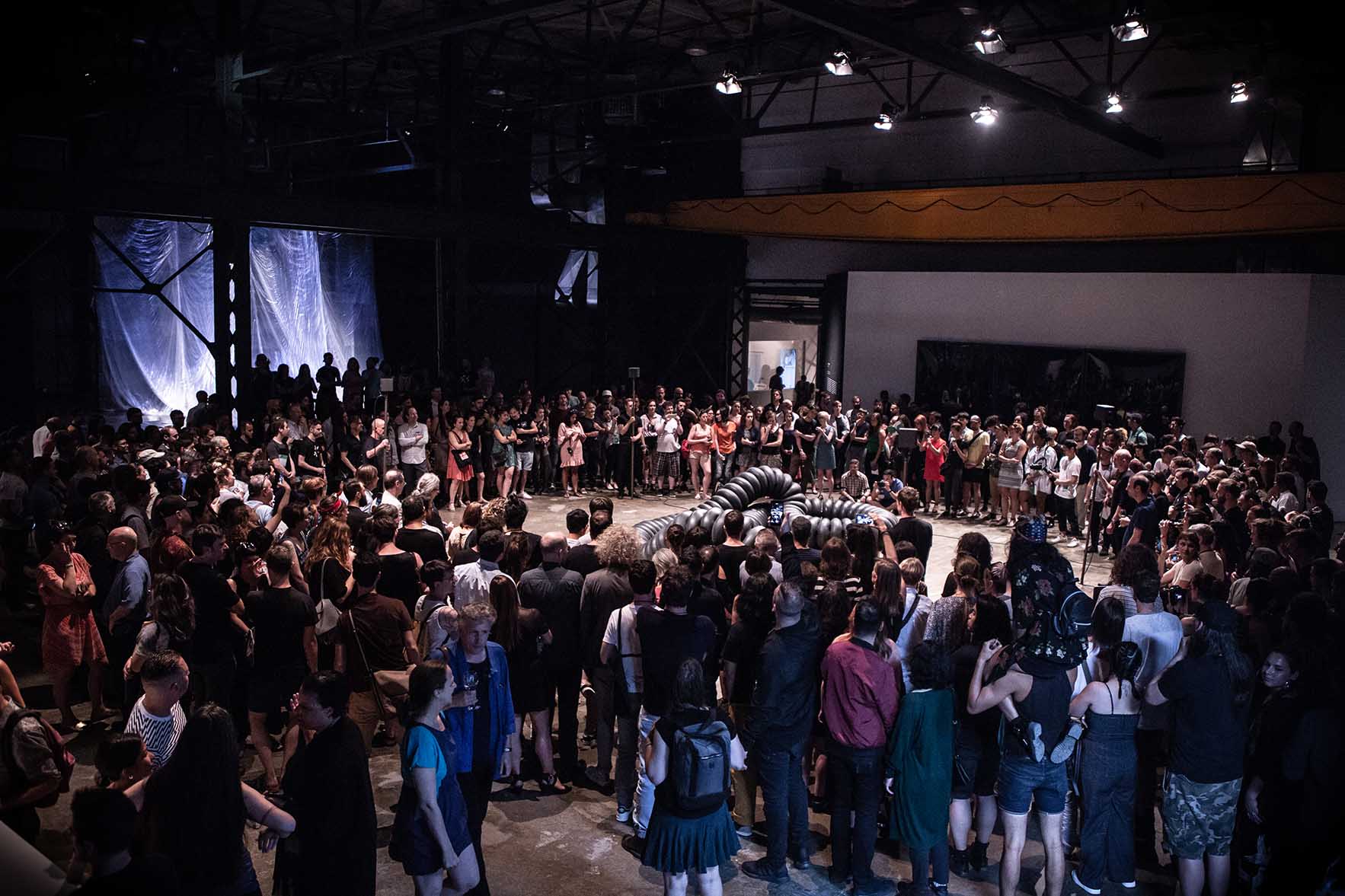 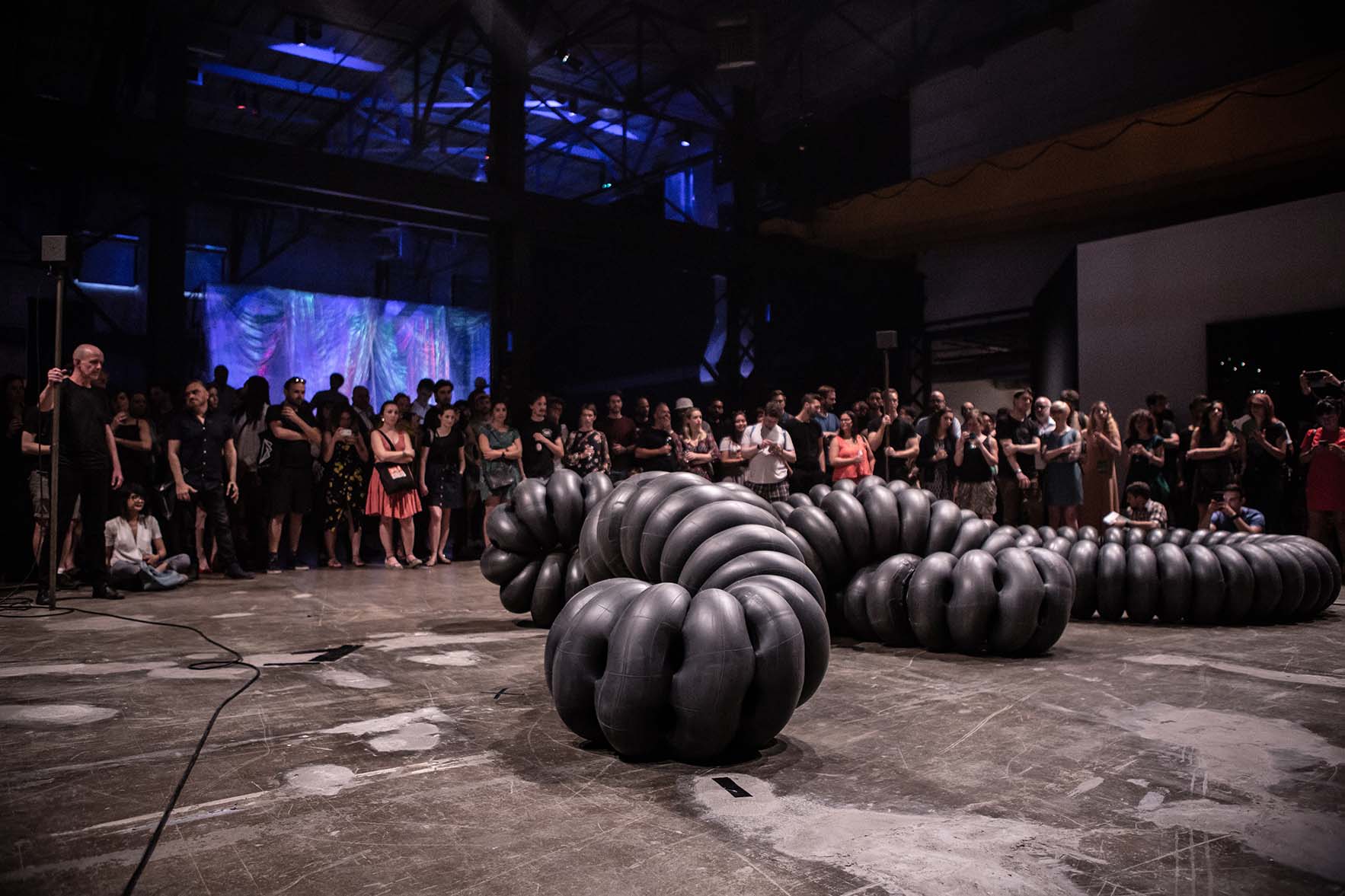 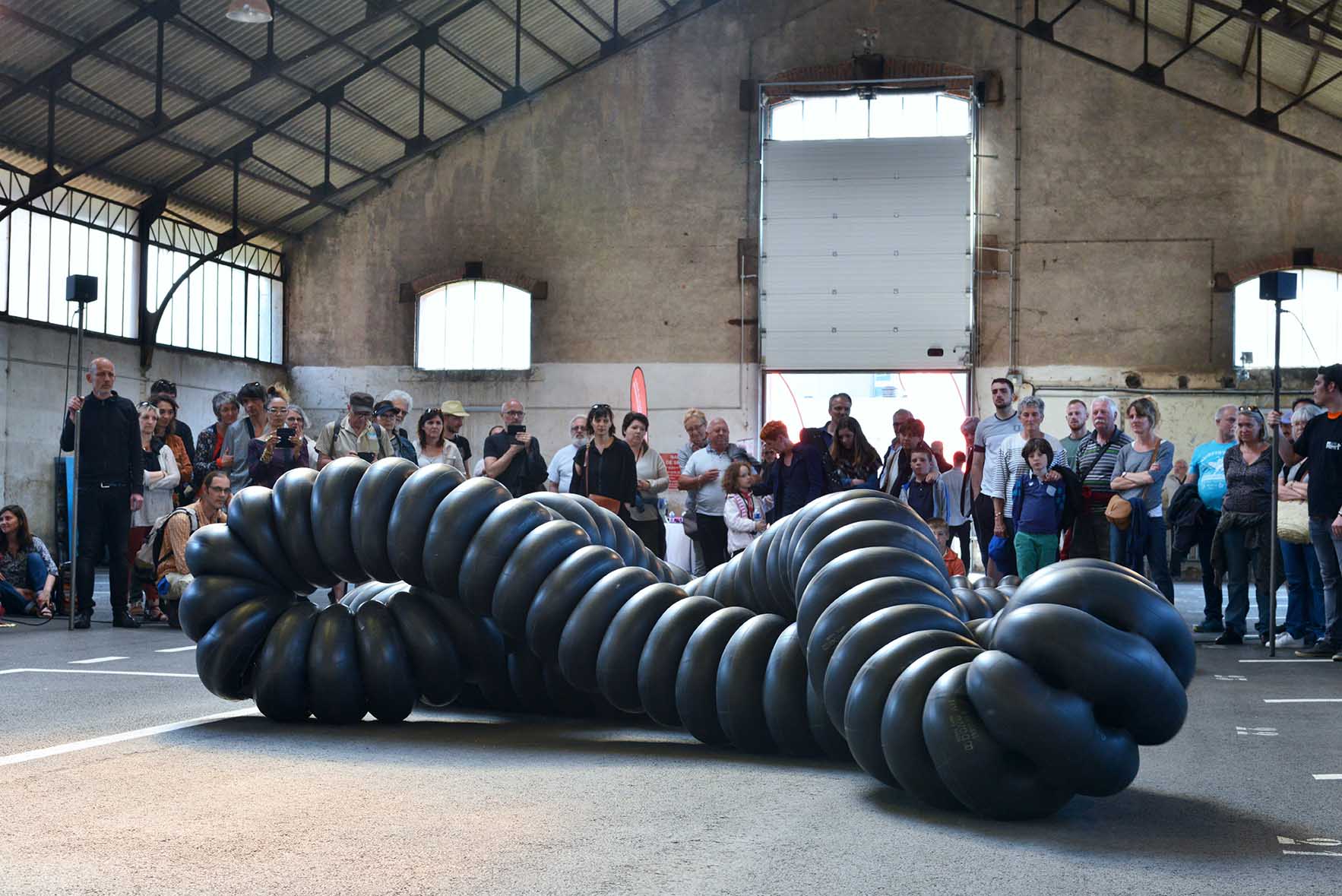 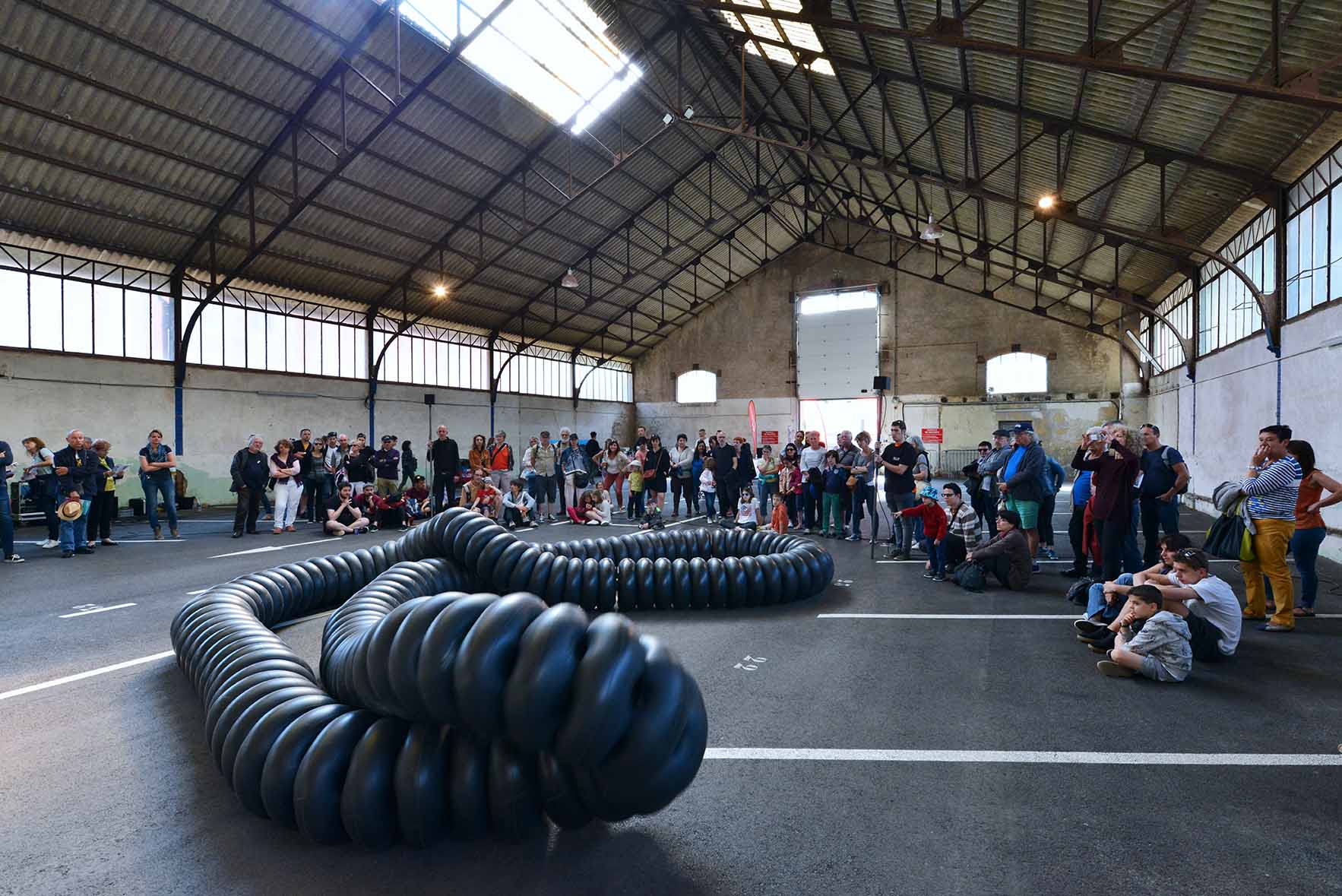 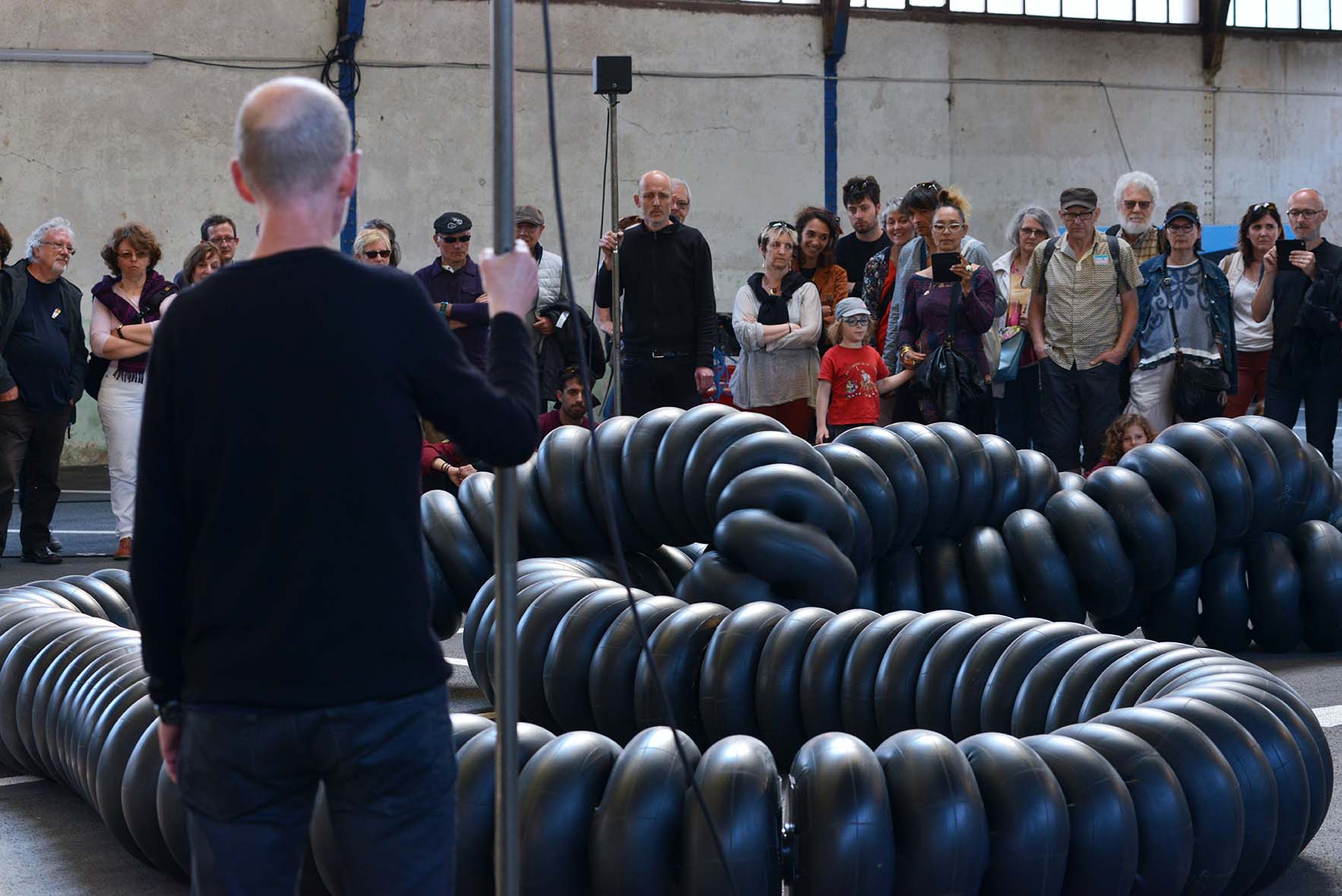 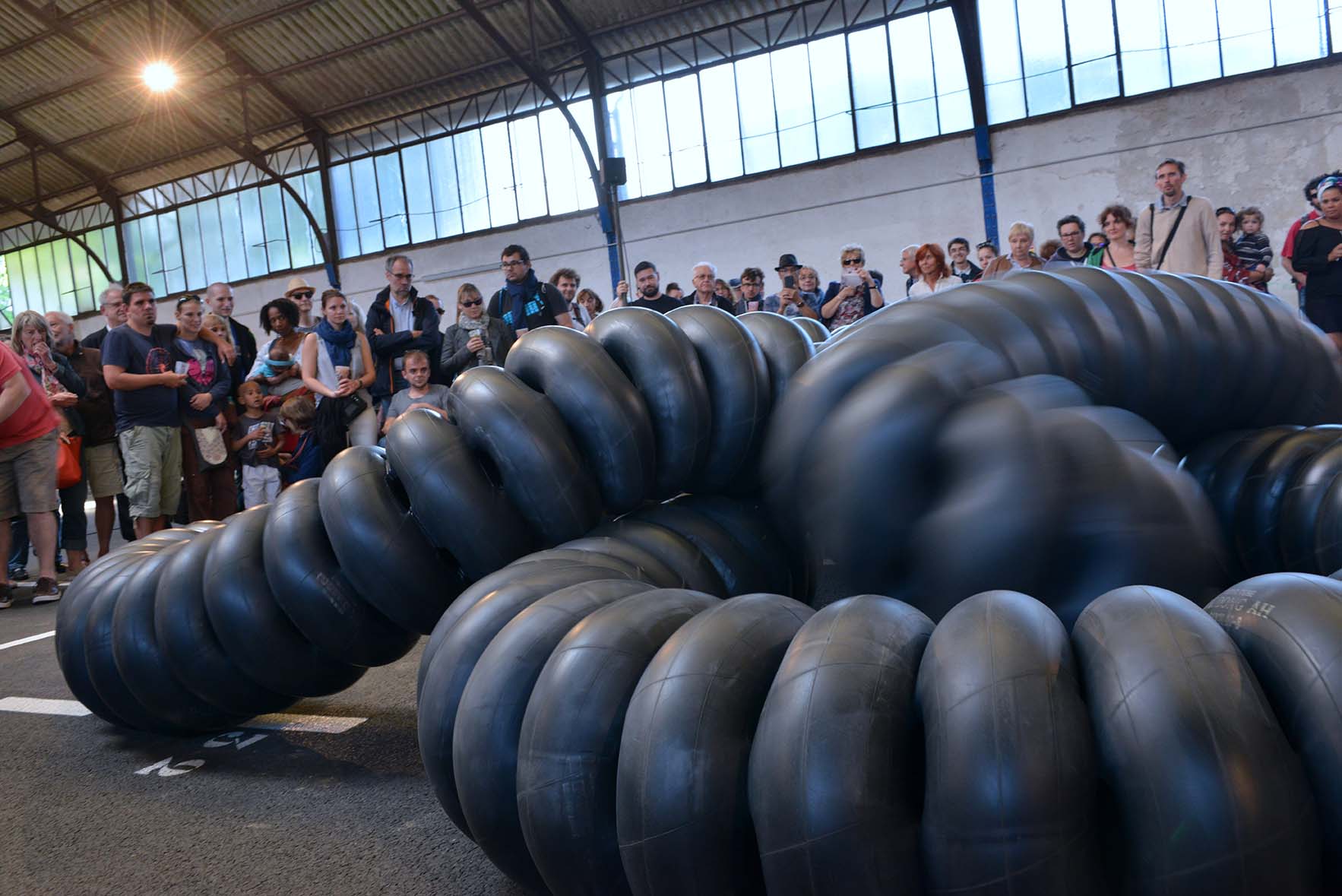 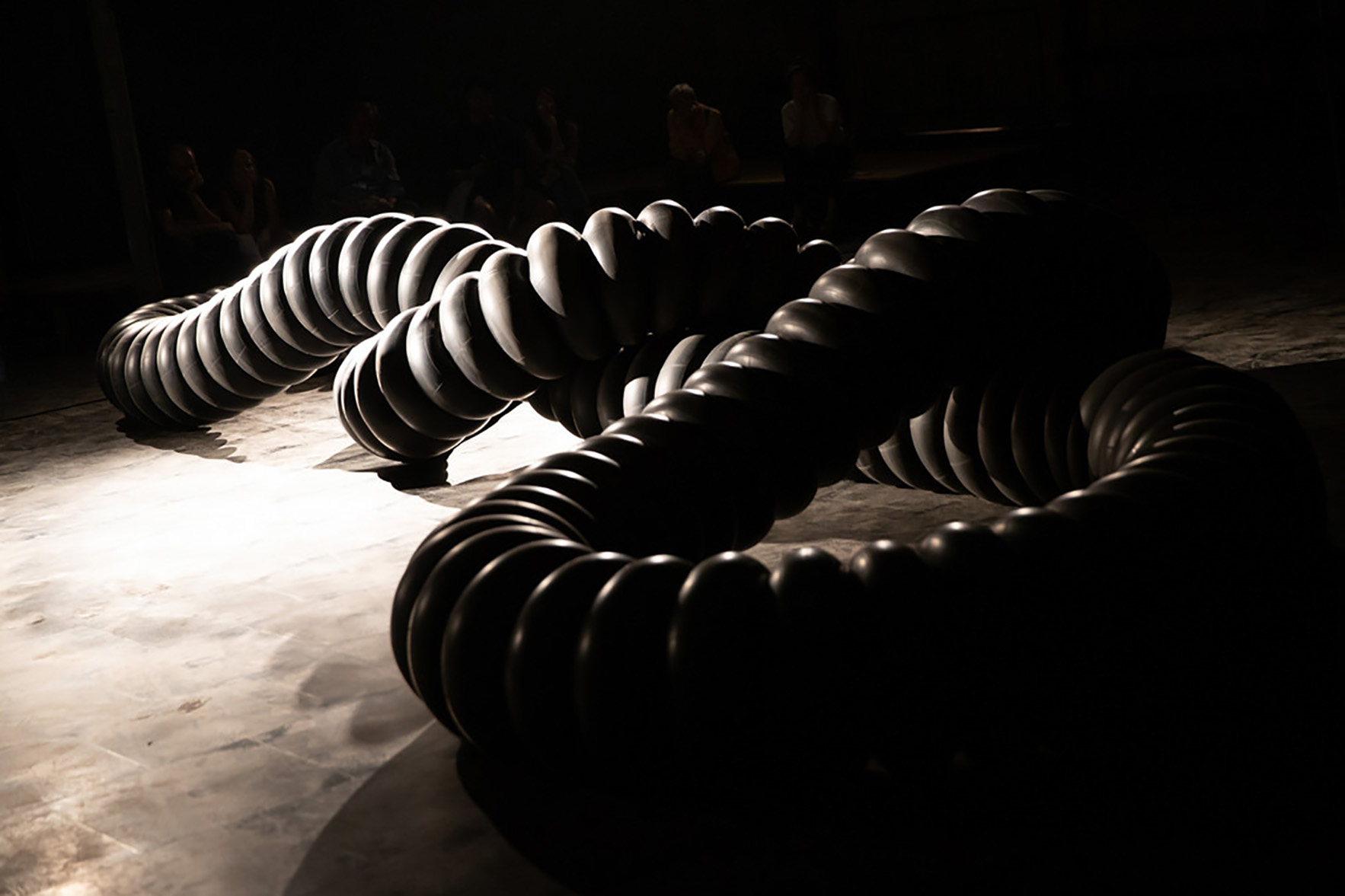 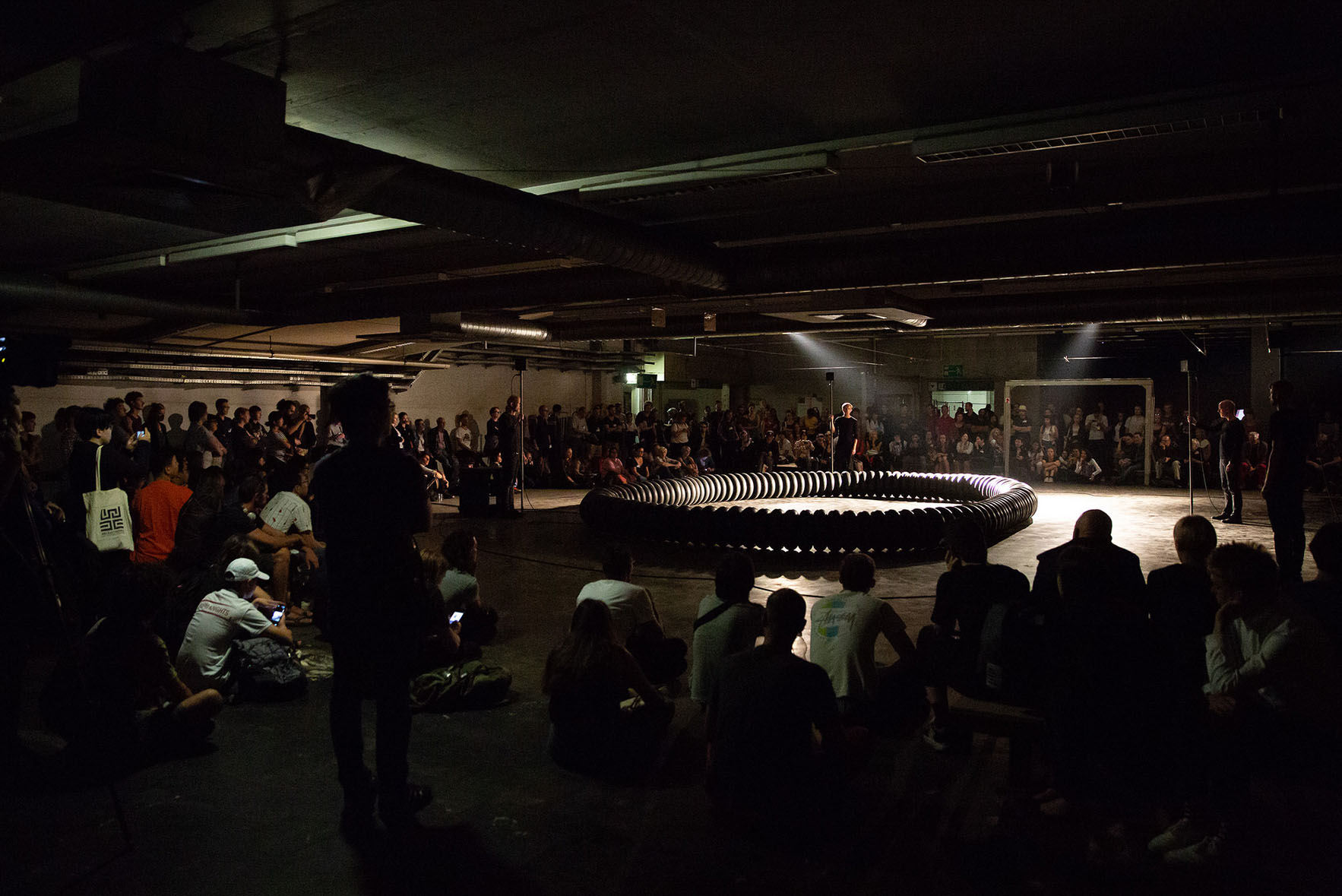 πTon is an intriguing sound installation; it constitutes a new stage in the Cod.Act researches on plastic and sound organicity. It results from an experiment on the relation between the distortion of an elastic structure and a real time human voice synthesis.

A long rubber tube, closed in a loop, is animated by contortions and undulations like an invertebrate body. Surrounded by a group of four dumb human beings equipped with loudspeakers, the creature seems to try to release itself from this disturbing presence in vain. Its efforts and sufferings excite the curiosity of the four human beings and become the subject of primary and sophisticated polyphonic rituals only constituted by synthesized voices.

From raw materials and natural physical phenomena, πTon associates organic movement and vocal expression under their most primitive forms. The result is a striking sound and visual event that sends the spectator back to the origins of his behaviour.

The mechanical and plastic aspect

Our research represents the continuity of the researches undertaken for the realization of the installation Nyloïd, in other words, the exploration of elastic materials and simple structures that deform themselves in an unpredictable way under constrain. The purpose is to use their movements to create an evolving musical work in real time.

After the experiment Nyloïd, we focused our researches on the structure and the anatomy of the kinetic object. We tried to make it the simplest possible by remove articulation and assembling points. This procedure led us to look for rudimentary geometrical forms belonging to our natural environment.

We became interested in the torus. By examining a rubber ring, we noticed that a small twist applied on it could produce an important deformation on the whole ring. Because of its continuous and edgeless geometry, forces can circulate in the elastic body in a fluid way without impediment. Energy can then accumulate and release itself uniformly, thereby creating soft and graceful movements. The deformation of the material is very natural, comparable to a living organism that tries to move efficiently with the least possible amount of energy.

To bring more diversity in the curves of deformation, we increased the number of twisting points inside the ring. The system becomes then unpredictable. Opposite forces produced by varying directions of twisting bring more violent and reactive dimension to the fluidity of the movements, as if the body had a nervous system. The rudimentary ring structure and the simplicity of its movements evoke a primitive creature that belonged to the first life forms on earth.

πTon is a large-scale implementation of the experience described above. It consists of a ring of eight meters in diameter consisting on 120 welded rubber tubes. The twisting points correspond to five engines fixed inside the ring. They split the tube in five identical segments. The synchronization of the musical device with the movements is made possible by measuring the velocity of each of the five segments.

Four loudspeakers are located in the space in which evolves the kinetic creature. They seem to observe it because they react vocally to his activities. To avoid to being attacked by the creature that can sometimes be unpredictable, the loudspeakers are mobile. Each of them is transplanted on a person, as an implant. Just like keepers, these four persons stand around the creature and move if required.

Through their loudspeakers, they diffuse synthetic litanies with primitive character, which seem to address the creature. These devices or manifestations have a supernatural and mysterious character. They seem to belong to a symbolic or religious ceremonial.

The synthetic litanies sung by the four loudspeakers are articulated in sequences. They are created and develop themselves in relation to the activity of the creature. Besides, these four voices interact with each other. Intensity and expressive strength that come from the organization and the harmonization of the voices highlights their link to a codified practice conducted by a kind of collective consciousness.

The four artificial voices are neither completely vocal nor completely different to the human voice. Their abstract character evolves between embodiment and mechanization.

πTon intervenes in the continuity of our researches on interactive organic sound synthesis. For Nyloïd, we where interested in the articulation of the spoken voice. For πTon, we developed our musical idea from the continuity and melodic notions that characterise the sung voice. Regarding the relationship between movement and sound, πTon proposes a new kind of relationship. The sound is controlled by the kinetic sculpture, but it is assigned and diffused by elements belonging to the context in which the creature evolves. The context is composed by the four human beings that behave like witnesses or observer of the action. We are also interested in the relationships between these four persons and developed musical interaction simulation.